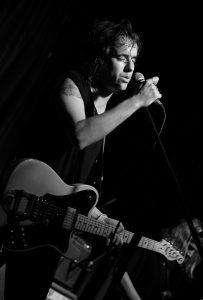 Gullivers, a pub and performance space in Manchester’s Northern Quarter, is known for the eclectic mix of artists and musicians it puts on its upstairs stage. I had high expectations of the combination on the 4th October; headliner Johnny Lloyd on his UK-wide Dreamland tour, supported by the RPMs and Crimsons – as the gig had impressively sold-out on a chilly Tuesday night.

Considering the sold-out status, the performance room was surprisingly quiet when Brighton-based three-piece the RPM’s took to the stage. Yet thanks to their energetic indie-rocking, with some catchy pop rhythms sprinkled in, they managed to draw a crowd forward. Jack Valero takes both guitar and lead vocals with an impressive amount of energy. He keeps up this stamina on tracks like ‘I Think It’s Stupid, But I Think Its Love’, whilst still maintaining style – a winning combination – that attitude of energetic fun which reminds me of the early Pigeon Detectives.

‘Protest, power pop and someone had smashed a glass on the dancefloor within the first 15 minutes’

The band seemed to be enjoying themselves, with plenty of personality (as well as a great feel of groove) on the bass thanks to Miguel Cosme, whilst Callum James on drums keeps the energy up; seemingly well-inspired by their number of festival appearances this year including 2000 Trees and Glastonbury on the BBC Introducing stage.

At times, the vocals seemed a little unclear within the mix, the drums perhaps more of a boom than beat –   but was it intentional? Either way the RPMs drove up enthusiasm, even getting the audience involved in one of the final tracks ‘I don’t like it’; bringing their own protest-style placards!  Protest, power pop and someone had smashed a glass on the dancefloor within the first 15 minutes. Welcome to Manchester.

But if the RPMs took us back to the pop pleasantries of summer, then Crimsons take us a step further and capture a sound which takes us through wider time – wild waves of sixties psychedelia seduced by progressive rock. This Manchester based three-piece take a refreshingly alternate edge on the current music scene here. Initial impressions of the three men on stage, dressed in flowing shirts, flickering jewellery and equally flowing hair, suggested a psychedelic stage presence close to that of early Pink Floyd or perhaps The Kinks. But the sound is much heavier than that – and welcomingly so.

‘A refreshingly alternate edge on the music scene here’

A number of tracks, including the single ‘I Bring The Rain’ are permeated with lead singer and guitarist Sam Cartwright’s distinct vocals, his voice wavering on the edge of a wail at times in a way which is fantastically feline. Not a bad thing at all. With a sound which strays from so many of the young male-led bands in the North at the moment, Crimsons turn their tunes of love, longing and identity into an alluring animal – with a slinky, sashaying body of tracks thanks to Lucas Berry’s confident bass, driving drumbeats and spiralling guitar, also from Cartwright.

It certainly was a treat of an evening showing the impressive capacity of onstage musicians – and Adam Kenny’s drums on this single in particular take special mention.  He is an artist not just building a beat, but capable of creating so much well-co-ordinated sound (whereas other bands would quickly find themselves in need of a fourth member) and ensuring that Crimsons keep up the alluring power of creating a liveliness which sounds like well more than three people. Think the artistic moodiness of The Cure combined with Kraut-rock sensibilities of earlier bands such as Can. 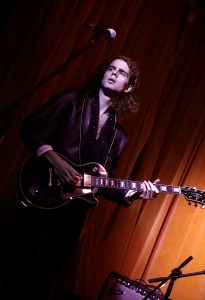 ‘Exploration of how identities blossom in a busy society, like a crimson flower amongst a crowd’

The stage floor filled, crowd clapping and creating alternately (along with some inspiring sixties-style dancers) at the catchiness of the rhythms, with a particularly seductive rendition of ‘I just want to make love to you’, Cartwright clutching the guitar through spiralling solos in a show of effortless talent.  There is something stand-out about the presence of these three on stage however; the chemistry clear in their eye contact, drums and bass co-ordinated in a way which makes this aforementioned ‘animal’ even more alluring; their deep, powerful sound paired with the ethereal tone of the vocals to a create a glossy layer of the gothic too. It makes the theatricals of the band seem appropriate, not overdone, in their exploration of how identities blossom in a busy society, like a crimson flower amongst a crowd. 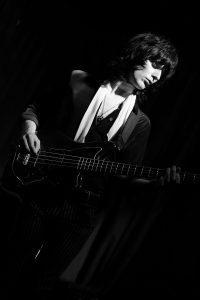 Their second single ‘Idle Days’ will also be celebrating its launch on the 24th October, along with a party at Gulliver’s on the 31st, and I have a feeling it is going to be something special.

Johnny Lloyd certainly had a highly-charged audience therefore for when he took to the stage, the upstairs performance space by this point full to bursting – many in anticipation of how the former Tribes frontman would perform his Dreamland EP. With tracks including ‘Hello Death’ a dark-tinged reflection of transition and loss, produced by Jamie T, seeing it on stage was an experience in itself. Although Lloyd as undergone a number of ‘goodbyes’ over the last few years, moving on from the band Tribes, as the carefully-penned lyrics reflect, he is forging new connections – something his performance illustrated.

‘Capability not only to move the audience emotionally, but physically‘

The connection of Lloyd to his band was just one of the notable qualities of his performance – with excellent chemistry between himself and the other lead guitarist, brought together with bass and drums. It was a stage presence powerful enough to take us through tracks like ‘Dreamland’ itself and yet equally capable of paring back when appropriate to the mood – such as when Lloyd infuses his lyrics with emotion, eyes sparkling over the repeated refrain in Hello Death – ‘Mother I’ve been as wicked as the rest’ in what was one of the most memorable tracks of the night. It moves away from the  grungier feel of Tribes and into emotionally harder rock, a little like that of the material of Elliott Smith.

The diversity of Lloyd’s talent is also clear is his capability to not only move the audience emotionally, but physically – with anthemic, arms-in-the-air tunes such as ‘Happy Humans’ which had the whole room smiling with the chant-like ‘happy humans in love’. For a band clad all in black, featuring four altogether if counting Lloyd (unlike the support bands of three members) they gave a surprisingly sensitive performance which had the audience not just engaged but enthused, including the very popular track ‘Pilgrims’. This takes skill, as is clear in the well-crafted ‘Dreamland’ EP.

A night not just entertainment, but musicians emerging into new sense of strength. I didn’t just go in feeling excited, I left feeling excited – looking forward to all the potential that is to come from artists like this. Gulliver’s again showing itself a place for real musical gems in Manchester. Fabulous.

To find out more about Johnny Lloyd, the RPMs and Crimsons, you can visit their pages.