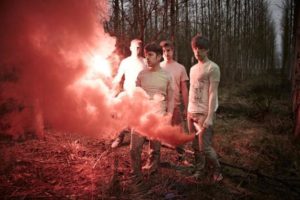 Manchester is crazy these days.

The gigs come at you like bullets from a machine gun,

Whilst the rest of the Uk is in gig recession it’s getting busier and busier here.

The Manchester band are playing on 28th March.

Their last album got an 8/10 on Louder Than War – electronic/psychedelic style band with shades of Pantha Du Prince in their patchwork.

Last time they played they sold out St Philip’s Church in Salford and with Arts Council funding re-worked their tracks for the setting and included Manchester Community Choir into the songs too.

This time they’re playing behind a projection of 3D visuals and giving out free 3D glasses to everyone who comes down.

We’re excited to say that Manchester’s astral psych/shoegaze pop four-piece Patterns will return in March! After selling out St Philip’s Church in Salford last year they’ll be playing The Deaf Institute. The gig will include bespoke visuals created by Plastic Zoo visionary Sam Alder and involve 3D projections on multiple screens to illustrate the drones and loops in their hallucinogenic music. More details about this pioneering approach will be revealed in the coming weeks, but rest assured 3D glasses will be provided to every ticket-holder for free!

Last year’s sold out album launch at St Philip’s Church saw the band rework songs from the record with Manchester Community Choir to create something truly unique and befitting of the serene surroundings. The album itself is a soundscape awash with shimmering synths and delicate guitar melodies that’s garnered praise from all sides of the music press with The Guardian, NME, The Skinny, and Clash Magazine, lavishing praise. Now, in the build-up to their second album, come get the full sensory effect of their new material in this bespoke atmosphere.