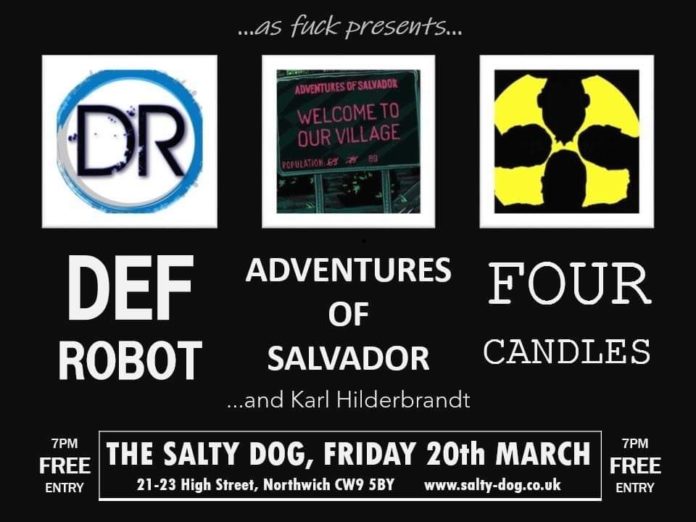 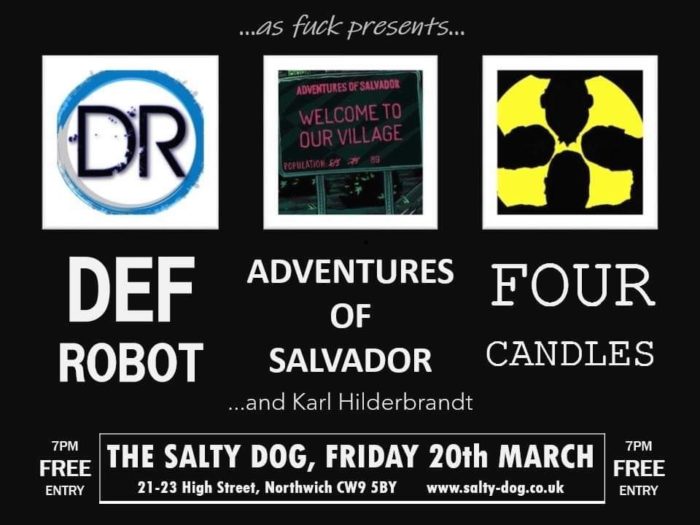 Wayne AF Carey previews a gig he has put together at his favourite venue. A startling triple bill of Louder Than War tipped bands. A strong line up which sees the debut of mass-production music-machine Def Robot. Album eight is already recorded.

The time has come! Def Robot are probably the most prolific band of our times. Releasing seven albums since May 2019, each one a mix of grunge, Americana, film noir, punk. You decide. They make their live debut at one of the best new and old music venues in the country. Louder Than War were there from day one. I’ve seen their set list and it’s the cream from all their albums! Latest album review

Adventures Of Salvador played The Salty Dog a few years back. Since then they’ve released the brilliant 2nd album Welcome To Our Village on the Manc German Shepherd label, which was in our top 20 albums of the year 2019. Going from strength to strength they return with their Fall meets the Cramps theremin tinged madness. Definitely worth catching live! Album review

Four Candles are another German Shepherd band that have graced the pages of Louder Than War. Their album Nettle Rash got a glowing review from one of LTW’s most senior punk writers. An abrasive album full of wit and downright punk blasters. Lead singer Ian Moss is a frontman with more knowledge than most. He’s also a published author of the book 100 Unhip Albums. Book review

And to top it all off we have the pleasure of Professional Manc Gobshite poet Karl Hildebrandt to make us laugh, ponder and sometimes cry with his gritty street style poetry touching on all subjects like homelessness, mental health and the general state of the world. He’s also funny as fuck!

And you know what? ITS ALL FREE!! Get yourself down to witness three quality bands and the debut of Def Robot.

(Should I be encouraging ‘gatherings’ in the current climate of fear & panic? Wash your hands, say it not spray it and pack tissues with your beer-money. x )