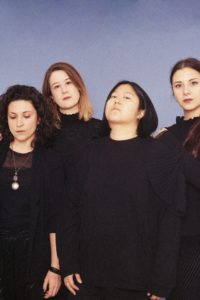 Louder than War’s Ioan Humphreys falls in love with the post punk bass and spiky guitars of GHUM.

GHUM hail from Spain, Brazil and London, and they bring together a mesmerizing, diverse mix of grunge and post-punk. Following radio play on BBC Radio 1 and BBC Radio 6 Music, the rising London based band have honed their sound and on the 28th June they release their brand new EP ‘The Coldest Fire’ on Everything Suck Music.

The ‘Coldest Fire’ follows the release of ‘Get Up’, the second track on the EP, which Steve Lamacq made his single of the week – his ‘Lamacq Livener’ – on BBC 6 Music.

The EP opens with ‘Saturn’ and it has a lovely throbbing bass and a searing guitar sound. The vocals come in and they have a laid back and laconic delivery that spreads throughout the four tracks. The noise builds and builds until an all encompassing wave drenches the last third of the track in sonic dissonance.

Lamacq favourite ‘Get Up’ has (yet again) an absolutely gorgeous bass throb mixed with spiky guitar. GHUM have mastered the ‘Loud Quiet Loud’ recipe to a tee and the track is intense, noisy and ballsy.

‘1000 Men’ is a more measured affair with more controlled guitars which allow the ethereal vocals to wash over. Yet, with the refrain of “100 men can’t keep me safe”, the lyrics give an altogether different message which is quietly seething below the surface. Very clever.

Final track ‘In My Head’ is again a more sedate track that owes a lot to Joy Division with the bass and drum sounds. Again, the vocals are laid back, but delivered with a ‘no fucks given’ attitude. Throughout the 4.20 there is unruly guitar and an equally noisy guitar solo that breaks up the track nicely.

GHUM are a welcome addition to the current crop of post punk guitar and bass driven bands that appear to be re-setting attitudes, bashing down walls and creating a scene that is incredibly fertile, all encompassing and inclusive. GHUM are refreshing and I can’t wait to hear what they come out with next.