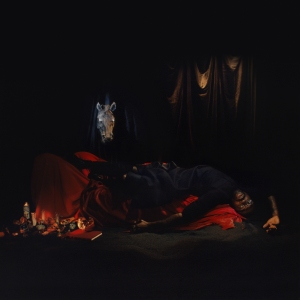 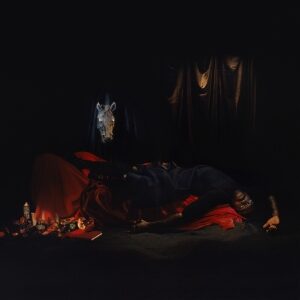 Ghostpoet – I Grow Tired But Dare Not Fall Asleep

Ghostpoet’s fifth album is an eerie and prescient mediation on the state of our nation and an increasingly uncertain world.

When two-time Mercury Prize Nominee Obaro Ejimiwe – aka Ghostpoet – was recording this album at the back end of last year he couldn’t have imagined his distinctly dystopian worldview would come true thanks to a global pandemic.

Ejimiwe also decided to do the production himself, which has paid off as he expands his musical palate with touches of alt rock here and there, as well as more moody trip hoppy pieces suiting his deep, moody vocals. Not surprisingly it’s a bit off kilter at times as he was listening to Gang of Four, Can and Serge Gainsbourg who all in very different ways break the rules.

Breaking Cover sets his stall out with some tasty guitar slashes, squelchy electronics and rumbling bass as Ejimiwe suggests our complex lives and rampant consumerism are making us less than happy, “Too much noise/I can’t turn it off/Panic attacks/I need a break.” It ends with a fuzzy out of tune radio that rather sums our not so brave new world.

Lead single Concrete Pony kicks off with an air raid siren before adding driving beats and female backing vocals as he takes down our unhealthy obsession with social media and devices, ‘How can I measure my life/Oh yeah/Emails and digital likes.’ Quite

Ejimiwe’s parents care from Nigeria and Dominica so the electronic pulses underpinning Rats In A Sack is a welcome riposte to little Englanders who don’t see anything wrong in hounding the Windrush generation who were invited here to help rebuild our nation after World War Two. You won’t hear a more important line this year than, ‘wind rushed and chilled me to the bone’.

The title track is the most alt rock track, and is almost grungy in parts, but it’s Ghostpoet admitting to his anxieties as contemplates leaving for Ecuador for some reason, and looking for the kind of of peace he doesn’t see in the world at the moment. He is almost afraid to close his eyes as, ‘Who knows what will await/If I fall too deep.’

It would be doing this ambitious artist a disservice to suggest this is just a misery fest as the musical background is always inventive, featuring some quality vocal contributions from Art School Girlfriend, Skinny Girl Diet’s Delilah Holiday, SaraSara and Katie Dove Dixon. As he jokingly points out this album “didn’t need my fucking dirge of a voice for the whole record.”

That isn’t true as his clear voice questioning our messed up world is timely posing many more questions than answers.