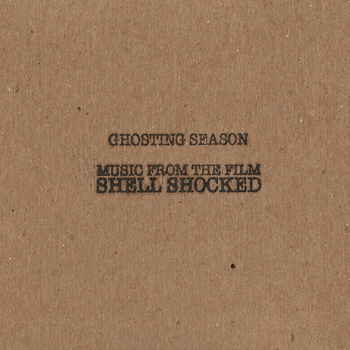 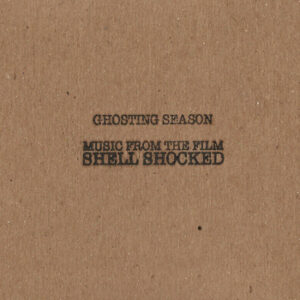 “Hell is empty and all the devils are here”, opens Dominic Brunt’s short film ‘Shell Shocked’. The Shakespeare quotation eloquently sums up his cinematic vision and also Ghosting Season’s chilling use of uncluttered spatial sound illuminating the darkness prevalent through much of the film itself.

Not being that familiar with the electronica duo from Manchester’s other work which from the little I’ve heard is in tune with dance/clubbier territories, but their liking of Krautrock is most welcome and evident here. This soundtrack exposes an inner-ear beauty of sound and the vision it can create. Opening with reverbing sonic boom, shimmering splintered tones emerge from its groundswell. Disfigured voices surround and a deep crushing mental anguish enfolds. Spinning coils of light (sound) rush and glide before the most brutalist percussive sweeps deaden and a short bass-sequence suffocates and kills. End? No, spirit rises briefly again with spiralling keys and drones. The softness of this last piece mirrors the complete opposite of the final film scene. I like that a lot; false hope!

As for the film itself, its claustrophobia is brilliantly shot and a true testament to real film-making. Two war-ravaged soldiers on opposing sides, one from the North of England, the other German, both seeking refuge in a disused mine whilst the workmanlike task of bombs and death continue overhead. A tense, gun-trembling stand-off ensues before they gain each other’s vague notion of trust. Eventually human frailty overtakes the German, but shortly after there is one final twist – which if you already know the director (not from his Soap day-job I hasten to add), you may just have a slight inkling into what that might be? The whole is a highly engaging, revealing look into the human psyche and also plays on our one-sided defining of all WW I & II German soldiers being inhuman and animalistic in both crucial moments of the film. A crawling engulfing deluge for the mind.

Soundtracks are often difficult things to stand alone but I would easily place this alongside something as equally enthralling as Hilmar Orn Hilmarsson’s ‘Children Of Nature’. Both quite different musically but each highly charged with an impressive palate of cerebral sounds for closed eyelids as well as the film they collaborate with. Sadly Ghosting Season’s only lasts 12 and a half minutes but then that is simply the duration of the film. Perhaps with more encouragement they may evolve further into experimental areas? Hint! Hint!

The band have made a very limited number of hand-stamped ‘Shell Shocked’ CD’s in foldout wallet which also include the film. Be very quick – head to their Bandcamp page.

You can also follow me via Twitter @deadhead_TEQ and @bazzanagnagnag the latter where I babble endlessly on music, horse racing, politics, life and society (lack of); expect bad language.