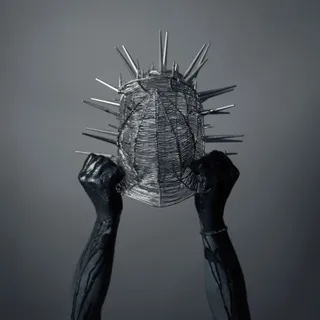 Perhaps the most ground breaking genres of the last decade have been fringe rap, black metal and the pounding incessant mangled machinery of industrial. The forms have been pushing the sonic envelope in ways that so many other styles haven’t. To combine them and create a whole new form would seems an easy move but it is a challenge that has been tried and failed so many times.

From Florida and now in LA, Ghostemane has been mining this seam for a couple of years with a series of releases that explore dark dystopian obsessions with a CinemaScope glee. His records are dark, intense and heavy and his devilish style is like a 21st century Marilyn Manson that sees him poised for a superstardom. There are hints of NiN and Ho99o9 in the mix as well.

Like his fellow Florida anti christ superstar this is the perfect confluence of the darkness at the edge of every town. A dystopian dancehall vision that is played out in his brilliant youtube videos that have been key in sending out his message. As ever the darkness is a shield for a touching insecurity and artfulness and his songs deal with this and also a post pandemic spiritualism that attempts to fill the emotional and spiritual void with astrology, witchcraft, New Age symbology, and other dark arts and mystical practices.

Ghosteman emerged as part of the sprawling online rap collective Schemaposse, a group headed by former Raider Klan member JGRXXN that also included Lil Peep. It gave him a platform but he has vey much found his own voice. In the modern file sharing world the internet has spread his music far and wide – a soundcloud rap superstar with the ever fertile East Europe being the first to embrace this dark musical vision.

His music is both horror and terror and full of dynamics and tension and release and it’s stunningly effective.

Anti-icon is a further exploration of this and takes the heart of darkness trip of black metal but deconstructs it into the chopped up world of rap where switching rhythms and textures is key as long as long the deadly downbeat grooves, rock heartbeats and pounding trap beats are there.

Produced and engineered in part by the legendary Ross Robinson and Arthur Rizk, this is a perfect merge between the internet groove of the darkness of black metal and the pounding heartbeat apocalypse of the darkest of raps.

A groundbreaking album – full of cinematic space and a heavy bass line bottom end. The imaginative vocals are full of frustration and claustrophobia switching between high speed raps and the kind of internal terror screech of Rudimentary Peni or whispered menace or poetic dissonance.

Anti-Icon is a benchmark moment.