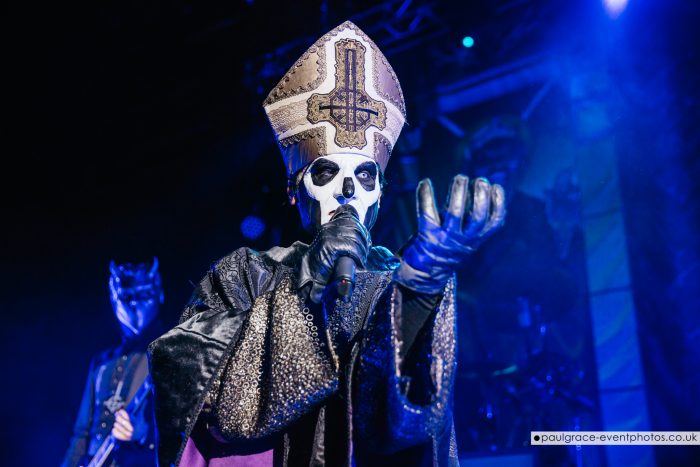 Ghost brought their ghoulish tour to Cardiff and wowed the Welsh with a hell-raising performance. Paul Grace reported for Louder Than War.

Swedish occult pop rockers Ghost are on a winning streak. Over the past few years they’ve won multiple international music awards including a prestigious Grammy for best metal performance. They’re currently on a global tour taking in Europe and stretching as far as South America.

Their bio somewhat intriguingly reads, “Ghost is the name of a devil worshipping ministry, that in order to spread its unholy gospels and, furthermore, trick mankind into believing the end is ultimately a good thing, have decided to use the ever so popular rock music medium as a way to achieve their ends”.

So tonight the Ghost train stops in Cardiff for a sell-out show and as I arrive the queue is long with lots of colourful characters in full Ghost-like outfits and trade-mark make-up.

Warming up are progressive electronic rockers Zombi who, despite being a 2 piece, deliver a massive sound blending deep bass, synth pads, swirling guitars and driving percussion. They create a fascinatingly eerie soundscape reminiscent of The Mars Volta crossed with a John Carpenter horror flick soundtrack.

The theatrics start early for Ghost. There’s a 15 minute intro piece comprised of haunting choral pieces and the air is thick with smoke emanating from incense sticks burning on the stage. Halfway through the intro two of the band members rather dramatically remove a black curtain as a ceremoniously reveal of the group’s instruments. Totally camp!

The Ghost sound is a nostalgic mix of 70’s style classic rock, with huge sing-a-long choruses and hefty doses of religious insinuation. There are echoes of Black Sabbath and Metallica while at other times I can hear music that wouldn’t sound too out of place in a vintage episode of Scooby-Doo. Seriously. 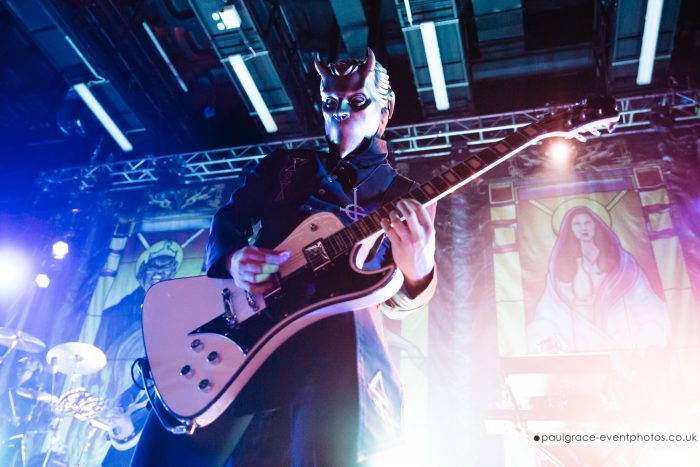 As you would expect, the show is highly theatrical and utterly flamboyant. Between songs Papa Emeritus preaches obscure sermons and at one point introduces us to two nuns. With all this make-up and camp trickery it’s actually hard to know at which level to take this band. Is it all a piss take? Are they devil worshippers and the tour is simply a recruitment drive to join some bizarre occult? But these questions, and more, are the very reason why Ghost are uniquely brilliant. They sit comfortably and successfully somewhere between quality rock musicianship and tongue-in-cheek Spinal Tap style satire; it’s fabulous and fun and definitely not to be taken too seriously. A sentiment that’s clearly also shared by their adoring fans whose persistent screams of support throughout the show are deafening.

Halfway through Papa Emeritus drops the papal robes and a confetti cannon erupts into the crowd, while the highlight of the night comes in the shape of ‘Cirice’ – the very track that won them the Grammy last year.

The 90 minute show ends and we’re left literally begging for more. Dead Can Dance’s ‘Host of Seraphim’ rather appropriately plays through the PA as we file out and the look of complete satisfaction on everyone’s faces is a joy to see. The Ghost show is absolutely like no other – miss them at your peril!