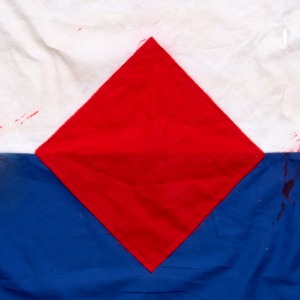 The debut album from Ghost Twins is a slow-build of experimental electonica punctuated by grand pop moments and the punch of melodic hardcore. Sarah Lay takes us through the album.

There is a slight crackle, a slow build before the beats come, cold against the skin. The debut album from Derby-duo Ghost Twins starts with wavering atmospherics before giving you the big drop into the chorus. Yes, this is a band who can do subtle and intricate electronica, pop hooks and brash riffs with equal aplomb.

Breaking Friends, the opening track of Never Fear Total Failure, brings all the parts together and shows off a poetic yet cynical lyricism to boot. “No man can rattle your cage, you move with a lyrical grace, and dance around the wind, a blank look on your face, we don’t even talk now, that’s the way I like it”, comes the refrain before the track disappears to a whisper then insistently begins the build again with drops of bass, rippling toward the distortion of organ.

It’s a heady mix of sounds and styles that could all too easily pull in too many different directions at once. But Ghost Twins keep it under just enough control and send a shiver down your spine as you realise not only is this an exciting album but a band who have made a needed transition from their rock roots.

For while this may be the debut offering under this name Chris Jones and Andrew Foster have been around the musical block, and on Derby’s local scene, as previous incarnation Crushing Blows; an altogether more rock orientated beast.

And some of that hangs over – in the hardcore screams of 2006, guitar further to the front in You Will Always Be Lonely – but in a way that becomes just another influence than something that shapes the sound overall.

Sugar in My Hand nods toward last year’s debut from fellow Derbyshire band Haiku Salut, as a shower of synths become electronic pinpricks of sound. But it quickly moves away into a spin out of other sounds, a hazy vocal. And it’s this which becomes the signature for the album; a step away from the standard verse-chorus-verse and a refusal to stay rooted into one style for each song.

Yellow and Green is sparse and harsh, a machine beat, synths building like the adrenalin as a sinister distant shout of ‘all roads leave to happiness’ juxtaposes with the more soothing vocal and looping lyrics. It’s a slightly uncomfortable listen which is tipped over as the beats machine gun and the bottom drops out into a fearful ‘come over here so I can beat you’ before those insistent whispers about happiness build back in and the track disappears in a bouncing heartbeat.

The first track released from the album, Unknown Animal, is a great introduction to the sound. An electro-pop-hardcore hybrid just as big and catchy as the opener. There’s disco phaser vocal effects, clipped sticks rhythms, a bare almost post-punk first part from which the vocal revs away and the synths begin to howl. It’s an apocalyptically ravaged track that manages to swing at you with a shiny hook.

Into the Sea and closer Fantasyland, in particular, favour squelchy acid beats and spaces filled with tinkling synths and keys, tripping drums. The last minute and a half of the album is a white heat from the ignition of all sounds and styles at once, it is, literally and musically the culmination of all that has come before on Never Fear Total Failure.

Ghost Twins are a band who are still metamorphosing but as their electronic wings unfurl from the rock cocoon the patterns look promising. Give the duo a little space, a little time and what’s already shimmering will become a blinding brilliance.

All words by Sarah Lay. You can read more of her articles from her author profile or follow her on Twitter.