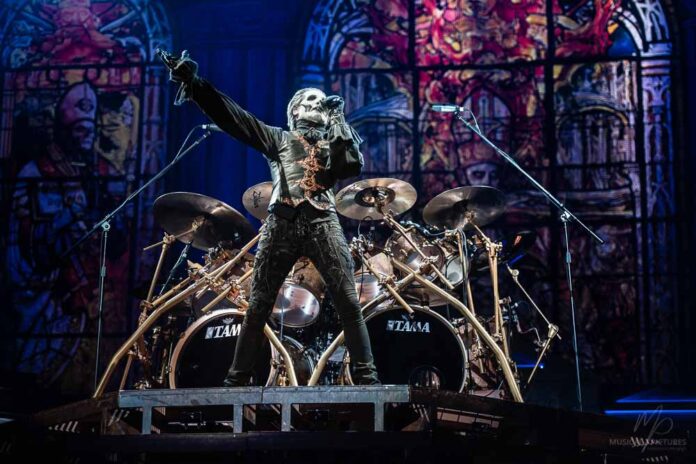 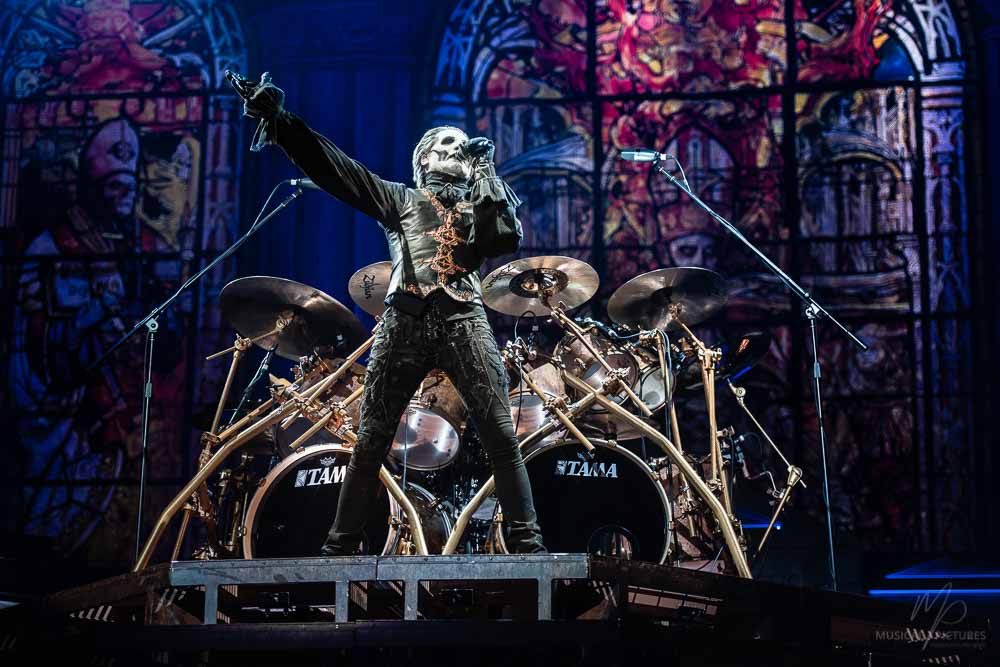 Thrilling, overblown, celebratory, and often quite ridiculous, with clear nods to Alice Cooper and Kiss, Ghost’s show at the O2 in London is everything an arena rock gig should be.

Ghost’s new album, Impera, is partly about the rise of empires. It’s something they know a little about. Just over a decade ago, their debut LP didn’t even trouble the UK charts; their latest debuted at Number Two. On their last visits to London, pre-pandemic, they played at Royal Albert Hall and Wembley Arena; tonight they’re at the city’s largest indoor music venue, The O2.

There are many reasons for that ascent. Their songs, which have always been ridiculously catchy, are becoming ever more so. Their sound, increasingly infused with a Swedish pop sensibility, now openly embraces the melodic rock of ’80s titans like Def Leppard. Their look — all black and white face paint, papal garb, religious imagery, masks — is impossible to ignore and as intriguing as the mythology they’ve created. Their ability to build a loyal community rivals even Iron Maiden; they’re the kind of band whose diehard fans (aka Ghouls or Ghulehs) slap on face paint, and every second punter — from teen girls to middle-aged men — wears an official T-shirt. 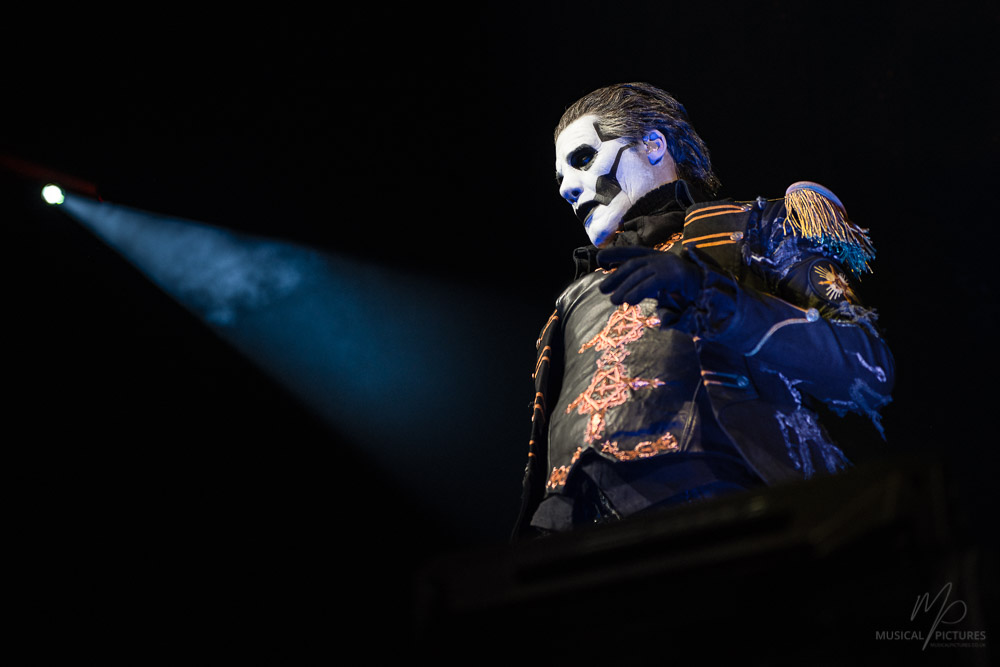 But the biggest reason must be their live show. Thrilling, overblown, celebratory, and often quite ridiculous, with clear nods to Alice Cooper and Kiss, the Imperatour is everything an arena rock gig should be. Of course, there are flames, flash pots, confetti cannons, and one of those sparkler waterfalls. The lights on the titanic rig drench the venue in red during Year Zero, which begins with the choral chant of “Belial, Behemoth, Beelzebub, Asmodeus, Satanas, Lucifer”. Those same lights transform The O2 into a giant disco during the impossibly boppy Dance Macabre. The familiar glow of raised mobile phones accompanies the set’s only power ballad, He Is.

Inevitably, there’s a backdrop of three massive stained glass windows. Obviously, there’s a giant staircase centre stage, topped by a drum kit, and flanked by raised platforms with enough space for at least some of the eight masked musicians (aka Nameless Ghouls). The guitarists — in steampunk gas masks, of course — pose and solo and duel and, during Devil Church, throw in the London Calling riff. In the middle of one of Ghost’s heaviest songs, Mummy Dust, a keytar suddenly pulls focus. And the instrumental Miasma climaxes with a man in complete papal garb (aka Papa Nihil) playing a saxophone like he’s warming up to appear on Glenn Frey’s The Heat Is On. 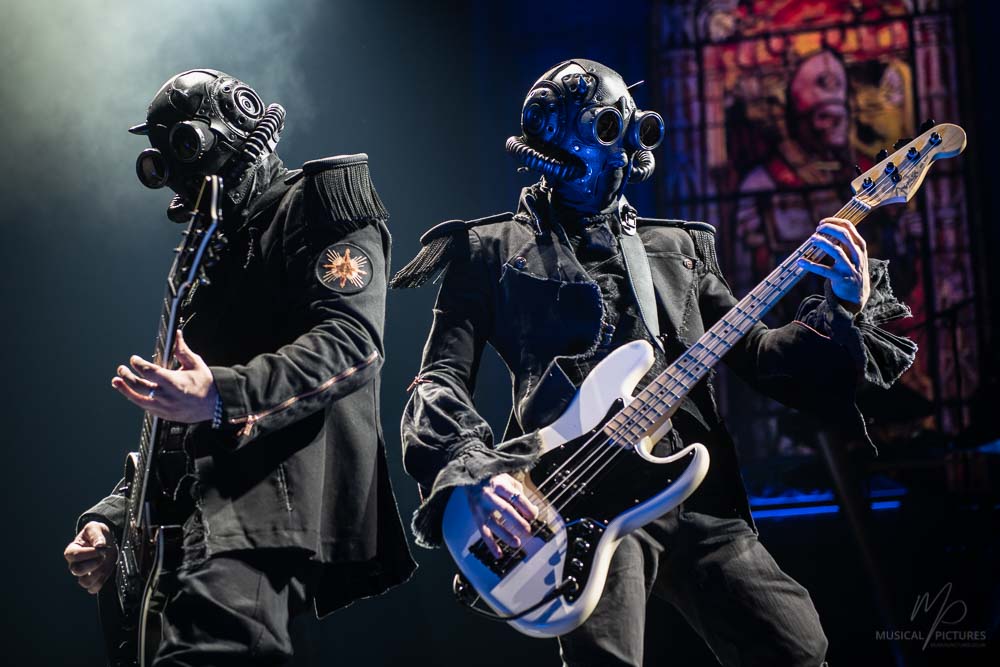 Yet, none of this threatens to upstage Tobias Forge (aka Papa Emeritus IV). All theatrical gestures, he glides across the stage, or up and down those stairs, with his head back, chest out, one arm outstretched. Think Bruce Dickinson, but more flamboyant and better dressed. With costume changes aplenty — and no video screens to capture the outfits’ intricate detail — his ever-changing look can be hard to track. But, at various points, the singer wears an 1800s maritime coat (think Sgt Pepper’s minus the psychedelia), a turquoise sequined jacket, bat wings, and the full pope regalia.

While it must be tempting to stay in character throughout to push the sense of spectacle beyond breaking point, Forge isn’t shy when it comes to interacting with the crowd. There’s the usual “Hello, London” stuff, the “Let’s forget it’s Monday” banter, and the “Thanks for your ongoing support”/”We’d be nothing without you” platitudes. And then there’s the (slightly) unexpected: despite all the throwaway references to hell and sin and the devil in the lyrics, the only marginally frightening thing about the gig is a prolonged chat about the taint (aka perineum). 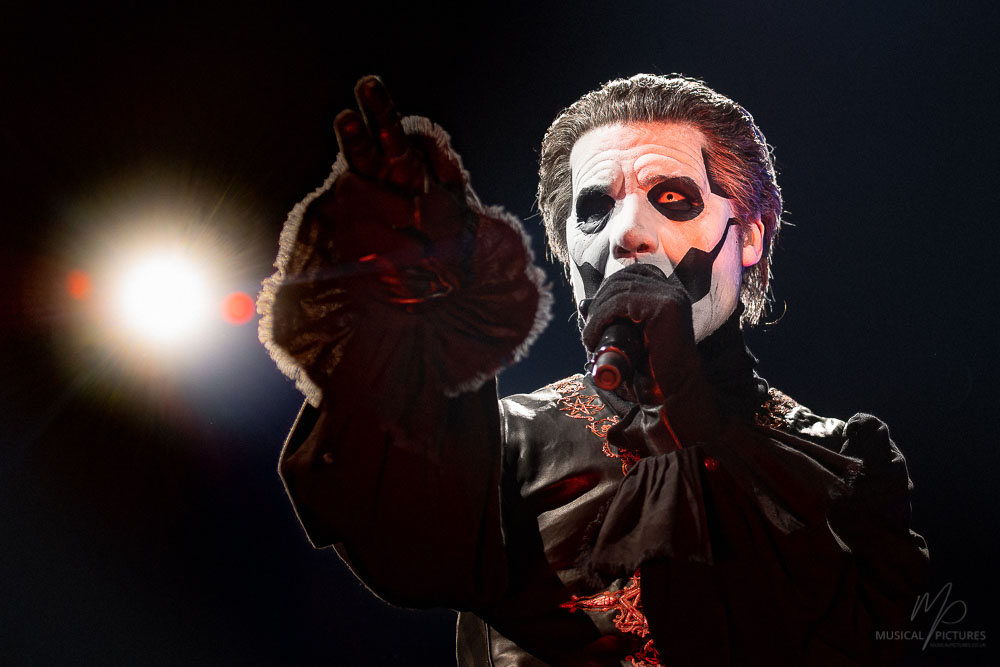 Later he delivers an extended and clearly genuine thank you to the venue staff and to those audience members who’ve overcome lingering Covid fears to come out tonight. It’s a clear reminder that most of all, Forge preaches inclusivity and unity. That’s underlined by the joyous response to one impeccably performed song after another. Even the trio of new songs — the imposing Hunter’s Moon, Impera highlight and future hit Spillways, and the truly regal Call Me Little Sunshine — are welcomed by the faithful with open arms.

Ghost’s new album, Impera, is also partly about the fall of empires. On the basis of tonight’s show — a playful, inspired, uplifting rock opera that musically, lyrically, and emotionally balances light and shade — that’s still a long way off for Ghost.

Words by Nils van der Linden. You can visit his author profile for Louder Than War here. Find him on Twitter and his website.

Photos by Simon Reed. His website Musical Pictures is here and you can visit his author profile for Louder Than War here. He tweets as @musicalpix.