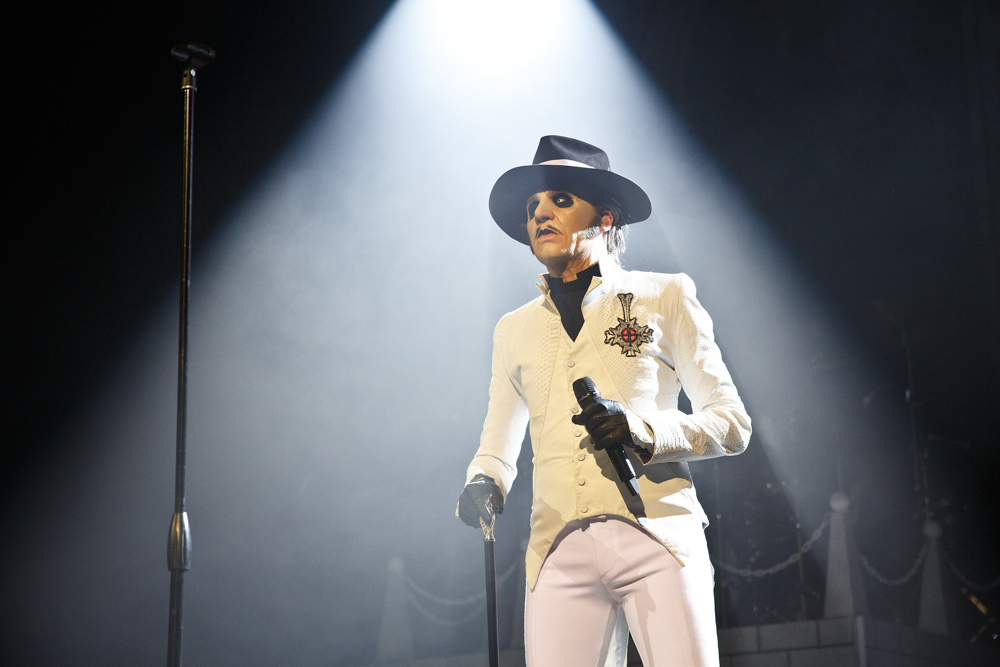 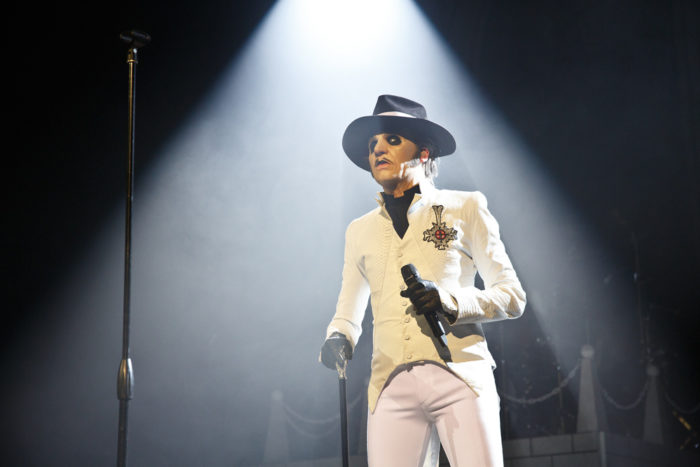 Ghost took over London’s Royal Albert Hall in an unholy manner with Cardinal Copia overseeing the dark proceedings. A good thing Louder Than War’s Andy Duke was on hand to witness the ritual.

You could say that Sweden and myself have a bit of history together. Prior to making my way to Royal Albert Hall in my battered Volvo estate car, I decided to bash out some chords on my vintage Gothenburg-made Levin guitar while perched on a utilitarian IKEA settee. This was followed by reading Facebook messages from my Swedish godson, Ådrian. Yes, I’ve an affinity with all things Sverige and have had the pleasure to travel in the land of the midnight sun from the Arctic Circle down to Malmö and back again many times over. But what does this have to do with Ghost and their unholy takeover of the iconic venue The Beatles rudely referenced in A Day In The Life? Everything.

Ghost’s strengths, brilliance and quirkiness are a very Swedish thing and have parallels with their home country’s weather. The way that the seemingly never ending daylight of summer clashes with cold winters that are all too friendly with the dark – it’s very much like the band’s music and ethos. They are masters at getting disparate musical qualities and sensibilities to merge into something unique and perfectly formed. There’s the yin of intensity to the yang of fun and it’s all delivered with Scandinavian tightness and a decidedly catchy top line. This six-member outfit bring a similarly juxtaposed dynamic to their live show. On the surface, the elaborate church-themed stage wouldn’t have been out of place on ‘The Gospel According to Spinal Tap’ tour had the champions of ‘going to eleven’ been an actual band. It’s all beautifully over the top and my reference to Britain’s loudest band isn’t an attempt to do Ghost’s stage design a disservice. Far from it. The stone cathedral set with blackened voids and faux stained glass windows would not be out of place at the Royal Opera House with more neutral artwork in situ. It’s equal parts elegant, imposing and captivating. Which are, coincidentally, qualities that frontman Tobias Forge (and his revolving alter egos) possesses in spades. I recall seeing a documentary in which Judas Priest’s Rob Halford discussed his pre-show ritual. He would scan his leather-clad body in a full length mirror and say “I’m a Metal God and I’m going to work” before screaming for vengeance in front of an arena crowd. Forge, however, is a more refined prospect live. He oozes the cool and deceptive calm of a young Peter Cushing at his Hammer Horror best rather than your stereotypical hard rockin’ frontman. Whether in his various Papa Emeritus guises on previous tours or as Cardinal Copia in this year’s outing – he sachays rather than runs. And commands the crowd with subtlety rather than shouting. This is indeed a ritual rather than a gig. And a two part affair at that. 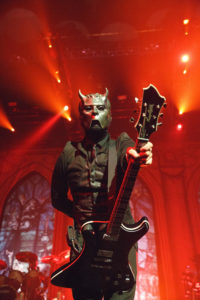 Act 1 kicks off with the epic intro to Ashes. It’s an almighty sound with three guitars, bass, drums and lashings of keyboards filling every crevice of the sold out venue. The band of nameless ghouls are all sporting chrome masks and draped in black. The pomp and circumstance of the instrumental opening number sets the scene beautifully for the highly dramatic entrance of Forge as Cardinal Copia. Looking resplendent in black tails, his arrival is met with the enthusiasm of a papal visit before 5000+ passionate followers. The congregation of fans are lapping it up. This is theatre. And it’s entertaining as fuck. “Are you ready to rock?”, asks the Cardinal just prior to the band kicking off Rats from this year’s Prequelle album. And, judging from the enthusiastic delivery of each and every one of the track’s ‘Ah Aah Aaaaaah’ parts by the crowd, it’s safe to say that rock preparedness is at a high level by all those present. Changing the theme from rodents to religion, Absolution makes its presence known amidst onstage pyrotechnics and a loud “I want to hear you really scream” prompt from the Cardinal. It works. As the fret frottaging reaches its climax in the guitar solo, the head of the clergy asks “are you with us?” for the first of many times during this evening’s performance. With the stage becoming engulfed in dry ice and pink light, Ritual, from 2010’s Opus Eponymous album, inspires a mass clap-a-thon until the frenetic double kick drum infused middle-eight takes over. The audience’s reaction to the track illustrates the band’s wide appeal. The hard rock loving fraternity rejoice at the heaviness with fist punches aplenty while the contagiously catchy hooks mobilise those who are driven more by melody than metal. In a unique way, the tongue-in-cheek drama of it all unifies these factions into an almighty holy order of Ghost fans. And they’re a passionate bunch.

An impressive guitar interlude paves the way for the re-emergence of Forge, this time dressed as a priest, with a single-chain thurible in hand, wafting incense with each swinging motion to the beat of Con Clavi Con Dio. Not since Madonna incorporated a thurible in her live rendition of Oh Father in the early 1990s has this Catholic tradition been so, for a want of a better word, ‘cool’. Having had speed metal songs going through my head when attending Catholic services as a kid, mostly due to  a combination of boredom and hyperactivity, this part of the show resonated with me in a good way. As did the Pete Townshend-esque windmills from one of the ghoulish guitarists while the track segued into Per Aspera ad Inferi. 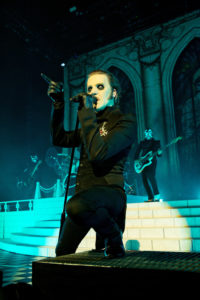 The band’s unique combination of brilliant musicianship and dry humour is showcased to great effect on Devil Chuch. On the surface, this is a classic ‘Baroque & Roll’ offering with an organ sound that would give Bach a stiffy and neo-classical guitar motifs that Yngwie Malmsteen would happily pull his Ferrari to the side of the road to listen to. But, it’s delivered with lightheartedness and a lot of inter-band finger pointing. Just when it feels like it could all be getting a bit too serious and ‘muso’, one of the ghoulish guitarists pumps out the opening guitar intro to Deep Purple’s Smoke On The Water as a humorous aside to laughs galore. With the Cardinal returning to the stage, Cirice (from 2015’s Meliora album) provides a singalong-friendly respite to the impressive musical muscle that was displayed earlier alongside Stand By Him. With Miasma (from 2018’s Prequelle album), there’s a return to a display of instrumental prowess but this time with the humorous addition of Papa Nihil on saxophone. Although I’m not entirely sure if the sax was actually being played live by this other alter ego of Forge’s, it’s an hilarious prospect to take in. Seeing a man looking older than time itself and dressed in papal regalia while playing a solo that Clarence Clemons would be proud of isn’t something one witnesses every day. With the acoustic version of Jigolo Har Megiddo (from 2013’s Infestissumam album), the Cardinal provides rhythmic instruction to the audience on how to clap to a shuffle; “just put your hands together on the two and four”. And it works shufflingly (it IS a word – now) well. Ghost finish their ‘first act’ with Pro Memoria and Deus in Absentia with the former featuring thousands of smartphone torches being brandished across the venue. 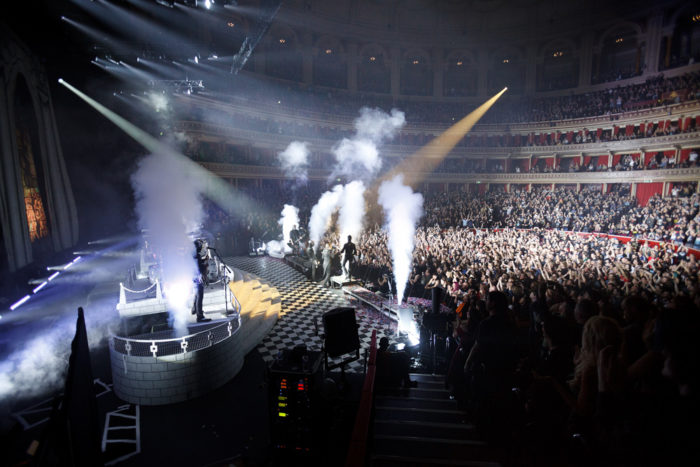 Following an intermission, the ritual continues. “25 Minutes? They’ll all come back drunk or needing a wee”, exclaims the Cardinal as he welcomes back the congregation. The staccato intro to Spirit (from 2015’s Meliora album) kicks off Ghost’s second act in earnest and displays the group’s progressive rock influences but not at the expense of the melody or taste. This is followed by the bass-heavy From The Pinnacle To The Pit (also from Meliora) which is enhanced by massive ‘boom’ explosions on stage. There’s no let-up in intensity with Faith, off the recently released Prequelle, featuring the spoken “faith is mine” lyric being uttered in perfect unison between crowd and Cardinal. Beelzebub gets namechecked and Satan hailed in Year Zero (from 2013’s Infestissumam album). A slight departure from the dark fodder that preceded it, the acoustically charged He Is (off the Meliora album) illustrates Ghost’s remarkable skills at delivering anthemic material with great finesse live. The majesty of this lush offering is counterbalanced by the stabbing attack of Prime Mover (from Opus Eponymous) which recalls early Metallica right down to the percussionist ghoul’s use of a white Tama drum kit. The set’s dynamics continue to display every increasing variety with Mummy Dust, If You Have Ghosts and Dance Macabre. The Cardinal and his band of ghouls close their second act, and the gig, with Square Hammer (from 2016’s Popestar album). It’s a big song to close a decidedly big gig and wouldn’t be out of place in Alice Cooper’s cannon of hits.

Tonight’s performance featured drum, guitar and ‘keytar’ solos, costume changes and explosive pyrotechnics alongside religious and demonic references. Most of these elements should be relegated to the overwrought category when employed in metal music. Ghost, in their very special Swedish manner, manage to avoid being corny or overly derivative when employing these tired ingredients by balancing them with a sense of fun and theatricality.

Ghost return for one encore with the Cardinal introducing each and every ghoul, and ghoulette, in great detail. He then describes their final song for the evening, Monstrance Clock (from 2013’s Infestissumam album) as “being about the act of the female orgasm”. And, with everyone singing “come together, together as one”, tonight’s two-part ritual reaches its own beautiful climax. Complete with confetti being shot over the audience from two large cannons. I’m glad I came.