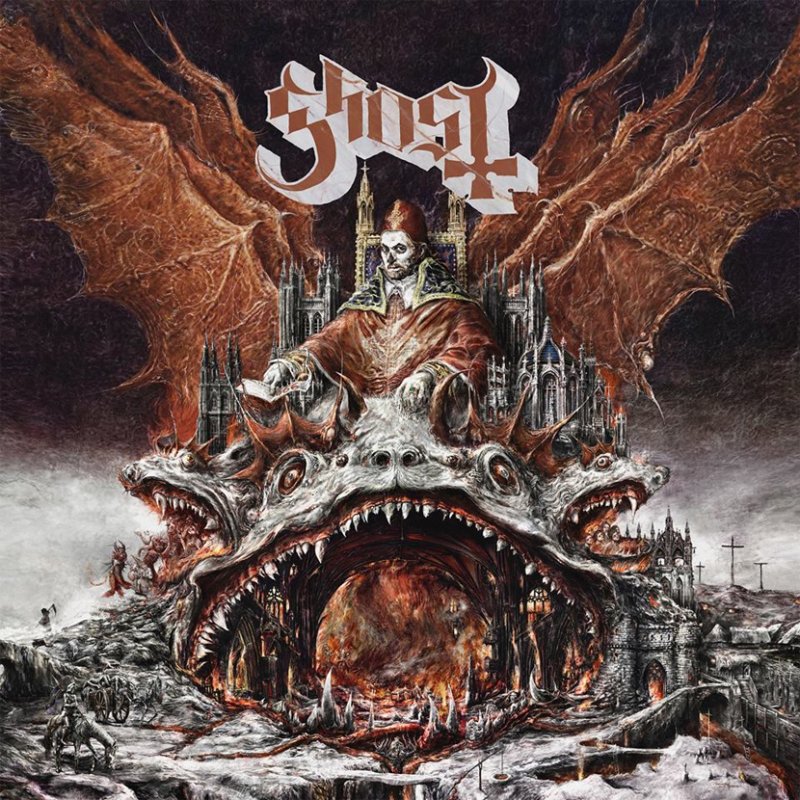 The news that Papa Emeritus III is no more and The Cardinal (Cardinal Copia to be precise, although we all know now it’s Tobias Forge) has stepped up to front Ghost gives way to their fourth album, sorry, sacred psalm, Prequelle. One that covers death, devils and departures from the norm.

It’s a record that finds them maintaining some stability with the familiar Ghost sound and lines of enquiry while dipping into new and previously uncharted waters. Not necessarily repeating the formula that resulted in the huge success of Meloria album, Popestar EP and the Grammy winning Cirese track, the Godzilla marching stomp of Faith (bet you find yourself almost singing that you’re feeling a presence amongst us – unless you’re one of those who hears “in the presence of monsters” in Cirice) follows an intro into ‘Rats’ that’s designed pure and simple as a concert opener. Welcome back my friends…

Naturally the themes of death and the devil forges a plentiful thread that runs through the veins of Prequelle, the blows often tempered by the soft white underbelly of Blue Oyster Cult-ness and to be frank, it’s not scary on the Sabbath level; listen with the lights off in relative safety. Put your feet up with a glass of tomato juice and pretend you’re drinking blood.

A little fun comes with a few moments of ambiguity in the lyrics…”I wanna be wi’ch you in the moonlight” felt almost cringeworthy in the Euro disco flavoured Dance Macabre until someone pointed out “bewitch you” (doh!) and then there’s the “don’t you forget about dying, don’t you forget about your friend death, don’t you forget that you will die” optimistic little thought that emerges from the vast string symphony that opens Pro Memoria. The favourite may be the “Every day that you feed me with hate (although I’ afraid I can’t get beyond hearing ‘meat’?) I grow stronger” line. It just won’t go away. Perhaps the point in the live show when the sisters of sin distribute raw liver to the front rows…?

Things take a left fork as Miasma follows an instrumental path that includes a prog-tastic shedload of twiddling synthesiser and an ‘I wasn’t expecting that’ rasping sax solo. Helvetensfonster feels like quite some departure, conveying an English pastoral ambience albeit with storm clouds in the distance and a hint of ominous danger that thankfully blows over in the second part of the piece where the ghost of Mike Oldfield floats by.

Prequelle will ultimately take its place as an album that in places does what is expected, in places is very bold and in places doesn’t quite come off but at least Ghost are questioning the wisdom of standing still.

You can watch Rats here: