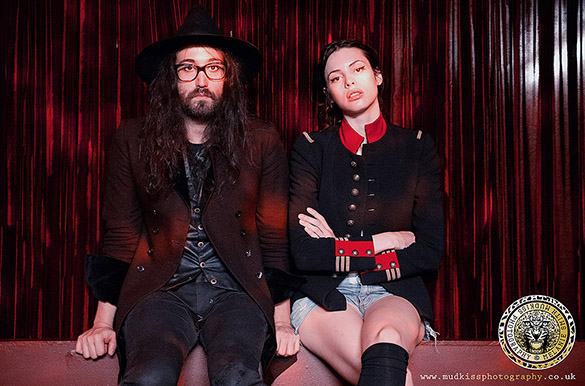 Ghost Of A Saber Tooth Tiger

Excellent in depth interview with Sean Lennon and Charlotte here

This is some experience.

Looking like some kind of gang of strange droogs from middle earth, The Ghost Of Saber Tooth Tiger are like all the best drugs made into music.

When you watch them play you enter their world as they create a swirling and rhythmic beauty that sounds like the great Syd Barrett (and posy Syd Floyd when they were still in the shadow of his genius with Rick Wright keys and those great minor key chord changes) jamming with Can and a whole pile of battered and loved 1965 to 1975 crackling vinyl thrown into the swirlybird mix- there is even the wonk of classic Happy Mondays in there somewhere and all those lovers of the gonzoid groove. The band are referencing and making intio their own a pile of records where gems of weirdness are treasured and inspiration can be found in the car boot sale of spaced out oddities from the underground but slipped into the dangerous 21st century and into a new time of tripped out music. 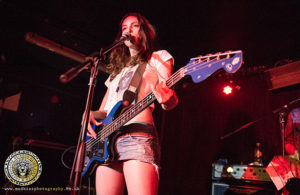 Oozing a brilliant soupy psychedelia, Ghost Of A Saber Tooth Tiger are far, far better than they have to be. With their history and background they could get away with anything but have chosen to immerse themselves in an underground of tripped out creativity and are one of the most fascinating and cutting edge ‘delic bands in these tripped out times. Tonight they delved into their current Midnight Sun album that saw their kooky beauty explored much deeper with lush melodies and a brilliant and warm and emotional freakiness that is captivating and glowing.

Lets get the history stuff out the way early- singer and guitar player, Sean lennon, is, of course, the son of Yoko Ono and John Lennon whilst his partner in creativity and in real life is model Charlotte Kemp Muhl. They should be the spoilt brat children of the revolution but are humble and creative powerhouses whose music is a swirl of rare beauty that messes with your mind with its gentle ebbs and flows and inner beauty that transcends its roots and really takes off.

The pair of them have built a tight band around them that delivers those slipping and sliding off kilter time changes and eerie spooked weirdness that makes for the most perfect psychedelic music as your mind floats away with its stunning beauty and execution.

The most fascinating thing in the context of their heritage is that the greatest psychedelic band of them all (for me) , late sixties Beatles, are not referenced anywhere in their music with saint Syd being their mentor and the eternal beauty of Kraut rock gems like Harmonia being a far bigger part of their trips DNA.

Sean has a gentle guru like stage presence- he does funny between song patter and oozes a self depreciating yet charismatic personnae. He may look like his father in his bearded up 1969 tail end of the fabs period but his demeanour is very much his own. He is a great guitar player who colours his playing with strange effects and wonderful licks and fills the strange and wonderful world of his songs with an emotional beauty. Charlotte may drip model perfection but she is also a damn fine bass player who is content to stand to the side of the stage and is an equal creative partner in this project and their vocals slip and slide together.

This is far more than pastiche, the song writing is brilliant and the music drips with the eternal glow of the possibilities of the trip. Their enthusiasm is infectious and their vision is as wonderful and kooky as you would ever want. This was like tripping with acid and a wonderful, glowing, warm world of oozing wonkiness that worked on so many levels.