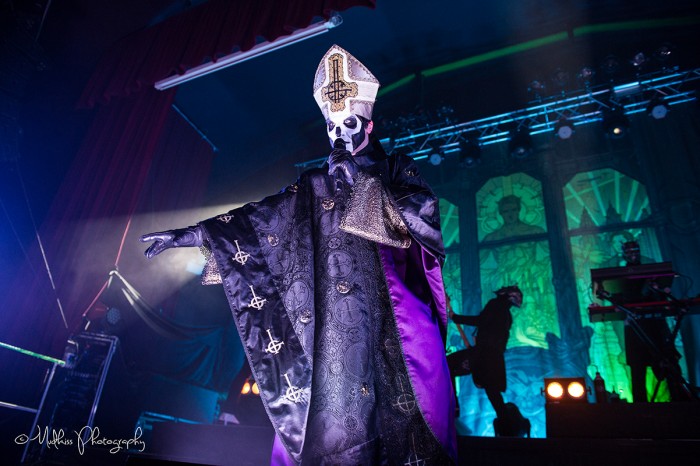 Swedish metallers Ghost are fast becoming a phenomenon. They released their third album, ‘Meliora’ back in August to great acclaim, hitting the road on the massive ‘Black To The Future’ World Tour, selling out venues across America and Europe with their demonic rock opera antics. Like a mix of Slipknot meets ABBA, Ghost have managed to created something incredibly accessible; Sing along choruses and chunky metal riffs sit side by side, packaged with their eye-catching imagery, Ghost have tapped into an inverted universe where a skull faced Pope leads a group of demons to entertain and subvert our souls.

Turning up early to tonight’s show at the ever abysmal O2 Academy, officially the worst venue in Bristol because if you aren’t in one of the few vantage points to watch the band, your shit out of luck. Well, they have now upped their shitness with the addition of large metal detectors you must walk through, emptying pockets into tray just like an airport. All in the name of safety of course. (most probably due to the Paris terrorist attack on the Bachalan music venue) Utterly useless, except to acclimatise us to the presence of such idiotic ‘solutions’ to match the idiots that police them and us now.

Support act, Lost Soul aren’t much to talk about except that their two young guitarists, drum machine and older seasoned singer bored the shit out of me with their lame nu-goth rock. Since I wanted to get a good spot for Ghost in the main pit area, they were my burden to bare for what felt like an eternity.

Ghost, on the other hand know how to put on a great show, having been touring the new album for the last four months, and their set is as tight and dynamic as sets get. A massive depiction of the Cathedral album cover backdrop over-looks the stage, with incense burning on the left and right. Over the PA, Gregorio Allegri’s ‘Miserere mei, Deus’ and Jocelyn Pook’s ‘Masked Ball’ plays as the lights dim and Ghost’s nameless demon musicians take their places. The appearance of vocalist, Papa Emeritus III get the crowd cheering in unison as the band break into album opener, ‘Spirit’. The faithless sing the chorus back to band, arms aloft, punching the horns of the devil into the air. “Spirit. Absent.” 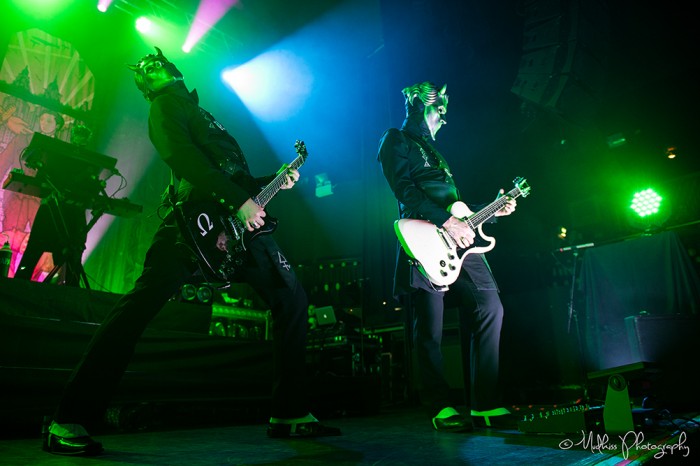 The new songs are incredibly effective, none more so than, ‘From The Pinnacle To The Pit’ with it’s fantastically dirty, distorted bassline than opens the track. The nameless demons stalk the stage and pose, as the skull-faced Papa Emeritus III works the crowd decked out in his personalised robes and mitre. He waves his thurible during, ‘Ritual’, anointing the front rows with the sweet smell, taking all the Catholic imagery and props, and turning them on their head. It’s a prog rock opera worthy of Jim Steinman and Meatloaf. Direct and accessible, with it’s tongue firmly planted in it’s cheek. Older songs such as, ‘Per Aspera Ad Inferi’, ‘Year Zero’ and Blood And Body’ off their 2013 album, ‘Infestissumam’ are strewn among the mostly new material like the supremely catchy, ‘He Is’, ‘Absolution’ and ‘Mummy Dust’.

Locally enlisted girls in nuns habits are brought on stage during, ‘Blood And Body’ handing out an offering of communion wafers to the front row. “Do you drink blood Bristol?” Papa asks. Sacrilegiously, the heretic masses seem fine with it. Scarily, it seems that under the command of Papa, the crowd would, given the chance. Damnation awaits methinks. Of course, all the theatrics are played to maximum effect during the hour long set and it’s all lapped up feverishly by everyone. Their cover of Roky Erickson’s ‘If You Have Ghosts’ ends the set, with an encore of, ‘Monstrance Clock’ following to end the evenings satanic sermon, with the congregation present leave utterly possessed by the spirit of the unholy Ghost.

All photos taken @ The Ritz, Manchester by Melanie Smith – Mudkiss Photography. More work by Mel on Louder Than War can be found at her author’s archive. You can find her on Facebook and Twitter. Photography portfolio can be found here: mudkissphotography.co.uk.