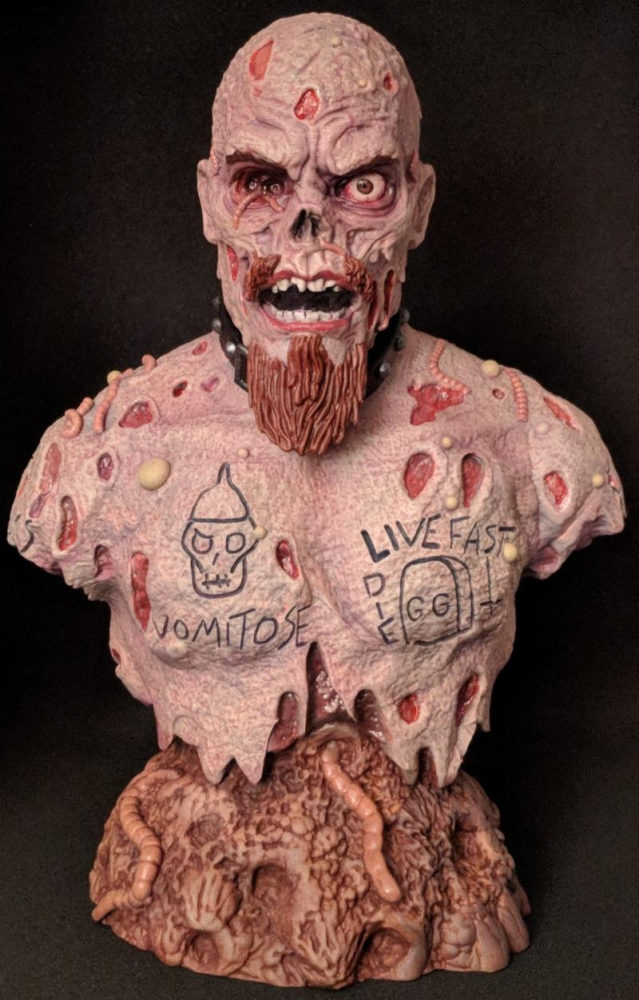 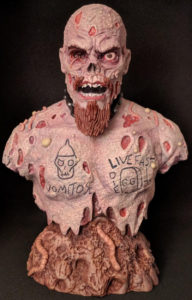 This special edition bust depicting a zombie-like GG Allin post-death is the first of its kind by Aggronautix, the company behind the infamous Throbbleheads – the range that includes the likes of Jello Biafra, Devo, Capt Sensible (LTW News), Lemmy and The Stooges.

THe GG Allin is based on a illustration by Lou Rusconi, sculpted by Arlen Pellitier, and detailed by Eddie Bradley, this figure is it is hand-painted and limited to just 1000 numbered units.

Standing at seven inches tall and made of high quality resin, this bust of GG is sure to give you bad dreams and torment all those who come in contact with it!

First 100 pre-orders receive an exclusive “Live Fast Die” enamel pin! Priced at $64.95 inc P&P (USA only) Orders from outside the UK will be required to pay additional postage charges.

Kevin Michael “GG” Allin (August 29, 1956 – June 28, 1993) performed and recorded with many groups during his career, the best remembered being The Murder Junkies who released the self titled album via New Rose Records in 1991 however Allin is best recalled for his outlandish live performances, which often included self-mutilation, coprophagia, and assaults on his limited audience, for which he was arrested and jailed on multiple occasions. 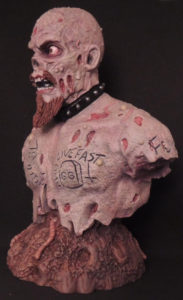 His lyrics, which often expressed themes of misogyny, paedophilia, blasphemy and racism, polarized listeners and created stark opinions of him within the punk community. When questioned about his music and shows, Allin regularly replied that he was trying to make rock music “dangerous” again.

Allin promised for many years that he would commit suicide on stage during one of his concerts, he on occasion had local Police Officers in the audience to prevent such an action – instead he died of a heroin overdose on June 28, 1993 following a chaotic gig the previous night in Manhatten. THe venue owner cut the power during the second song, Allin responded by stripping naked, trashing the venue then walking the streets of Manhatten covered in his own faeces for an hour, followed by a group of the gig goers, before arriving at a friends address where Allin took huge ammounts of heroin passed out and was later found dead.