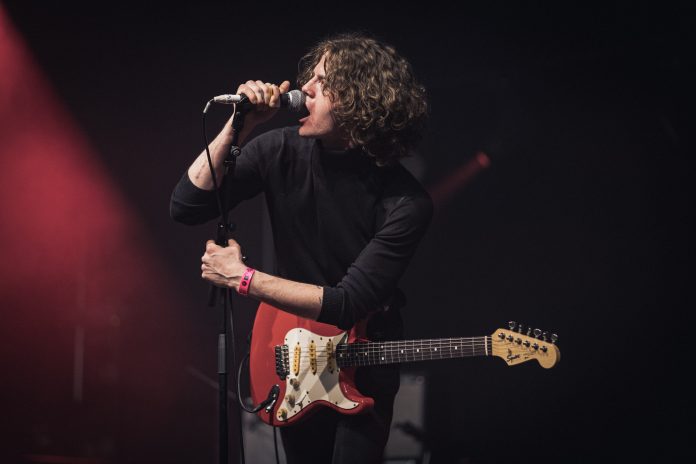 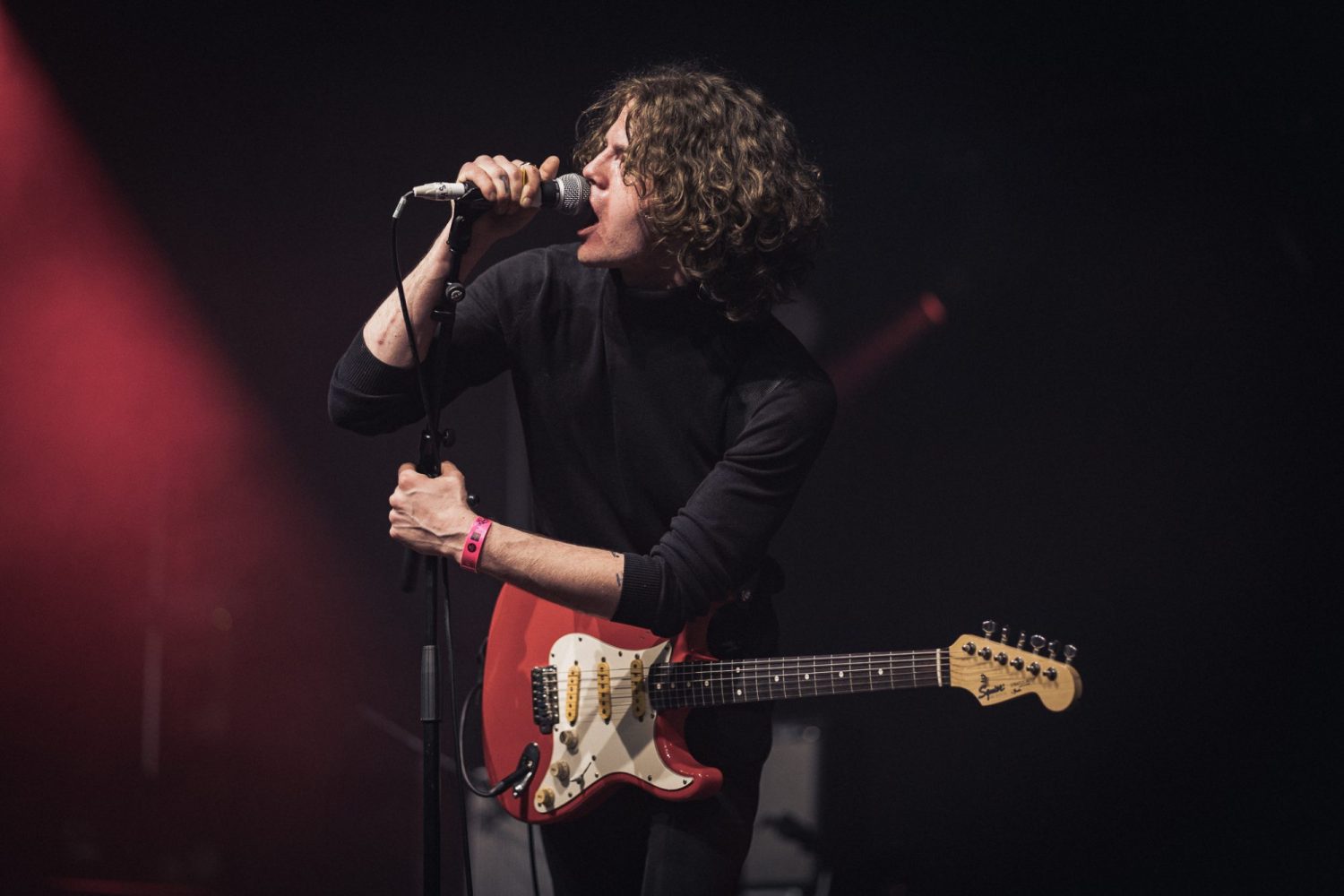 Get Together Festival
Students Union, Sheffield
1st May 2022

Still only in its second year, Futuresound’s independent festival Get Together has been warmly embraced by the Steel City with an eclectic mix of bands at six stages scattered across the Sheffield University area, the Octagon, The Foundry, BeaverTown Stage, Somewhere Stage, Firth Hall and Under the Bridge, all within about five minutes walk of each other.

As word spreads it’s looking like a safe bet to become a permanent fixture on the Sheffield music scene with 2023 already in the pipeline. As with every Metropolitan style festival, it’s a pick your own, all you can eat, moveable feast, with a race of discovery to be in the right audience at the right time. You might be missing greatness on another stage, yet can’t quash your curiosity to find out if a brand new band can capture your imagination. 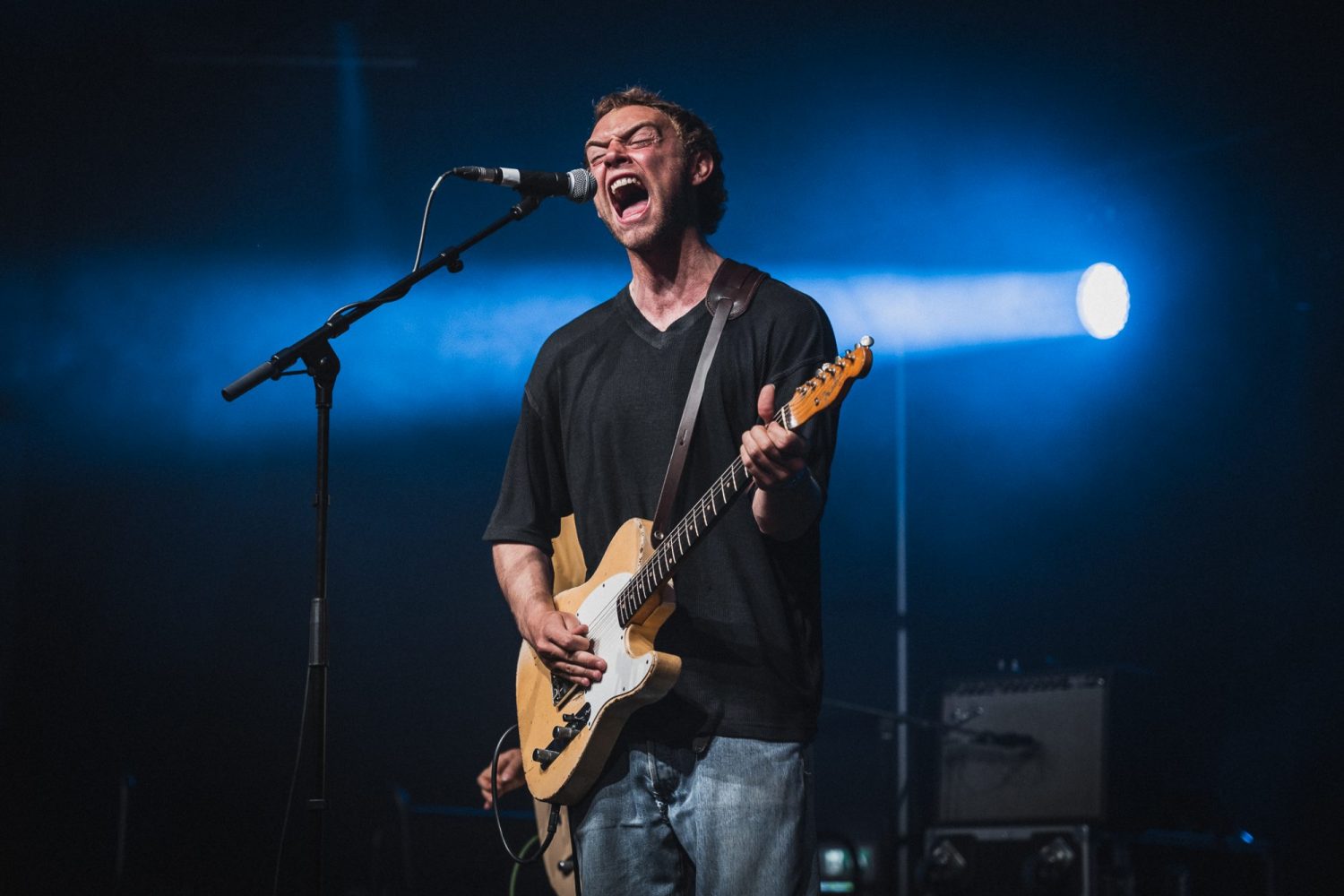 The first band that caught my ear was the four piece Wunderhorse who played a tightly-honed set of alternative rock over at The Octagon. Fronted by Jacob Slater, formerly of The Dead Pretties, the creative guitar playing had shades of Radiohead’s Jonny Greenwood circa 1990s, back when he was having fun with his distortion pedals. The energy built from song to song until the last tune saw them whack the gain up on their amps as their choruses leaped out from jangly indie verses to a fuzzier muscular climactic outro. 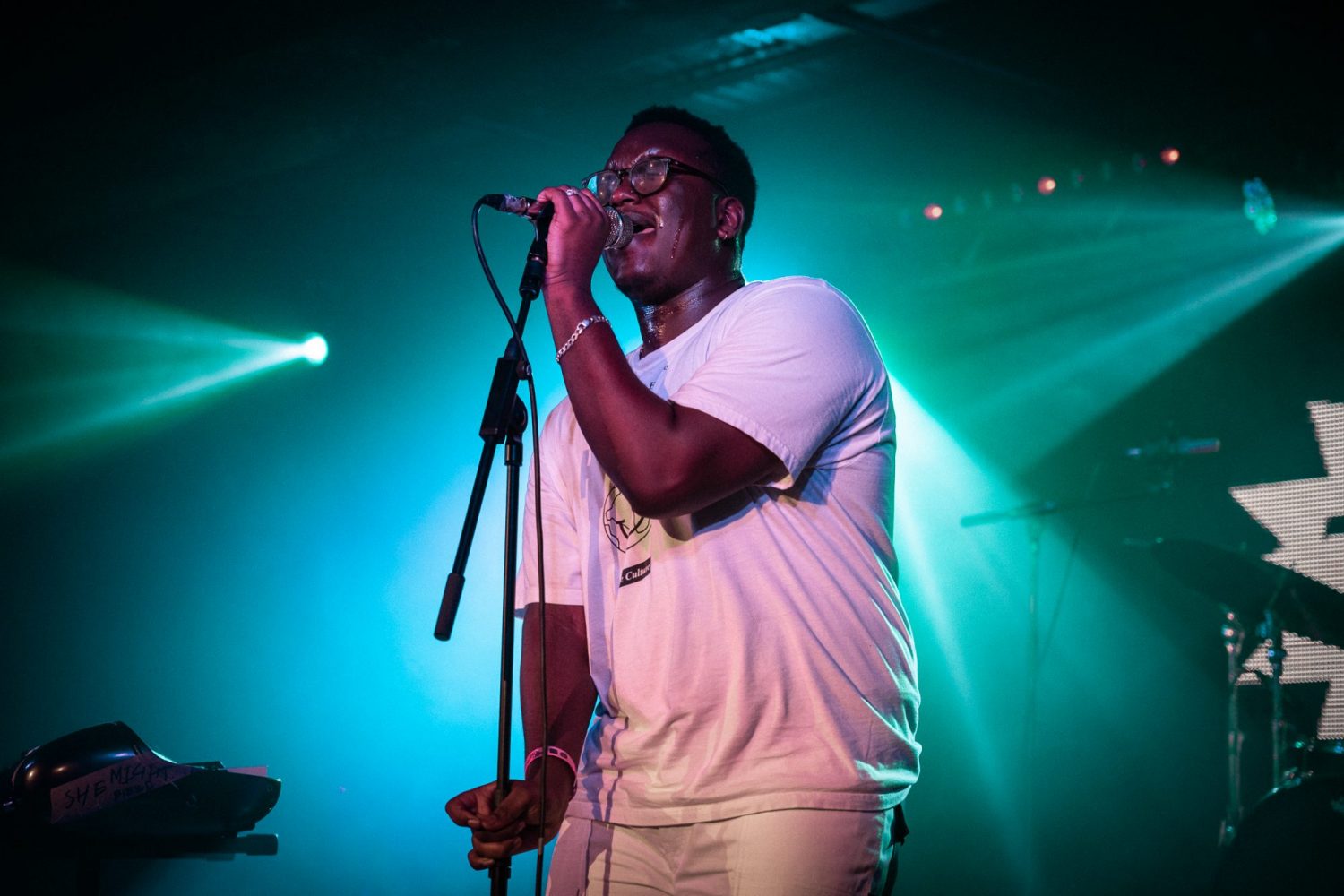 I knew I had a day of post-punk stacked up ahead of me, so it was a nice change of pace to catch Sipho, a soulful boundary pushing artist from Birmingham. With a fantastic front man in Sipho Ndhlovu, the band’s sound veered from RnB, gospel and jazz to indie pop, all guided by Sipho’s incredibly powerful yet emotive vocals. 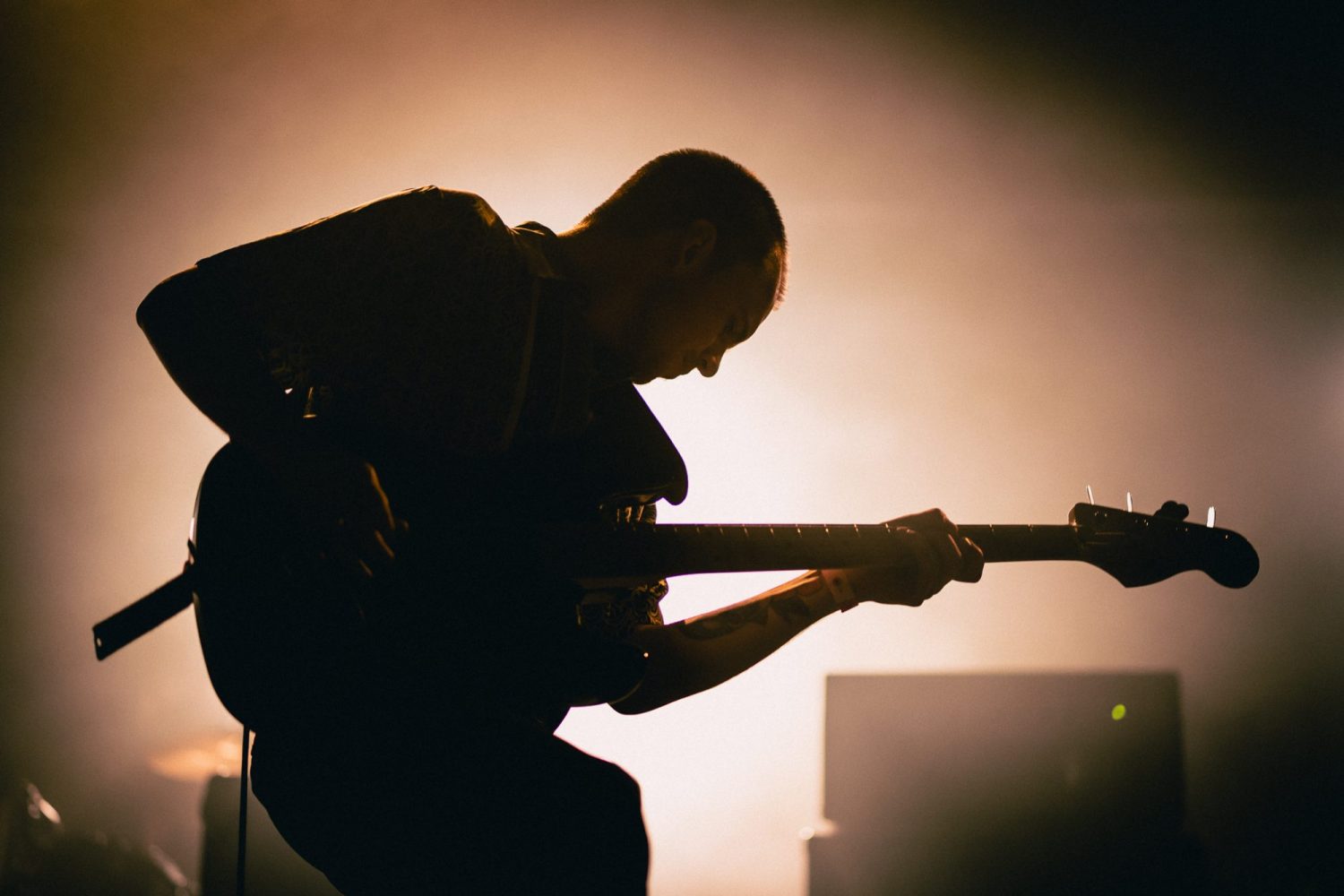 Ushering in the early afternoon was one of the bands I was most excited to see, The Blinders. Hailing from nearby Doncaster, they undoubtedly drew a strong Sheffield following as they packed out the cavernous Octagon stage. Their set was a wild sprint through 45 minutes of recklessly thrilling psychedelic punk rock. Spiky Orwellian lyrics were spat out over dark psychedelic grooves, with songs like Black Glass guiding singer Thomas Haywood into resembling a Yorkshire Nick Cave. The band showcased tracks from their first two albums Columbia and Fantasies Of A Stay At Home Psychopath, but also plenty of newer songs. In contrast to some of their earlier material, the optimistic energy of the recent single Fight For It,  is a ray of indie sunlight peering through often angst-ridden clouds. As the final note of the last song was struck, the band joyfully hurled their instruments across the stage, fired some scrunched up setlists up through the air, into the hands of eager fans and departed the stage to a huge applause. 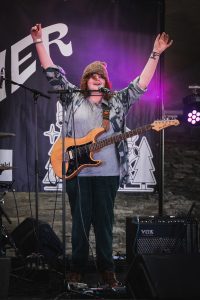 Racing back to Under The Bridge, a free-entry stage hosting some of Sheffield’s unsigned heros, in time to catch Harri Larkin a Sheffield based three-piece, named after and fronted by Harri herself, as they breezed skillfully through a genre-melting set of catchy indie tunes layered over tight funk grooves tied together by Harri’s fantastic vocals. The band’s infectious enthusiasm and catchy tunes swelled the crowd with each song, as passersby were drawn by Harri’s indie pop tractor-beam and found themselves settling in for the whole set.

A brand new local band, Work In TV, was up next. Though this might have been their debut gig, the Sheffield five-piece were clearly experienced musicians. The set was tight and the songs were catchy and well crafted. They had a danceable, Talking Heads-style indie vibe. Songs about starting and ending the year in bed, will no doubt resonate in the ears of all those whose lockdowns weren’t that productive, despite the internet’s best efforts at guilt-tripping everyone into thinking they should have been. The original songs were going down a treat but a brilliant guitar-led cover of The Pet Shop Boy’s West End Girls was an unexpected surprise which got a great reaction from the expanding crowd under the bridge. 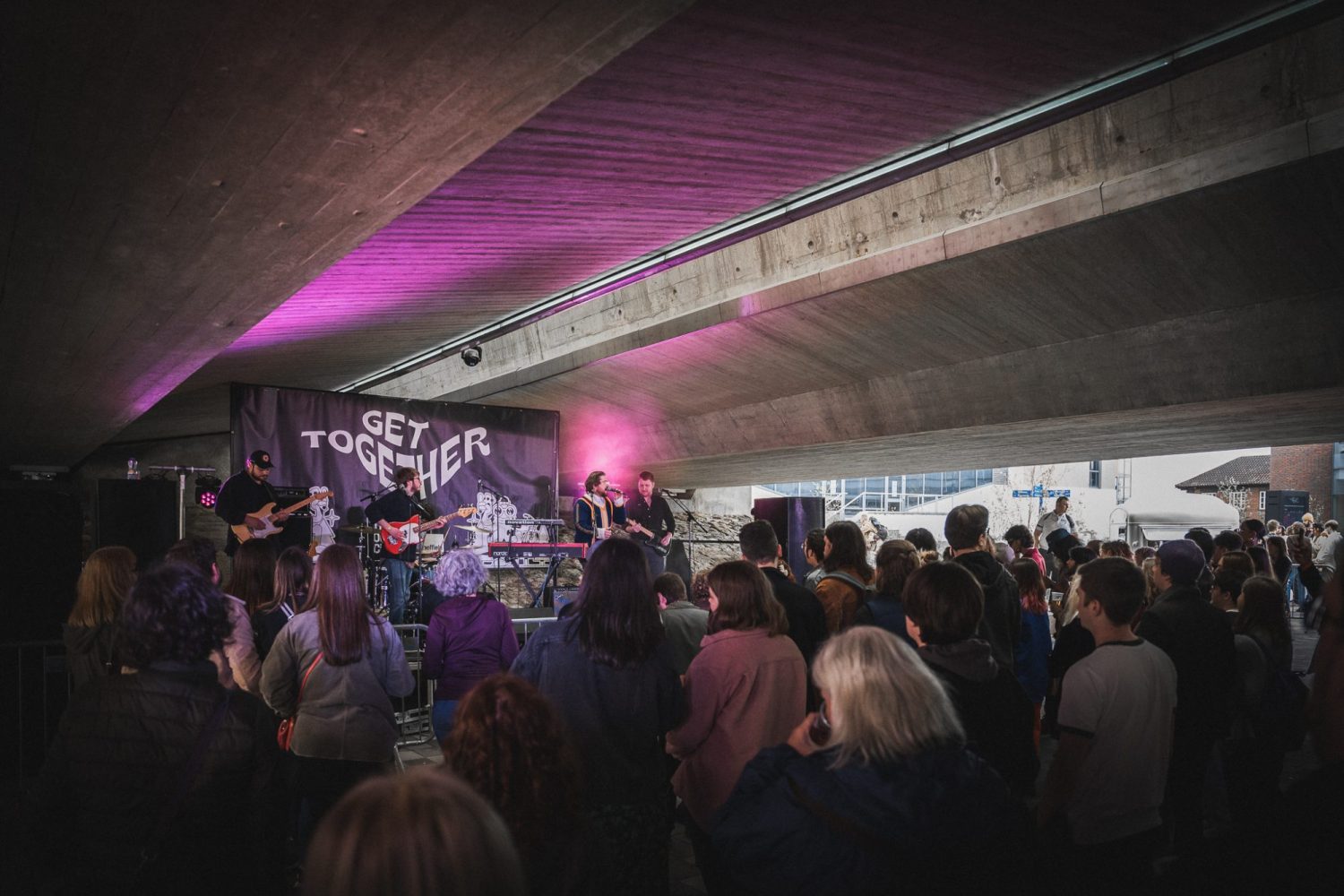 Rushing over to The Foundry stage at Sheffield’s Students’ Union to catch Irish band NewDad, a 4-piece from Galway, who played a minimalist set of ethereal alternative lo-fi indie. The significance of the packed-out room wasn’t lost on NewDad as they gratefully thanked the people of Sheffield, and rewarded them with an hour of dreamy jangling guitars reminiscent of Pixies and The Cure, rounded off with Julie Dawson’s softly sung vocals to complete their set of brooding and atmospheric indie pop. NewDad will be back in the UK for the All Points East festival this summer. 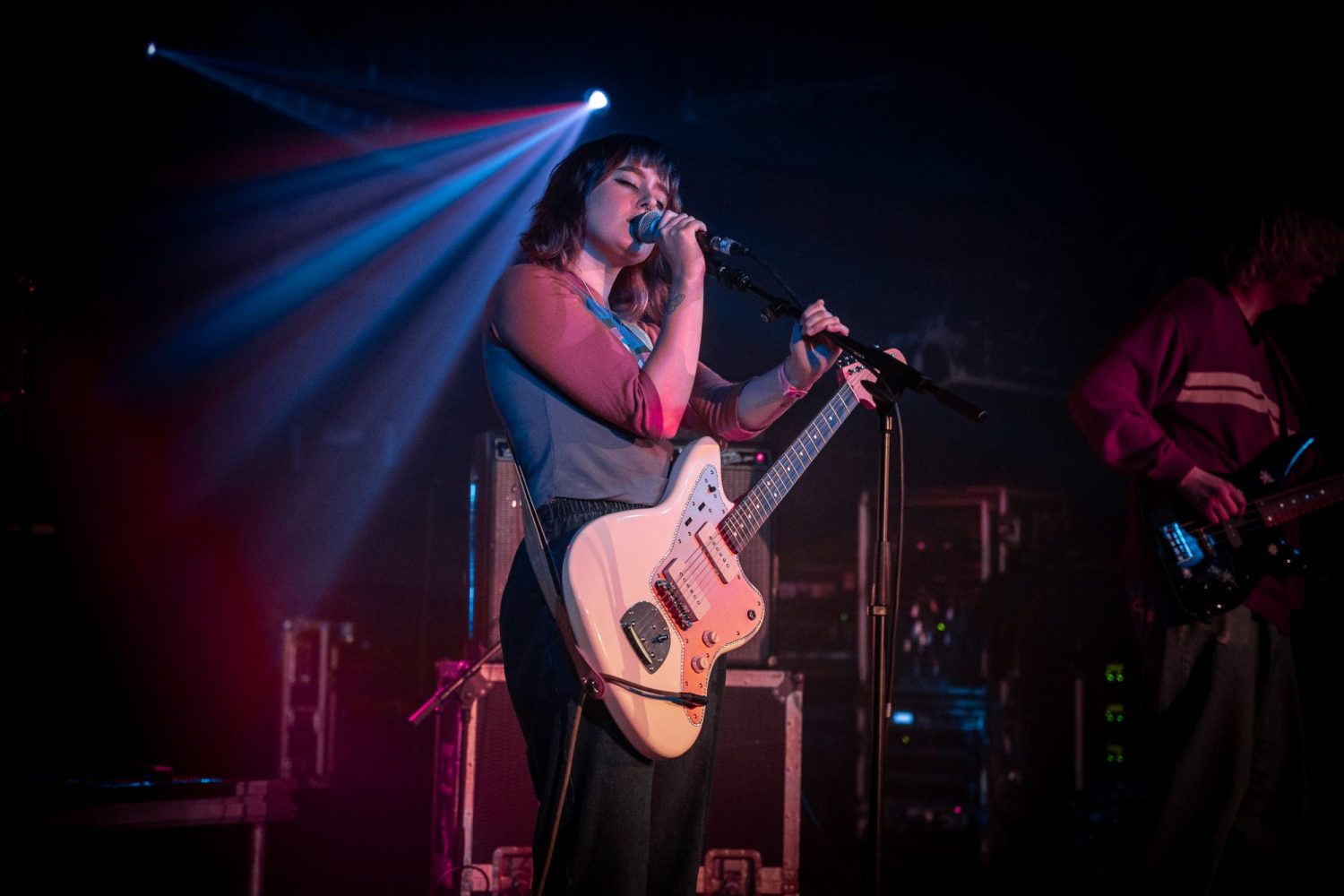 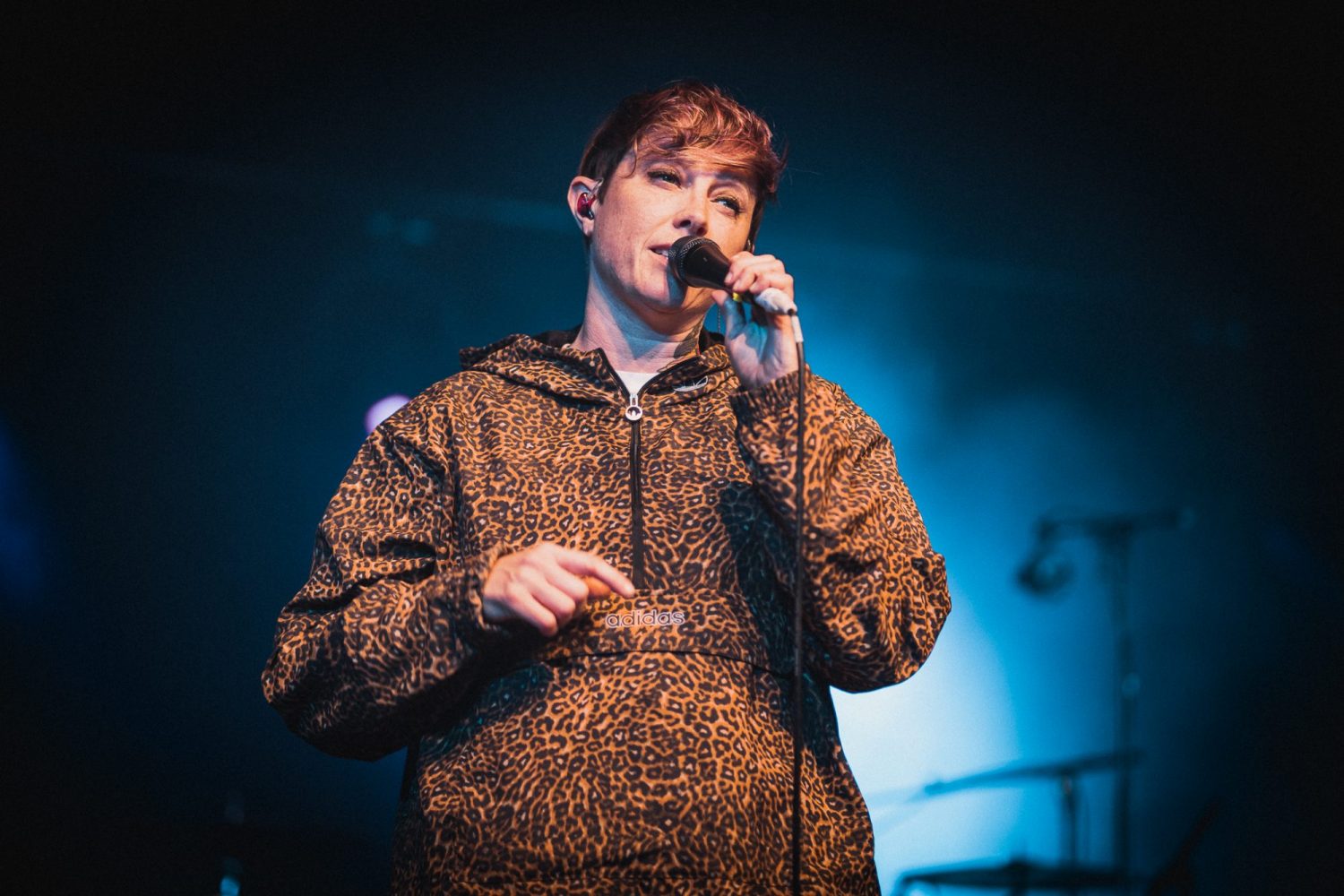 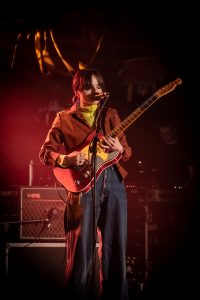 The next band on my list was She Drew The Gun over on The Octagon stage. Keeping things simple the Wirral band, known for their politically-charged psych pop, ran through the first couple of tracks in a very cool and laid back manner. Eventually singer Louisa Roach upped the ante by dropping her guitar, which gave her the freedom to really work the stage. She mentioned that they had recorded their album in Sheffield, which gave the crowd an incentive to show extra support, perfectly timed for the band’s next song, the ’60s-tinged banger, Something For The Pain which got a big response from the crowd.

Goat Girl, a four-piece gang of post-punks from South London, followed with richly layered vocal harmonies over synthesized hooks and a nonchalant attitude.

The Octagon’s final act for the evening was Squid, a progressive and experimental sounding post-punk band that had drawn a huge crowd. Squid’s marching rhythms were mixed with jazzy instrumentations of synthesizers and cowbells, serving up an exciting unpredictability in their song structures and arrangements. Tucked away within each song were all kinds of breakdowns and build ups ready to blindside you with an intense 15 seconds of noise just as you were acclimatising to the verse. 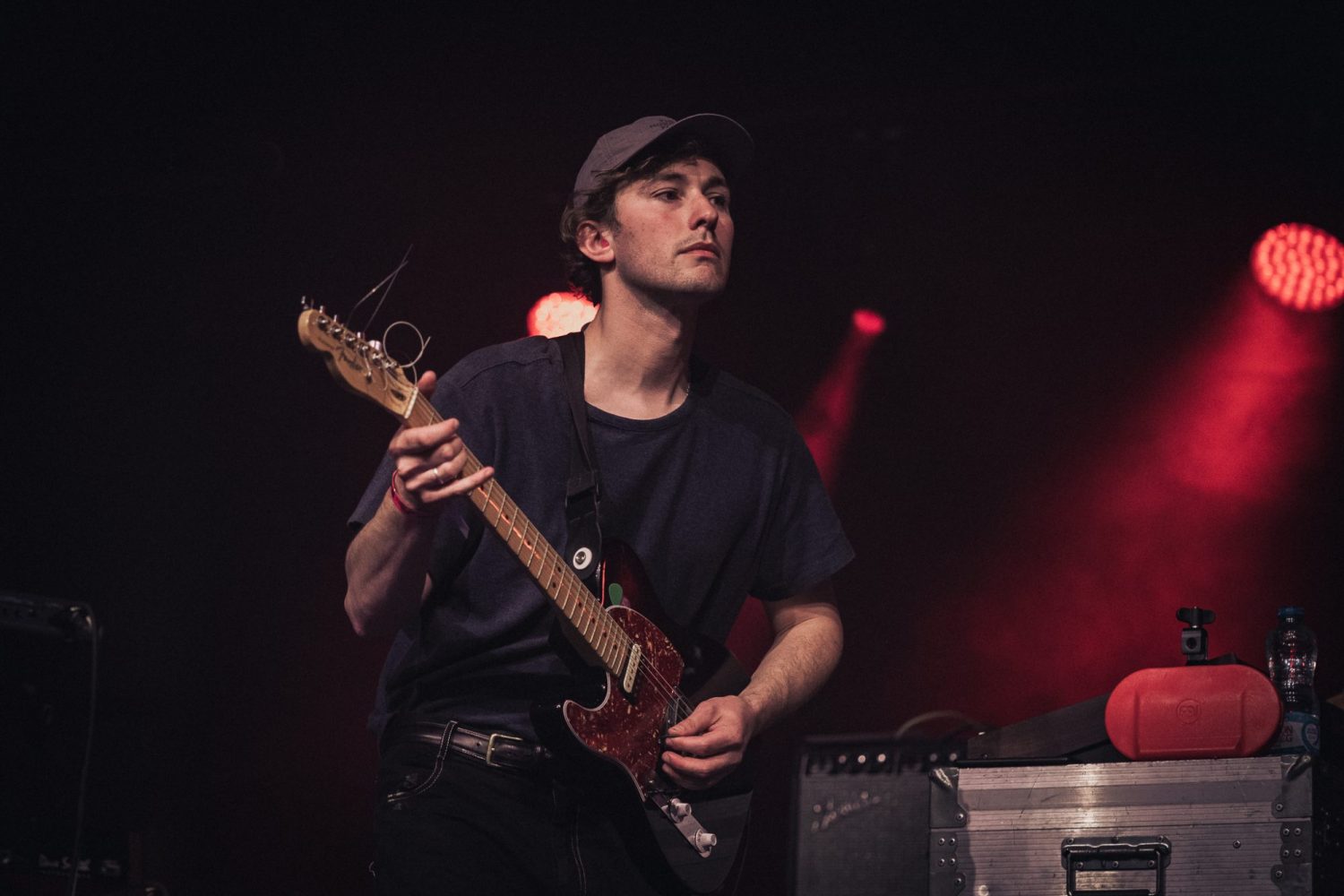 By 10pm the Get Together Festival audience had descended in force on The Foundry for the evening’s final act, an Australian electro dance duo, Confidence Man. For those squeezing in from other venues, the idea of getting anywhere near the front was an impossible dream. The band are currently on a European tour which includes supporting Noel Gallagher, and dropping in for a set at Glastonbury Festival, before heading back to Australia.

Their set featured ludicrous, but brilliant, costume designs and choreographed dance moves that generated an overwhelming sense of fun. The packed-out room immediately jumped along to the pulsating electronic dance pop as Confidence Man closed Get Together 2022 with a sense of joyful revelry.