Home News Get SpizzEnergi to xmas number one! watch the video from the punk... 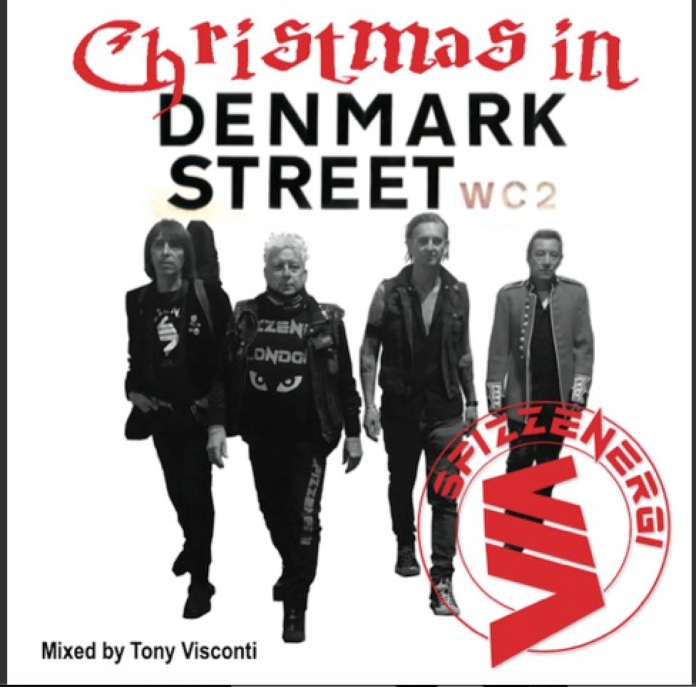 TONY VISCONTI and SPIZZENERGI join the battle to save the soul of Denmark Street with festive ‘Christmas in Denmark Street’ single.

A poignant anthem to the fading London that is being replaced by the money and concrete that crushes culture out of the streets, the song is about Denmark St and full of the community of xmas. The plan is is to go for the xmas number – another institution that we have lost over the years.

The download is available to pre-order after midnight on Thursday from this link https://orcd.co/dom1xex

Christmas In Denmark Street was penned as a lament for the cultural and musical landscape of London, as developers moved in to trash one of the city’s most famous musical corners in the name of Crossrail.  Mixed by Tony Visconti, the track has a feel of nostalgic warmth that echoes the golden age of Christmas singles, but its lyrics are as barbed as you’d expect from the punk veterans and have taken on an extra dimension of meaning in light of the government’s decision to abandon the performing arts and night time economy during the Covid pandemic.

The song was written by Spizz and guitarist LucaComencini five years ago, after a gig at the legendary 12 Bar Club in London’s Denmark Street.  The venue, which closed that week, played host to names as illustrious as Jeff Buckley, Adele and The Libertines on their way up greasy pole of rock ‘n’ roll. It’s a spirited paean to the eroded night-time community while the bells of Soho and Saint Giles ring out.  Even more pertinent now, as campaigners battle to gain Denmark Street – once the centre of the city’s music industry – protected status and stop it from being eradicated by new developments .  The campaign to save the street’s unique and historic character is one that many top musicians, including members of The Who, The Kinksand Soft Cell, and MPs including Keir Starmer, have already publicly voiced their support for.

SPIZZENERGI first rose to critical acclaim in 1980 as the first music act to top the newly created UK Indie Chartwith the renowned single Where’s Captain Kirk?More than two decades later it was included inMojo magazine’s list of the best punk rock singles of all time.  They formed in the late 1970s and as well as changing line-up, they have also changed name many times over the years – previous names have included Athletico Spizz 80, Spizzoil andThe Spizzles.

Producer Tony Visconti says: ‘I liked the song a lot when I first heard it. As I have lived in London for 22 years, the sentiments of the song, and hope that the street could be saved, struck a chord in my heart. Spizz is a great performer and his vocals made it very appealing to me. I’m so happy with the way it turned out. It’s commercial enough to be played on the BBC and I hope it gets lots of signatures on a petition to save the street for all our efforts.”

Spizz says: ‘The chorus for Christmas In DenmarkStreet came to me on a cycle home on the 10th January 2015. This was the final week of the 12 Bar Club’s existence in Denmark Street – closing down to make way for the controversial Crossrail project – and coincided with my birthday week. The atmosphere in the club was fantastic and I went every night. The 12 Barwas like a musicians’ social club with bands dropping in after playing at other venues in the area.”