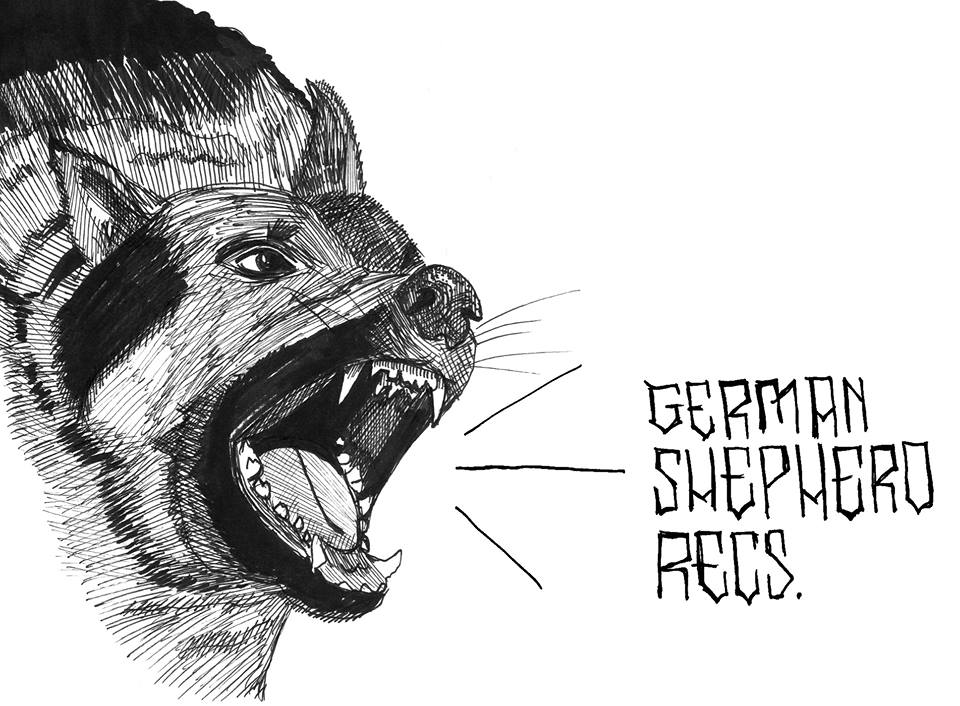 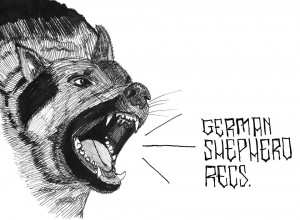 Ged Babey profiles the record label, which John Peel would have absolutely loved, and picks his favourite songs from its roster.

We used to have Peel to guide us through the thousands of new releases by bedroom mavericks on shoestring labels. BBC 6Music tries to fill his shoes but their output is increasingly playlisted and predictable (with a few exceptions like Cerys Matthews and Marc Riley) which is why they and we need to check out labels like German Shepherd.

Now, I’m not a really a full time fan of the avant garde, the experimental, ambient and bleepy electronica … I need a hook or a connection to pull me in. Also, so-called experimental music can be relentlessly dour and difficult.  German Shepherd is different somehow in that its artistes are not wilfully uncommercial, it’s just that they have eccentricities and idiosyncrasies which make them outside the norm (or the mainstream) somehow. Yet they are all united by their inventiveness, the strength of their songwriting and a caustic sense of humour.  The lo-fidelity is purely down to lack of budget and it’s definitely not all electronics  – there are plenty of guitars so you get social commentary and playful pretentiousness and surrealism wrapped up in good tunes and memorable lyrics and it gives the label a unique, old fashioned identity.

German Shepherd Records is run by Ian ‘Moet’ Moss, currently singer with Kill Pretty and fellow music fanatic and blogger Bob Osborne. The label is described on their website as “Greater Manchester-based record label releasing a broad range of eclectic new music, historical artefacts and other associated material”. Meaning roughly half of the stuff they release comes from Moet’s archives from his time fronting The Hamsters (the Manc post punks,  not the Southend bunch), Sicknurse and his current incarnation as KP2 (a more electronic-based mutant disco version of Kill Pretty) in collaboration with various friends.

The Hamsters were once signed to Mark E Smith’s Cog Sinsiter label and Moss is such a local legend there is a great biography of his life which takes in his attendance at the Pistols’ Manchester gigs at the Lesser Free Trade Hall, his time as a mate of Mick Hucknall, his various bands and journey of self-discovery from alcohol and drug-fuelled trouble-magnet to his emergence from the closet at the grand old age of 40…It’s a great story about a bloke with a heart of gold and a lot of creative talent and ideas.

Two of German Shepherd’s releases are vintage stuff from 1981 by Twisted Hand, featuring The Fall’s Dragnet-era drummer Mike MJ Leigh (now playing with Kill Pretty) and his post-The Fall work.  It’s very of-its-time but they seem to have been an intense Joy Division-influenced band who could be seen as proto-Gothic. Post punk archivists and completists will appreciate the two Twisted Hand EPs (one on vinyl, a few copies left).

Partly due to costs, German Shepherd sticks to downloads but also so that they can release as much music as quickly as possible.  A fair number of the releases are “pay what you like”, so everyone wins.

Listening to the label’s output it took a while for me to fall for its bizarre charms but after comparing it to a day listening to the radio I realised that the world of German Shepherd is a great place to lose yourself in, and I became hooked…. primarily because it has such an old school feel ; its like listening to Peel in 1979/80 and taping off all the weirds-beards and post punk oddballs from regional compilations like Vaultage from Brighton, Fried Egg from Bristol, Object from Manchester and so on.

I asked Ian about the label and its philosophy…

It’s very much 50/50 between me and Bob. The label’s philosophy ‘to take music from the margins and give it a chance to be heard’.  And its not just Manchester bands, we’ve got acts from rock n roll hot beds like Colwyn Bay, Birmingham and Colchester. I like ” avant gardeners” {as a descriptive for the rosta} that’s great!

The music generally reminds me of 1979/80 era Peel stuff – Hybrid Kids, all the Vaultage 78 (79, 80) Brighton compilation albums (and their regional equivalents) with weirdos, bedroom bands doing experimental stuff; their interpretation of the punk ‘anything goes’ ethos….. is GS basically a home for those people, teenagers in 1979, 25 years on?  Or are there younger people involved?

I understand what you’re saying, in those days it was like there was still a punk attitude but people not weren’t constricted by formula, age is no consideration  – there will be a range of ages, races, genders – anything goes as long as there’s a feeling of creative honesty, we’ve turned down material from bands who are fine in a way but just a little too obvious in their style.

The KP2 collaburations are cool in that they seem very instant; have-an-idea, do it, record it, release it – no faffing about with production, endless overdubs etc.  Is that how it works?

Yeah there’s that industrial attitude, strip away the layers of bullshit and pretentiousness, the KP2 stuff quite often is written one day, a vocal recorded against a drum track recorded the next day and the musician asked to finish the tracks off to a two week deadline.

KP2 make me think of a Salford-based Throbbing Gristle with a side order of Edward Lear, PIL and Cooper-Clarke.  They may have attention grabbing titles like ‘Justin Beiber Must Die’ but there is a lot of depth to their songs and a little bit of politics. ‘When the River Rises’ (a collaboration with Loop Aznavour) is about this year’s floods. Whilst the West Country was left to get on with it, once it hit the Thames Valley things were different;

One of the most striking names on the roster are The Prick Jaggers, who can only be described as a Northern surrealist answer to the TV Personalities circa-Part Time Punks. Their piece de resistance is called ‘Lou Reeds Supper Club which has “two kinds of vegtables and gravy” but then “they drug you and sell you to the Navy”.

The Stepbrothers‘ ‘Switched at Birth’ album, recorded in 1993, deserves a full review of its own and features former members of The Mekons, Marc Riley’s Creepers and Mr Moss and is dedicated to founder member the late John Gill described as “a cheerful and gentle studio technician of the highest order affiliated to The Mekons” This is my favourite track.

‘This Ain’t London’  by West Coast Sick Line is the one song which stands out as being an absolute 24 carat classic. A Number 1  single in a parallel universe and completely out of character with their other songs it’s a plaintive, sad little tune in which the narrator slags off a prick from that their London for his attitude.  It’s got some great lines in the lyrics;  “Treat me as I treat you, with disdain but respect /  Is this how you talk to your friends? / I couldn’t live in your, your wrapped up, loveless world.”  Just have a listen, below.  Their two albums are a weird combination of prog, singer-songwriter pop from Devo to The Beatles via 80s kitsch and bedroom punk ( yeah, really, they are hard to pigeon hole) and their best songs include Literacy Gnome and Have You Ever Been To the North?

Of the other artists on the label Johann Kloos seems to have been making music for decades – from a neat line in pastoral psych to ambient piano-based material.

Passage of Time  are described as “improvised experimental percussive/ambient pieces constructed using Ableton Live utilising the new Dark Synth plug-in, together with a few elevator music constructions held over from other projects” but are nowhere near as shit as that sounds!  They actually sound like a rawer Apollo 440.

Modal Roberts  is more mutant disco weirdness, who has his own website showcasing various art projects. I would particularly recommend his alt-karaoke where he sings Neville Chamberlain’s Declaration of War to a Rod Stewart tune.

Oh and there’s much much more, like a new Hamsters compilation and a cool sounding chanteuse who uses “a free-flowing ‘stream-of-conciousness’ approach to composing” called Rose Niland who sounds amazing, a bit like a young 21st Century Nico. An EP by Lachenalia which on first hearing is a bit like the Durrutti Column.

When Peel played something a bit out there or unusual, stuff that didn’t have the immediacy of other musics he’d say, in a chin-strokey way, “Interesting, I’m sure you’ll agree…” which became something of a  catchphrase (like Music Loving Johnny Plee.  Wrong Speed… In the scale of human suffering…).  German Shepherd has some odd music in its archives as well as some fantastic tunes, but it’s all … “Interesting, I’m sure you’ll agree…”

Everyone needs a bit of German Shepherd in their life… a good old fashioned but thoroughly modern indie-pendent label full of artists who straddle the fine line between genius and madness.