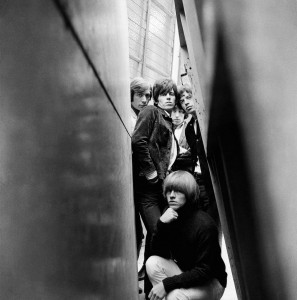 number 2 : Rolling Stones ‘Out Of Our Heads’

Gered : ‘My first cover for the band and at 18 my passport to a career in music photography.’

LTW : This Rolling Stones shot from 1965 was used as the cover of their Out Of Our Heads album Between the Buttons and captures the band at their modish cool just before their regency dandy period. It’s perfectly framed shot with the steel on either side of the photo giving the band a futurity look- like a gang of bowl headed droogs staring into the fire and fast forwarding away from England’s stuffy past.

The personality of each member of the band bleeds from the shot- Keef looks sneeringly cocky, Mick is doing his smirking sex bit whilst the other two are shoved to the side and at the front of the shot Brian Jones looks like perfection with nota  hair out of place on his Mr. Shampoo hair.