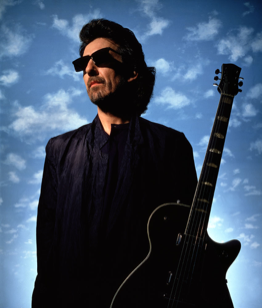 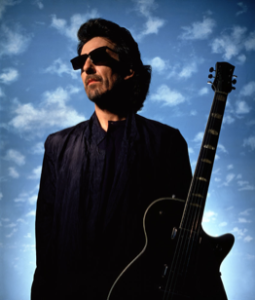 LTW : George snapped on his great final comeback fro the Cloud Nine album presents him in a man in black cool that had been overlooked in the past. The photograph is a variant of the cover image used on the single “Got My Mind Set on You” and shows George dressed in black with his guitar alongside, against a beautiful blue sky background dotted with fluffy white clouds.

Gered is so well known for photographing The Rolling Stones and Jimi Hendrix that it’s easy to lose sight of the fact that he also photographed half The Beatles. (We also feature a Paul McCartney tryptich in the exhibition, so that ‘s two out of four Beatles covered.)

Gered has very fond memories of the shoot with George: “I had met George on several occasions but had never photographed him. Therefore I was delighted when the art director and my dear friend David Costa asked me to shoot the Cloud Nine cover. We shot in my studio in Hampstead and had decided that we would use several painted backgrounds of various cloudy skies, as well as a huge textured canvas. George arrived by himself without any entourage and was a wonderful and most patient subject, as I had decided to shoot on the rather slow and laborious large format camera. He regaled us with tremendous, funny and occasionally filthy Liverpool stories over lunch and involved himself with all aspects of the shoot. The heroic, ‘man in black’ portrait was influenced by one of the cowboy heroes from my childhood called Paladin!