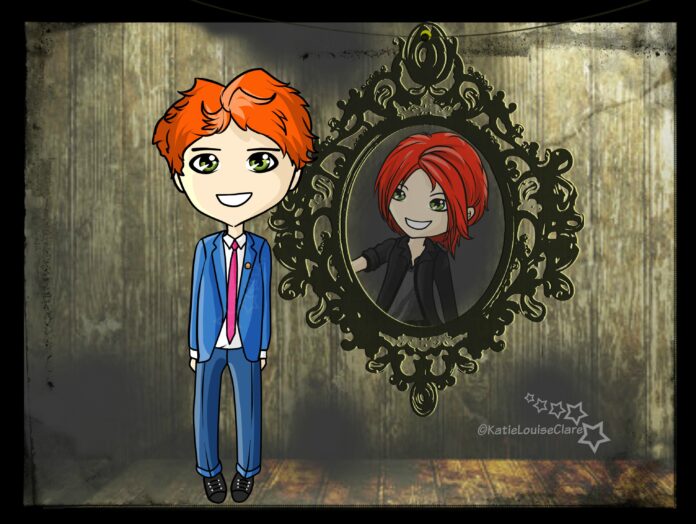 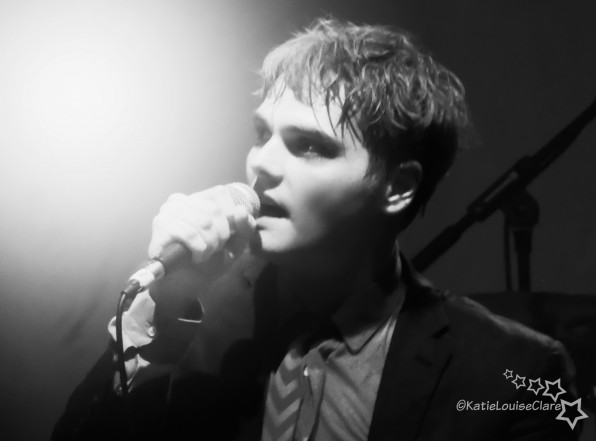 Photo of Gerard above © Katie Clare

Former My Chemical Romance front-man Gerard Way moves away from the reputation of his previous band, playing a set of material from his debut solo album. Louder Than War’s Katie Clare reviews.

The long queue that stretches along Whitworth Street and around the corner along Oxford Road is a buzzy trail of black coats bright hair and the occasional alien mask clad head. It’s quiet at the front as they’ve been there all night – all day assuring them a front row spot, further back there is more animation: singing, jumping about as well as plenty of cheers and applause when the Manchester contingency of the Anonymous Million Mask March passes by. 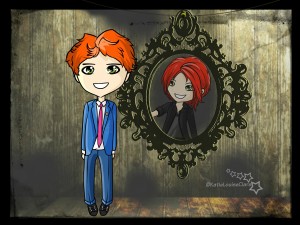 (Cartoon of Gerard right © Katie Clare – see below for more info.) Sometimes what you’ve done will unshakably shadow what you do and Gerard Way really has quite a monumental sized adumbration to break out from under. The audience filling the Ritz are awash with signifiers garnered from My Chemical Romance and considering the relatively short time since Way’s solo album ‘Hesitant Alien’ was released all indications point to the fact these are fans for the most past that have followed him into this new creative apparition. ‘Hesitant Alien’ is not a My Chemical Romance album (not that My Chemical Romance ever released albums significantly alike) and while it is a bold album it’s charms are not immediate – it’s Way himself that has created bonds strong enough to entice an audience to follow him on his solo journey.

Way’s band The Hormones take to the stage to quite the most deafening noise: a level that is incredibly shattered moments later when Way dressed in a black suit and bright pink and grey chevron tie bounds on stage. Opening his set with The Bureau which bathed in the neon lights and emboldened with several hundred in unison voices has shed the lethargy of the studio version it still feels more of introduction rather that a song in it’s own right it does however merge seamlessly well into Action Cat one of the strongest and identifiably Way-esque tracks on the album ‘Did you miss me ’cause I missed you’ he near pleads as he swiftly pounds back forth along the stage.

Way has always interacted with his audience and tonight speaks openly and often “Right now it feels like … young women are coming under fire” he states “I can tell you why I think that is: the old white guys at the top are really terrified of you, you guys are going to be running things, I’d like it if you ran things”. A long time advocate of equality his spoken observations come across honest, heartfelt and motivated by a desire to inform and share: it’s enthusiastically accepted interaction.

Much has been made of the British musical influences that saturate ‘Hesitant Alien’ these remain apparent live as Suede, Sleeper, The Stone Roses, Joy Division and The Sweet (really I swear it’s in there) are brought to mind. Sure Drugstore Perfume, Maya the Physic, Zero Zero and No Shows are waving their Union Flags for all to see, but it’s more in a loving waft than a hurricane of homages especially in this physically charged environment. 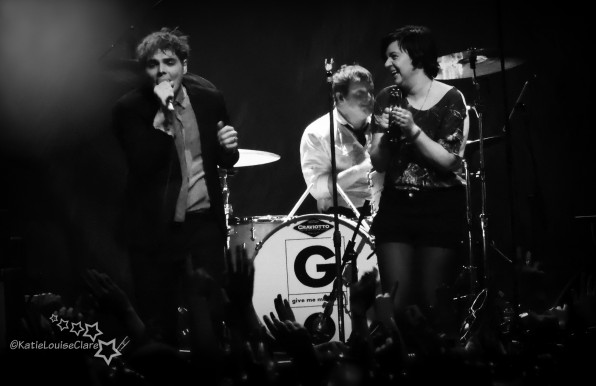 “I sound like an activist. I’m becoming an old hippy” admonishing himself with a laugh Way shares something with someone at the front “Honestly” he states “Just be good to each other ,just love each other, that is all you have to do. Lets make a promise never ever to comment on somebody’s body ever again no matter who they are. What they’ve been like. Just say: Hay I like your shoes. Hay I like your face. I like your face Manchester.”

The British flavour continues as Way covers two tracks in his set: the first a smoky rendition of The Water is Wide written by Cecil Sharp the songs singer alumni include Pete Seeger, Luka Bloom and James Taylor. Bringing his set to an end with a gritty sexed up version of The Jesus and Mary Chains Snakedriver.

Of course there’s the leaving and the screaming before a single encore Dasher: a simple story about a girl who falls in love with a reindeer: we’re lead to believe. A song that dances around suggesting at a never arriving crescendo unless you count the screaming again. While I miss the pageantry of My Chemical Romance – Way’s performance certainly echo’s the specialness of them: he passionately showcases his progression away from what was and hints that there is plenty more still to come: that oppressive shadow is already looking like it’s starting to fade.

For full details including how and where to buy tickets go to Gerard Way’s Official Website.

More information about Katie’s illustrations can be found at the Editions Prints Facebook page.