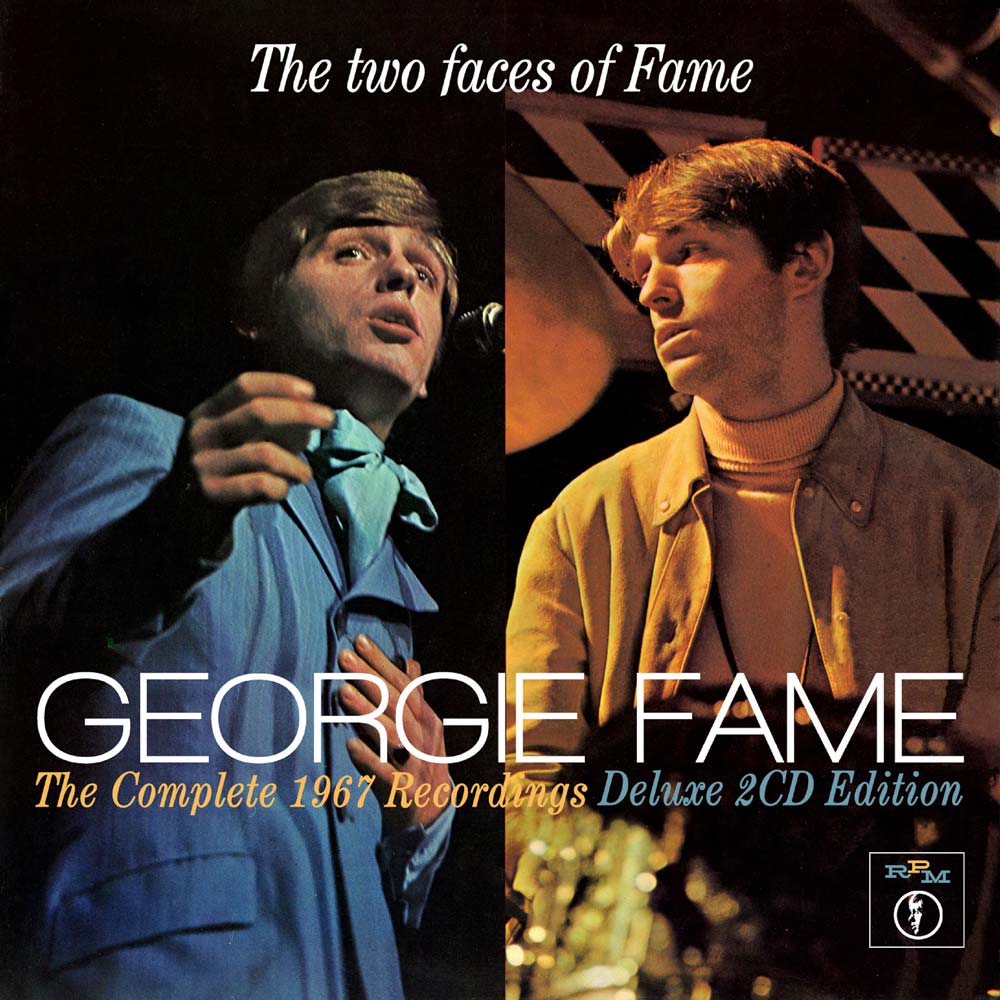 Subtitled The Complete 1967 Recordings, this deluxe reissue houses both mono and stereo versions of Fame’s first CBS album, plus many bonus tracks. LTW’s Ian Canty looks at the man behind many a sweaty Marquee Mod night…………

By the time Clive Powell, renamed Georgie Fame by Rock ‘n’ Roll impresario Larry Parnes, moved over from Columbia Records to CBS at the tail end of 1966 he was a firmly established recording artist and live attraction. In the early days with his backing combo the Blue Flames he had delighted the Mods with his mix of Blues, cool Jazz and Ska at legendary 60s clubs the Flamingo and The Scene. In doing so he carved out an enviable reputation for himself as the real deal in a pre-Fabs UK. Soon record labels were clammering for his services and after signing with Columbia he reached the charts several times after making his debut with a cover of Rufus Thomas’ Do The Dog in 1962. Two years later he claimed the top spot on the UK Top Forty with the ultra-catchy Yeh Yeh. Fame had arrived.

Despite many hit singles and still being an undisputable force live, Fame was surely far from the cutting edge when this album was released in the Summer Of Love. If the album’s title was a play on his standing as a “face” to the Mods, most of those original stylists themselves had moved onto other things by 1967. Psychedelia was everywhere and even Fame’s potent and wide ranging musical palette lacked any hint of the trippy, loved up vibe. Of course this matters far less now, but back then he seemed to cut a slightly anachronistic figure. Even his keyboard rivals like Zoot Money (who is mentioned in amended lyrics to Keep Your Big Mouth Shut on The Two Faces album) and Graham Bond had chanced their arms in Flower Power. It appeared as though Georgie was looking past the emergent Hippy generation towards an older set of musical enthusiasts as the target audience for his first CBS LP.

Though he was long gone from Parnes’ auspices by then, the manager’s method of the raw “rocker” being moulded into a “light entertainer” appeared to be being applied by Fame’s new record company CBS, stressing Georgie as a soloist and moving him towards something with more “across the board” appeal. He had begun to re-shape his approach to something that harked back to the “big band” sound of Jazz favoured pre-Rock & Roll, with plenty of Blues in there too. The Blue Flames, such a big part of Fame’s live success, were handed their cards and in their place the Georgie Fame Band appeared. Indeed as the 60s turned to the 70s Fame would become a familiar face on television variety shows as his success in the Pop market died down. But for the time being he still had the credibility won during those wild Mod all-nighters in the clubs, chart success and an audience eagerly awaited his next move.

The Two Faces Of Fame was originally supposed to be a live album, recorded with both his new backing outfit and also the Harry South Big Band (who played behind Fame on his previous album Sound Venture, which somewhat pre-empted the sound of The Two Faces…). This outfit contained many of the UK Jazz scene’s leading lights including the legendary tenor saxophonist Tubby Hayes and Ronnie Scott. A live album seemed an obvious ploy to try and get Georgie in the environment he was comfortable with and once there, to stretch his appeal. This proved an ill-starred venture though because the Royal Festival Hall, the venue where the recording took place, was suffering from horrendous problems with its acoustics. This meant only about half of the tracks set down on tape could be used and studio recordings would be necessary to fill things out. Hence it became one side live, one side not and the album title made a little more sense.

On this LP most of the material is made up of old standards – which again seems to me to be looking to appeal to an older set of fans. Of course given the talent on show they are all expertly and exquisitely rendered and Fame comes across as a natural on stage. Things Ain’t What They Used To Be (think Duke Ellington not Max Bygraves) is a lively piece of Hammond-laced Blues and the plaintive C’est La Vie really hits the spot if rainy day Jazz ballads are your thing, it’s a beauty really. On River’s Invitation he even forsakes keyboards and (to paraphrase the Stranglers) straps on a guitar to play some fine R & B.

What is problematic for me with The Two Faces… is why someone still scoring big hits on the charts and more than capable of writing their own quality material (as is clear from the bonus tracks here) should record a set of covers in a style more in vogue a decade previously? In a way it was a brave move, perhaps seven years into his career he was feeling a bit long in the tooth for the Pop Market and just wanted to deal with something more substantial. Whatever the circumstances, Fame was offering something different to the scene in 67.

The main track on the album that seems the only real throwback to those balmy Soho nights is El Pussycat, an up-tempo and danceable R&B/Soul instrumental, with the brass section to the fore. What this album boils down to I suppose is a higher quality, more refined version of his past and there is an undeniable logic to this move. It’s not a bad album by any means though, in fact very well put together and listenable. Certainly an antidote to what almost everyone else was doing at the time too (for the most part desperately grafting Psychedelic accoutrements onto their music, however ill-fitting).

The Two Faces Of Fame is featured here in both stereo and mono mixes, with the later being better for me, sounding a bit sharper and powerful. It is a good record, though for me a more compelling case for Fame is represented by the bonus tracks. These present a picture of a versatile and vital musician. A case in point is the self-penned No Thanks, for some reason only a b-side to the strangely brooding Try My World. This song is chock-full of casual snottiness and undeniably Mod cool, it’s the closest Georgie would ever get to a Garage Punk attitude and a real keeper. Also featured is his final number one The Ballad Of Bonnie And Clyde, designed to cash in on the film and completed with minimal involvement from Fame himself. This record quickly became a milestone around Fame’s neck – a novelty record not really in character for someone who prided himself on authenticity.

Away from that song, there’s a load of great tunes to enjoy in the add-ons. There’s a fine version of Procul Harum’s Conquistador and Bidin’ My Time (again penned by Fame, showing he was moe than capable of coming up with good stuff of his own) which also should really have been the top side to a single instead of a flipside, some great Funky guitar on this one. The moody Mod Pop version of John Sebastian’s Respoken really hits the spot too, who knows why this never gained official release at the time. In fact it is among seven tracks never previously issued, all of which have something to offer. The Two Faces… is rounded off with some Italian versions which complete the recorded works of Fame in 1967.

The Two Faces Of Fame as it is presented here shows an artist at the point where show businessness beckoned a path away from the “Pop” scene. It represents the final breakaway for Fame from a lot of things: Columbia Records, his band the Blue Flames, the Mods and the zeitgeist. There’s a lot of great tracks on here and RPM have done the usual fine and thorough job with the sleeve notes, overall presenting a very attractive package. All of which paints a compelling portrait of Fame, poised between the hip clubs of his past and the mainstream.