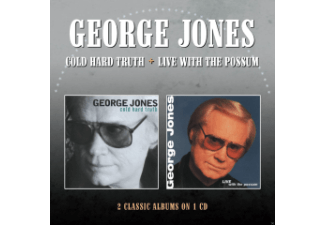 First album is the studio set “Cold Hard Truth”, first released in 1998 on Asylum Records. Recorded under the guidance of producer Keith Stegall, it was at the time hailed as Jones’s best album in 20 years. The material although written by other songwriters has definitely a biographical feel to it and some of songs seem to recount the numerous troublesome episodes Jones suffered throughout his life. Opening song “Choices” is certainly of that category with lyrics such as “From an early, I liked drinking” or “There were loved ones but I turned them away” and the title track sounds like he is doing his own indictment. The album sees Jones chuck out the glossy eighties sheen that ruined most of his early nineties albums for a back to basics approach with pedal steel and guitar at the fore. However all is not doom and gloom with a series of fast country rockers such as “Sinners and Saints”, “Ain’t Love a Lot Like That” and “Real Deal”, all of them featuring great interplay between Brent Mason (electric guitar), Paul Franklin (pedal steel) and Stuart Duncan (fiddle). It’s on the tearjerker ballads that Jones really hits home on “Cold Hard Truth”, his velvet voice working wonders on songs like “Day After Day” or “Our Bed of Roses”  which cement his place as one of America’s finest country and western performers. The album was a great return to form

The “Live With The Possum” album is an altogether different proposition. Recorded in 1993 at Knoxville’s Civic Centre it features a spoken word intro by country singer Alan Jackson and is followed by an announcement by Jones that “We’re going to have a great big time tonight”. The show is all showbiz glitz and well oiled live banter. Starting with the novelty song “No Show Jones” about his late seventies tendency to not turn up for gigs, the setlist then mixes fast country rock romps with ballads. You can just picture an arena full of middle aged Americans downing cans of Bud and having a good old time. It’s definitely something that must be experienced “in the flesh”  like the Superbowl or the Indianapolis 500. The crowd cheers loudly to George’s most famous songs (particularly on “The One I Love Back Then” or “Who’s Gonna Fill Their Shoes”). He surrenders to the very American tradition of the medley towards the end of the show with a run through “I’ll Share My World With You”, “Window Up Above”, “The Grand Tour” and “Walk Through This World With Me”.