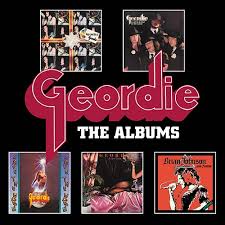 Box-set contain five albums by the band fronted by AC/DC’s Brian Johnson in the early to mid seventies – Ian Canty looks at his formative work before he joined Australia’s favourite Jimmy Krankie impersonators….

Though now mostly remember as a footnote in the story of AC/DC, there was a point in time that Geordie, who were being touted as the North East’s answer to Slade, could have made it into the big time of Glam super-stardom. Between the late summer of 1972 and August the next year they scored four straight chart hits, going all the way to Number Six in the national listings with “All Because Of You”. Perhaps if the début long player “Hope You Like It” had made the charts, or if “Black Cat Woman” hadn’t got lost in the Christmas run-up and flopped to stop the momentum, well who knows?

To be honest they weren’t in the same league as Slade, the songs written mainly by guitarist Vic Malcolm were okay but not up to the standard of Holder’s Heroes, nothing wrong with that though because it is setting the bar pretty high. What they did do well was basic Hard Rock with a Glam tinge and Brian’s unmistakable hoarse vocal yelp atop the mix. Building on the hits and good local support in their home-town of Newcastle, they issued their first LP. Although it didn’t chart it is an enjoyable enough listen and probably their best record. If anything they remind me of AC/DC’s (I promise to stop mentioning them) “Mini-Mes” Rose Tattoo with the tough, bluesy, 12 bar rock n roll on offer here. “Geordie’s Lost his Liggie” does stray a little into Lindisfarne territory, a crowd pleasing sing-along for the locals which also translated over to Oz when they toured their too. This edition includes all the successful singles and b-sides and probably offers the best overview of the band.

Album two “Don’t Be Fooled By The Name” had Geordie dressed up as gangsters (by photographer Mick Rock who also snapped Bowie and Iggy in this period) on the cover and mostly followed the tough rocking good time pattern of the début, if anything dropping a little of the Glam element as that was a bit passe by 1974. Much of the sound here has much in common with the straightforward, unfussy approach of Free. Most notably, they followed in the footsteps of original Newcastle bad boy chart-busters the Animals by covering “House Of The Rising Sun” in their own particular style. The last two tracks are the most interesting, real rabbit out of the hat stuff though – the eerie, almost Psychedelic “Little Boy” gives way to the slow burning album ender “Look At Me” suggesting they were looking to get away from the format a bit and were not quite the one trick pony they may have appeared.

Though now on a downward slope and with Punk approaching, Geordie decided to mess further with the formula in search of a hit on “Save The World” which came clad in what could be construed as a (erm…) slightly sexist sleeve. There is a more pop approach on what was their final single “Goodbye Love”, a queasy ballad in “Light In My Window”, some brass on “She’s A Teaser” and even a Reggae beat on “I Cried Today”. They were clearly trying to fling mud at a wall and see if anything stuck, but having said that, this scatter-shot approach is strangely quite appealing. “You Do This To me” harks back to their earlier days but even that has acoustic interludes and a pumping piano.

“Rocking Horse” is quite pleasing with its stun guitar breaks and Pub Rocking structure and next track “Fire Queen” is musically very punchy, despite some dodgy lyrics there’s a decent tune in the slightly unusual arrangement. The words are a bit of a problem throughout here, but if one can get over that deficiency there’s fun to be had. Included with this one are four solo Brian Johnson tracks, which are mostly here for completeness sake; drippy ballad “I Can’t Forget You Now” is so out of character that it doesn’t ring true, though “Rockin’ With The Boys Tonight” is a much more authentic effort, being the kind of thing Thin Lizzy specialised in.

You can sense the confusion of the band as what have might have seen a good idea in theory tends to fall down in practice, but it does keep things interesting rather than sending out another sound-alike LP. This looked like the end of the road for Geordie as by this point in time Glam was long gone and with Punk on the horizon they seemed completely outmoded. So it was a surprise when the fourth LP by the band emerged in 1978.

Brian Johnson had quit for a solo career and he sings on only of few tracks which were recorded around the time of “Save The World”. Someone called Dave Ditchburn took over and whilst I will concede he had a great name, it doesn’t sound like the same band. Housed in another “questionable” sleeve “No Good Woman” was the bitter end of Geordie. The better tracks bring to mind fellow stack-heeled contemporaries the Sweet’s recordings in the same year, Hard Rock with a definite pop edge. But there are a few stinkers on here, “Rock N Roll Fever” is appalling and “Victoria” (not the Kinks song) just a water-treading instrumental. “Sweet Little Rock N Roller” even sounds like a bid for the Disco market! However “Give It All You Got” is a decent synth-led rocker, in fact squelchy electronic keyboards do tend to dominate here and that’s not necessarily a bad thing, giving some ho-hum efforts at least a little mystique.

It was no real surprise that the band folded completely after this record came out to no real interest. In the downtime between being summoned to the big leagues after the sad death of Bon Scott, Brian worked in car repairs almost convinced his chance of glory had gone for good. Just prior to that call from down under that would change his life forever, he recorded “Brian Johnson and Geordie Revisited”, summoning the band one last time for some retreads for their former glories which whilst fun don’t really rival the originals here.

It goes without saying that this collection is handsomely presented in a clamshell box with an accompanying booklet that tells the Geordie story, tonnes of bonus tracks, plus each album is housed in mini-reproductions of the original sleeves. This box will appeal mainly to big fans, Hard Rock and Glam aficionados as well as AC/DC completists, but there’s a fair amount of diverting material on here that may be a bit “of it’s time”, but nonetheless show that the band had the power to kick out the jams at least for the first three LPs. After that it is a bit of a trawl for decent songs as Geordie floundered, but as a portrait of a decent early 1970s band that could definitely rock up a storm, it has value.