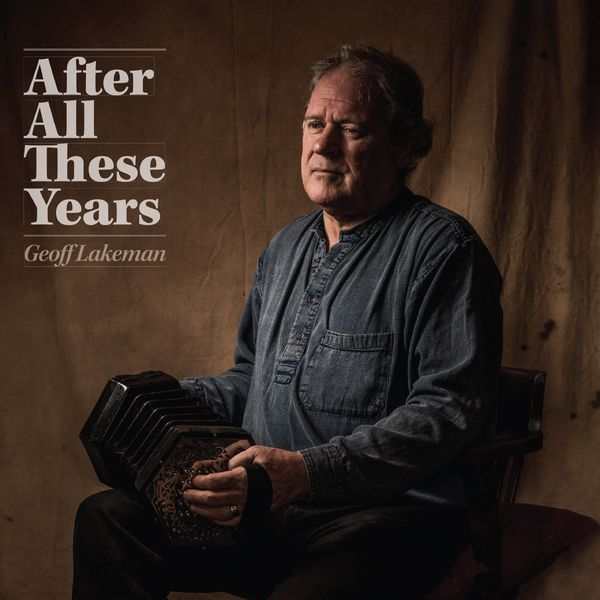 GEOFF LAKEMAN: AFTER ALL THESE YEARS

How many musicians reach the grand old age of  almost seventy before  releasing their  first album? Then you spot the Lakeman name and it seems even more unlikely that Geoff, who  has provided the nation with a rich musical heritage, hasn’t actually got down to recording anything himself. ‘After All These Years’ does what it says on the tin and sets the record straight.

A duet concertina player who’s been active in the music scene for more years than most it seems all the more remarkable that this is his first record. A bunch of songs self written and contemporary,  songs from Ireland, across the Atlantic and naturally Cornish songs make up a set which has a very organic and rustic feel and one which has been brought to life and set for posterity by the assistance of  a guestlist to die for. The list is almost like a who’s who – most of whom are his family… Seth, Sam and Sean, the latter with the producer’s hat on. Add  the daughters in law Kathryn Roberts and Cara Dillon, plus  Jim Causley, South West Lost Boys Sam Kelly and Jamie Francis and the legend that is Nic Jones who allegedly had his arm twisted when spotted walking his dogs. An embarrassment of riches indeed and it would be so easy to get carried away on the names who willingly come to the party to pay their respects and dues, but does it detract from what he does as a fine solo performer.

Yes there’s the feel of a family singalong on the opening ‘The Farmer’s Song’ and the  all stars  add their own subtle little cameos yet kudos to Sean Lakeman in his producer role for allowing his dad’s trademarks to shine through. A soft local burr and the unpretentious concertina are allowed to rise above any sparkling touches added by the young pretenders to the extent that you have to pay attention  to pick up on some of the touches the  contributors  have added.

Geoff naturally gets his own showcase moments, stepping up  solo on several occasions: ‘Bonny Irish Maid’, ‘Ye Lovers All’ and the amusing  little curio that is  ‘Doggie Song’ (don’t be surprised to hear this on some future Rick Stein programme).  A glimpse into what he does when he plays out as a solo performer. Lyrically, the subjects are familiar, his own ‘Rule And Bant’ for example, picking up on the sort of theme that Seth regularly mines, a narrative which  traces a miner’s tale, accompanied naturally by Seth.

It’s all quite heartwarming and the result is an album which is going to prove a slow burning surprise package in the folk world – a late runner coming up by the rails and simply much more than what he modestly calls a mere “musical memento” for his grandchildren.

You can watch  Geoff playing ‘Rule & Bant’ from the album  played live at Baring-Gould Folk Weekend in 2015 here:

He is  also on Facebook  and tweets  as @GeoffLakeman