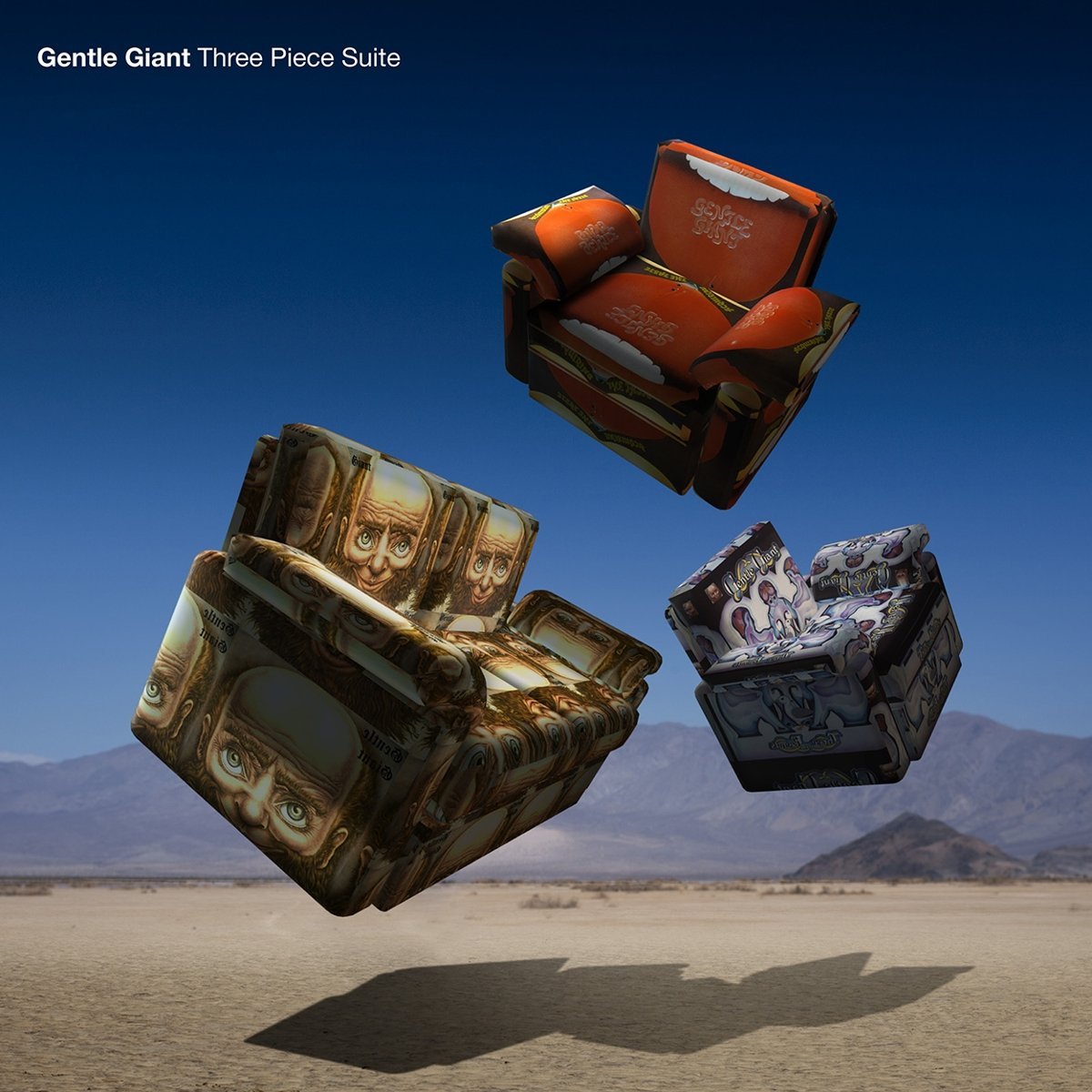 A band whose music is essentially something of its time, now repackaged in a brand new sparkling re-issue; a  specially curated selection from the first three Gentle Giant albums. Mike Ainscoe twists the dials of the time machine…

It really does seem like going to another time.  But not for some of us sadly… Back in 1970, Gentle Giant were emerging  as one of the pioneers of a new progressive scene. The sixties had seen the likes of Zappa, Procul Harum and Soft Machine picking up the baton from the Beatles studio exploits. The Moody Blues and the Electric Light Orchestra  had played with orchestration within their song structures but it was a time of exploration and free musical thinking. Pink Floyd, King Crimson and ELP were setting new standards and within a year or two the scene would have exploded.

In our  technologically advanced twenty first century, revisiting Gentle Giant presented an issue with the absence of multi track masters for their first three albums, with just a handful of tracks surviving. Hence the decision to (re)mix and match the songs that were available and present in the new format as a suite that represents their early days in 5.1 surround glory.

Cue the professor of 5.1 mixing, Steven Wilson who has laid his hands on the works of fellow trendsetters King Crimson, Jethro Tull an Yes but has done a particularly splendid job with the GG material at his disposal. He’s dipped his toes into the catalogue with his work on the Octopus and The Power And The Glory albums and possibly despite not being one of the bands held in the same regard as some of their progressive peers, Wilson himself has acknowledged the esteem in which Gentle Giant were held in, saying “I thought music like theirs would save the world from mediocrity.”

To his credit, Wilson never outdoes the original mixes but adds clarity, definition and detail. In this case there’s a stunning reworking that brings to the fore the  eccentricities and the quirk so predominant in GG’s work. Never mind that it’s essentially a ‘best of (what’s available)’ the first three albums; if you didn’t know, you’d never spot the join. He highlights the  complexity in touching on classical, medieval, baroque, rock, blues, soul and jazz – you name it, it’s all goes into the pot together with the multi-skilled multi-instrumentality and those harmonies that have surfaced in band after band in the past thirty odd years. Yes, at times there are challenges, but having set the standards for others to follow, a fresh appreciation makes for a much more palatable experience than in the more conservative the early seventies – we’re used to the taste. That’s especially considering the Gentle Giant debut was heavily criticised for sound issues, the material now finds itself totally polished and in a form where the nuances and the bravado can be dutifully appreciated.

The sonic wizardry serves to highlight  the clarity of the acoustic guitar at the start of Nothing At All and the regular swathes of mellotron strings as well as the regular bouts of dynamics and cascades of instrumental passages that seem to have been made for this sort of presentation. Acquiring The Taste certainly was prophetic as they cast their net further and in the words of the sleeve notes, aimed to “expand the frontiers of popular music at the risk of being very unpopular.” An album from which the pair of Pantagruel’s Nativity and The House, The Street, The Room make the cut yet GG revert to the ultimate and almost obligatory in progressive terms – the concept album Three Friends whose second side in vinyl terms allows for an uninterrupted, as it was, encounter with the 1972 Gentle Giant. One whose peculiar blend unquestionably saw them linked with those flying the Yes and Floyd flags.

Peel The Paint’s keyboard dalliances and the  unfolding pictures  on screen in Schooldays strike a nostalgic chord as the Three Friends material plays out on the Blu-ray. There’s also the inclusion of an unreleased gem in Freedom’s Child from the first sessions done with the legend that is Tony Visconti. His visionary approach that involved him pulling off  “some stunning audio effects that gave the sound more depth and immediacy”

The Blu-ray and its astounding surround mix is the only way to go to be fair. One that goes on to contain a plethora of extra content: all three albums are presented in 96/24 Stereo along with instrumentals of the remixed tracks with due care and consideration to the visuals. A case of how it was done and how it should be done in perfect harmony.

You can hear The House, The Street, The Room  from the album here: