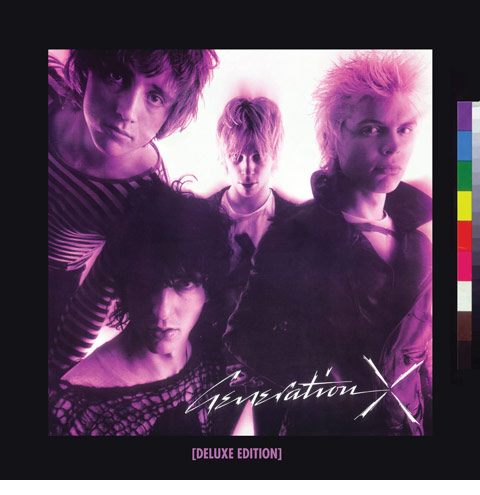 Remastered/Re-issued/Expanded… the Definitive 1978 Punk Debut Album.  Absolute Classic… or poseurs and ‘plastic punx’ responsible for Billy Idol being unleashed into popular culture. Ged Babey brings in star witnesses for the prosecution and defence before deciding.

Probably the ‘punk rock’ band and debut album which divides people more than any other.

Witness for the Prosecution. Ian Moss. (Featured in I Swear I Was There book and documentary. Singer in a dozen Salford bands / co-runs German Shepherd records)

There are some bands that you just know are not for you…  very near the top of my own personal shit list were London poseurs Generation X.  What was it about them that drew my ire ? A one word answer to that question: Everything.

Yes, I hated everything about them; the studied look, pouting and preening with bad boy Billy Idol in particular wearing an ever present sneer that reminded me of Cliff Richard.

The ham-fisted, ultra pedestrian rhythm section, the heavy rock guitar and the self conscious vocals that tried to snarl but were simply flat and limp.

I had the displeasure of seeing the band throwing every cliched rock star shape on stage in the past and I’d managed to only ever hear their singles. This evening I have listened to the full debut LP and it has been painful and an experience I shall never repeat. They were much worse than I previously thought: deadly dull without a shred of originality or a spark of passion it is a cliched punk by numbers affair made by very dull people devoid of talent.

Where they held the aces was of course they were pretty boys dressed to the nines and connected to influential people, they were the little girls’ punk rock wet dream. Am I being harsh ? Am I fuck!

They were ludicrous and idiotic, listen to ‘ Kleenex ‘ five minutes of lumpen stodgy riffing with Billy singing about cleaning up the world’s mess with a paper hanky. The utter drivel masquerading as social commentary on Wild Youth, admittedly redeemed in part by the ruse of ripping off Slade for a chorus.

This album contains some of the worst songs I’ve ever heard in my life whilst the two best tracks ‘ Your Generation’ and ‘ Kiss Me Deadly’ shamelessly rip off The Who and Bruce Springsteen respectively without coming anywhere near emulating the power or craft of either.

I’m not a person afraid of acknowledging when I’ve made a wrong judgement about a band but in this case I was spot on.  Generation X were appalling….

Witness for The Defence:  Paul Simmonds (founder member of the Men They Couldn’t Hang and in 1977 Southampton punk band Catch 22)

I can count the bands I have truly loved on the fingers of one hand; The Clash (compulsory), The Manic Street Preachers, The E Street Band, The Spiders From Mars and…Generation X.

It’s a mighty long way down rock and roll (a Mott the Hoople quote that Generation X would definitely have appreciated) but, goddammit, 40 years? How can that be when it only took me 40 nanoseconds of the clarion intro to ‘From the Heart’ to be back in my box bedroom wondering where I could buy a pair of pink drainpipe jeans?

Obviously the Pistols meant it man and The Clash were going to start the Revolution and the Damned were fun and the Jam were…good at jumping in the air while playing…but Generation X were GOOD LOOKING and that was important too. Okay, so they were shallow, vain and arrogant. But then so was I. So were most of us…that was rock n roll.

And nobody loved being young as much as Generation X, not even Donny Osmond. ‘Your Generation’, ‘Wild Youth’ and, in case you didn’t get it, ‘Youth, Youth, Youth’ all thundered with the pulsing message: we are young, we are loud, we are pretty. That was about it but sometimes that’s all you need.

I could relate to the narcissism. I had Kiss Me Deadly stencilled on my T Shirt. I virtually lived every one of the songs on this potent and evocative album.

‘2 punks choose to risk the subway for a tube to Piccadilly’. Oh yeah.

‘Going round and round on the Circle line’. Most Fridays.

I certainly learned a lot from all the bands of this era but Generation X showed me that being young and having good hair was important too. And that if it all went wrong, well just use a Kleenex and start again.

I’ll come clean. I love this album probably more now than I did at the time. I was a Buzzcocks man.

For the past thirty years though, I have banged on about how UK Punk Rock 1976/78 was best exemplified by the bands who started from scratch.  Self-taught, intelligent people who wanted to do something new: Devoto’s Buzzcocks, the Adverts, The Slits, Subway Sect, the Prefects, Penetration, the Fall, the Raincoats, Alternative TV, X-ray Spex, the Banshees and even Eater.  Dismissed as the second division, these were THE essential bands who were punk… to my mind, and many agree.

Generation X don’t fit into my theory.  But they made simply the most irresistible glam, pop, mod, rock’n’roll amalgamation and released it as their debut album -the eponymous Generation X.

Without a doubt one of THE best debut albums there is from the timeframe.. . It is a total classic.  Faultless. Thrilling. Tuneful. Catchy. Immediate.  A great Pop Record.  It sounds fresh, cocky, world-beating. It sets your pulse racing…

But it was and still is a battleground for punk authenticity and snobbery.  Were they real or were they ‘plastic’.

(I first heard the term ‘plastic punk’ in 1977 as a 12 year old. Wise old 17 year olds used it as term of derision for bands and people who weren’t considered to be ‘real punks’.  It was the worst insult you could level at a band. )

Of course, after all this time, it shouldn’t matter…  Generation X -the album still sounds fresh, vital and fun.  It also sounds silly and cliched.  It is irresistible, but It’s like a West Side Story re-enactment of Punk in London.

If you don’t believe me you can trace the lineage from Generation X through to Green Day, their cover of Kiss Me Deadly, to American Idiot, to their Broadway Musical of the same name.

It could be maintained that Generation X went against the orthodoxy of punk: Instead of No Elvis, Beatles and the Rolling Stones – two get positive namechecks in Ready Steady Go and the Elvis lip-curl validated ‘the King’.   Instead of opposing heavy metal guitar solo’s – they use one to end the album (That Punk-Hendrix maelstrom that makes up half of YouthYouthYouth!) . There are unashamedly glam stomps and pop choruses (Wild Youth IS the Punk Rock ‘Tiger Feet!) But at the same time they kept referencing Punk in the songs – even including product placement for ‘Malcolms strides’ (When it was Vivienne who made them!).  They wanted it both ways -their cake, and to eat it (off a gold-disc following a residency on Top of the Pops).

There are so many corny and fkin’ cliched lyrics scattered throughout the album is is difficult not to smile throughout:

The spray can is the gun which shoots from my hand….  Our hair was short – we said what we thought …..the Snooker Hall is empty, Cause they’re all out playing pool …  Soon you’ll get your gear form Marks and Sparks / Punks ‘ll take over the Top of the Pops….

Promises, Promises tries really hard to be Gen X’s Complete Control with its reference to A&R men not giving a shit about their rock’n’roll dream and James’ backing vocals on that and other tracks are pure Mick Jones.  Nonetheless, no matter how ludicrous, the song still works and is probably another which Billy-Joe sings word-for-word in the shower.

Derwoods guitar-playing is phenomenal -once you accept he is a Metal virtuoso trying to condense it into a punk format -rather than a three-chord-wonder or ground-breaker. Mark Laff is a cool drummer and comes close to being a player on a par with Keith Moon.  Tony James was an enthusiastic ideas man and the brains of the outfit rather than a musicians musician.   Weirdly and technically Idol is the weak link as a singer, but a decent vocal-stylist with a love of rock’n’roll melodrama.

There was a codified elitism in the song lyrics which rankled with some: 100 Punks dictated that you “had to have a look” to be one.  The Tube stops and Soho streets listed meant the Londoncentricity was ingrained.  Punk for many meant the opposite to exclusivity: If anyone can do it (yourself) any one can be included.

But despite this, it is still a great, action-packed, solid-gold-easy-listening and quite brilliant album -as long as you don’t take it seriously.

You may want to know about the ” 11 previously unreleased recordings: outtakes, a single mix and a number of mixes made by engineer Alan Winstanley”  Well, they are all pretty much as you’d expect.  A bit rawer, a bit more of a rough edge and in the case of the songs which ended up on the album, they are the same studio performances but without the backing vocals and with bits of studio banter left in.  They don’t do Tony James reputation as a bassplayer much good as his playing is spirited, energetic and competent to be brutal.

That old scenario -What if Punk Never Happened ? The Pistols didn’t employ Lydon after his audition or they didn’t go on Bill Grundys show?  Well, Generation X  probably  STILL would’ve happened somehow – Billy Idol and Tony James had that drive and determination to be Great Big Rock Stars – but they would’ve been a glam/ rockabilly/pub rock band – and would’ve created their own teenage mythology.

Generation X were the brashest of their Generation. The cockiest, the best-looking, the most ambitious and their debut album was their Finest Hour.  They would never better it. (King Rocker aside – classic 45!)

For every serious teenage-boy who ‘hated’ them there were five fun-loving teenage girls who loved them. And for every twenty-three year old rock fan who despised them there five thirteen year olds who worshipped them.

If you can’t make up your mind whether I’m trying to praise or slate Generation X, well, good:- I’m doing both. I love this album -the original and this beautiful, well worth the money, Deluxe edition… but I hate myself for liking them, because it goes against everything I ‘believe’ about punk rock and art and commerce.

The Generation X expanded deluxe edition  set has been newly remastered from the original production tapes and includes 11 previously unreleased recordings: outtakes, a single mix and a number of mixes made by engineer Alan Winstanley