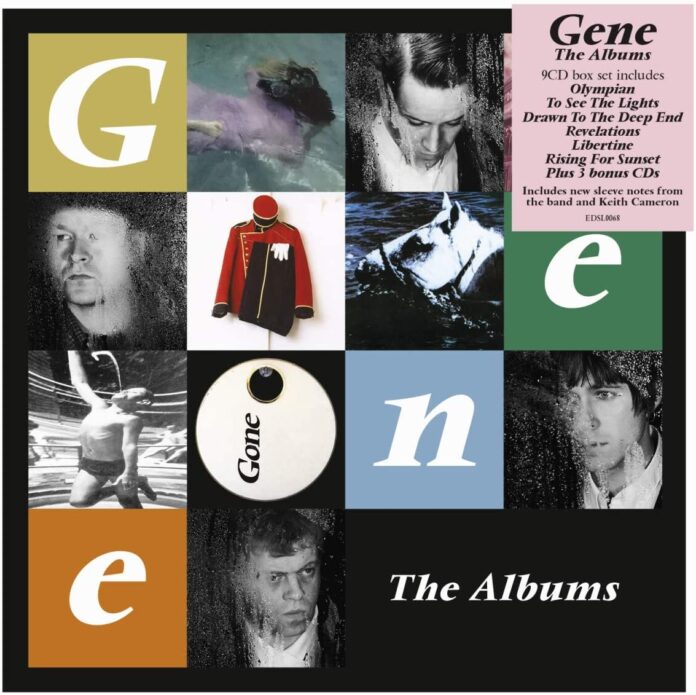 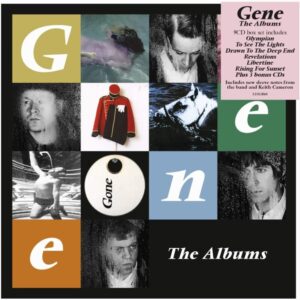 Indie heroes Gene get the re-release treatment with this superb 9 disk CD and 8 coloured vinyl LP career retrospective featuring all their studio albums. Live album Rising for Sunset,in the CD Box set only. And extra discs featuring non album tracks/singles B-sides and demos. Also available is a 2 LP Best Of – Yours For the Taking.

I’m going to start with the lazy references. Gene attracted an audience similar to that of The Smiths. An adulation that exceeded the mere enjoyment of the music they created. When you listen to this retrospective, you can hear why. The lush instrumentation, the warm all-consuming vocal, clever, witty lyrics and couplets often tackling the darker, seedier side of life. The band talked to those individuals. Martin Rossiter himself has talked about these comparisons in the past. Most recently, in 2017, denouncing, like many other fans of The Smiths, any association with the increasingly malignant force that The Smiths frontman is becoming. Even to the extent of expressing regret at appearing on the same stage at a Meltdown Festival. Thankfully, there is no need to denounce any associations with Gene. This box set is a timely reminder of just how good this band were, a cause for celebration.

Past lazy reference number 2. Unfortunately, due to the timing of the band’s formation and appearance on the UK “indie scene”, the band were lumped in with the music press tedious labelling of many bands as part of the Britpop scene. A label that, personally, always made me cringe. To this music fan, Gene didn’t deserve to get labelled along with the huge number of turgid and tedious third rate, for want of a better phrase, indie guitar, bands. Record labels seemed to push these bands out on a regular basis to take advantage of the wave of success seen by many of the bands in the so-called scene.  Gene stood head and shoulders above the fray. Musically, lyrically, in their sartorial elegance and demeanour. They deserved to be huge, as the track from their sophomore album stated – We Could be Kings. They were – and more.

Being a fan from the early days (I believe I bought their debut single in a record shop when in holiday in Paris) I was captured by the sound of the band and the lyricism, on some songs critical and scathing, while on others dealing with their subjects sympathetically. Take the B-side of their debut single For the Dead – Child’s Body was misheard or misconstrued by many I spoke to at the time, but it is clearly a sympathetic take on cruel and debilitating eating disorders such as anorexia. Both tracks appear here on the compilation of early singles/B-sides and live tracks, To See the Lights. Much like The Smiths Hatful of Hollow, one of my most listened to Gene albums.

Listening back to all of these albums, you are reminded of just how prodigious the band were in terms of their song writing, so many memories and gobsmacking moments as I listened to all the albums in order of release. Every time a song came on it was like I was hearing it for the first time again and kept having those “I love this song” moments. There was a certain greatness in the song writing, and I don’t just mean that the songs were impressive and highly enjoyable. The tunes were aurally enormous; the band were tight creating a vast and boisterous muscular sound. This was in no way a fey, twee indie band, this was a band that meant business. Look at some of the veiled threats in the song titles – You’ll Never Walk Again, The Police Will Never Find You…

But that didn’t mean they couldn’t do the tender and emotionally affecting songs, often within the same track.  Take the title track from their debut album, still one of my favourite songs to this day. An epic track in its rises and falls, with its quiet, delicate moments, but the track, as its title suggests becoming a gloriously unbeatable behemoth. This triggered a thought. What are my favourite Gene songs?  I could go on to list them all here, but it would literally start to become a list of the songs appearing on all the albums and singles. As I said, as I was listening to these albums again, the little phrase, “I love this song” kept popping into my head.

Working my way through this back catalogue, I was taken back to so many places and times. Sick, Sober and Sorry reminding me of nights out, having the set of three badges displaying the three words in the song title, and switching them around on the lapel of my jacket depending on my mood or bodily state. If I take that song as another cue, this (not-quite) completists box set reminds you of the quality, not only of the band’s albums and singles, but of the B-sides, some of which could easily rank in my top ten of Gene’s songs. Live tracks reminding me of so many emotional nights witnessing the band in the live arena.

The other thing that struck me was the progression and maturity in the band’s sound, that immense soundscape overlaid by Rossiter’s distinct sonorous vocal ever present on tracks like singles Fighting Fit, but also seeing a more reflective matured side by the time they got to Libertine, presenting an atmospheric album that is a perfect example of late night listening including strings, Hammond organ, slide guitars and ventures into reggae.  While the final bonus disc sees the band sharing some unreleased tracks and demos, including an exquisite unreleased studio version of the track that gave their live album its name, Rising for Sunset.

Despite me owning the majority of the tracks on this box set, it is, for me, an essential release, a chance to revel in the glory of Gene, and listen to some tracks I haven’t heard in years with singles packed away in boxes in the loft somewhere. We Could Be Kings? No, you were Kings, commanding respect from all those who followed you. Long live the Kings.