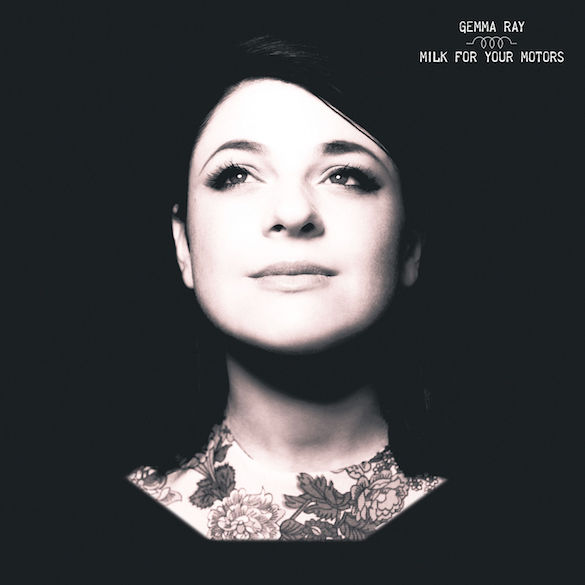 Captivating singer-songwriter and guitarist Gemma Ray returns with a stunning follow-up to her critically acclaimed and wonderfully inventive 2012 album, Island Fire, and her 2013 widescreen instrumental imaginary soundtrack mini album (which featured legendary Bad Seeds drummer Thomas Wydler) Down Baby Down. Ray’s new album, Milk For Your Motors, is another leap forward for an artist who, yet again, commendably avoids any flip classification. Dramatic, passionate, razor-sharp and enticing, Milk For Your Motors draws the listener in from the get-go until the grooves run out.

Thematically, all the songs on Milk And Motors would seem to either depict the commencement of relationships or their conclusion, while on occasion almost acting as the vessels of premonition for future events, such is the strength of Rays’ songwriting. The album starts with a the hard, mean, rock breaking blues ‘The Wheel’, which perhaps depicts the trials and tribulations required keep a relationship on course, while acknowledging that one day it will, for whatever reason, eventually end. The relentless grind of the main riff gives way to a beautiful piano interlude that brings some light into this foreboding blues. The mood lightens for the next three Ray compositions – the sexual, self proclaimed ‘volcano pop’ that is ‘Shake Baby Shake’, the jaunty Shadow Morton style bubblegum pop of ‘Buckle Up’ and the 50s guitar flavoured romantic reminiscences of ‘When I Kissed You’.

The highly propulsive ‘The Right Thing Did Me Wrong’ blends the exotic sounds of Les Baxter with 60s popular song, providing a glamorous backdrop for Ray’s cheerful lament. Side One of the album (yes, Milk For Your Motors is thankfully available as a vinyl LP) concludes with a heartfelt but hushed celebration of domesticity, featuring some gorgeous guitar work from Ray.

Side Two of Milk For Your Motors is an altogether darker affair, arguably the darkest songs Ray has yet recorded. ‘Desoto’ is a stunning essay of despondency, underpinned by Ray’s twanging guitar steadily building to an ominous piano outro. Wry black humour dominates Ray’s ‘Waving At Mirrors’, a sick tale of a fatal accident that could be read as a fabulous putdown of our narcissism-possessed society, which musically carries faint echoes of soulful gospel.

The tense and theatrical ‘Motorbike’ takes the Shangri-Las’ ‘The Leader Of The Pack’ on a trip to hell, with a vital cameo from Suicide’s front man, Alan Vega. The result is the best song Alan Vega and Martin Rev never wrote; the faultless intermingling of doomed girl group romantic pop and avant-garde ‘punk’. As with many of the other songs on Milk For Your Motors, the sweet fragility of Ray’s emotional vocal delivery compliments perfectly the hard-edged material she has written. And when Vega lets rip with a ‘Frankie Teardrop’-style scream a minute before the end of the song, an Evil Knievel lift-off is achieved.

‘Out In The Rain’ is a powerful ballad of rejection that would not have been out of place in The Doors songbook, while ‘Rubbing Out Your Name’ swells with sadness buttressed by a beautiful John Barry–style string arrangement. The record closes with a return to the light, with the redemptive strains of the joyful Velvets inflected ‘Old Love’.

Hopefully, Milk For Your Motors will propel the prodigiously talented Gemma Ray much further towards the wider audience her work so richly deserves. Her infectious blend of classic girl group pop, off the wall exotica, left field rock ‘n’ roll and vivid torch songs should be dominating the airwaves. If you haven’t heard Gemma Ray yet, Milk For Your Motors is the perfect introduction and if you are a devotee, this might well be her best album yet.

Ray is her own woman and only follows her own idiosyncratic artistic path, surely a cause for jubilation in these sterile, identikit, pop end of days.

Milk For Your Motors is out on Monday through iTunes, Rough Trade and Amazon.

Gemma Ray is on tour from August 23. Dates below.

Keep up to date in Gemma Ray via her website: gemmaray.tv/live. She can also be found on Facebook and she tweets as @gemmaraymusic.