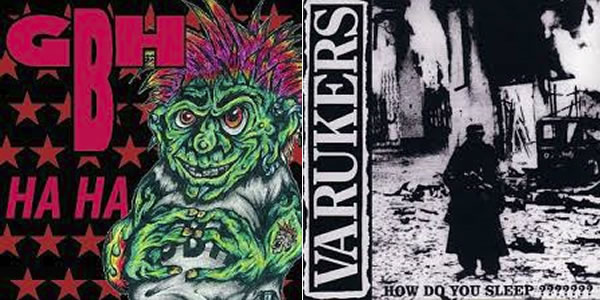 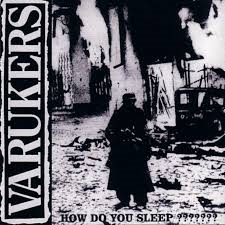 At the dawning of the new millennium the New York record company Go-Kart expanded their operations and in doing so signed up a load of “elder statesmen” UK Punk outfits to their roster. Of the higher profile bands both Conflict and Buzzcocks released new albums through their auspices and though not quite as headlining grabbing (well internet punk website headline grabbing) ’80s Punk journeymen GBH and the Varukers were also contracted to put down some new tracks with the view to release. 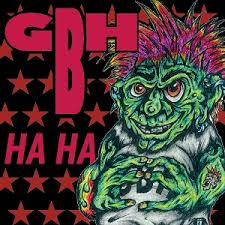 GBH have been a constant on the live scene since their formation in Brum way back in 1979, only lagging behind the UK Subs in terms of resilience. They have had an unchanged line up since 1994 and at the present time still contain three original members in Colin, Jock and Ross. Even in the hard times of the early 90s when literally no-one was interested, they still persisted onwards, but by the time of Ha Ha things had turned around and they were greeted with the appropriate level of respect, with well-received appearance at festivals.

This album is typical GBH but I don’t suppose any of their fans were expecting a concept LP with a full orchestra or an unexpected diversion into Trip Hop. They sound like GBH on here, not a Metal version of GBH or a UK82 version of GBH, just GBH. Fast and brutal with that level-headed and funny side to their lyrics that kept them from appearing po-faced and earnest. You always felt GBH were the Punks down at the bar, not tucked away from the unwashed hoards in a snazzy dressing room.

GBH always approached things with a (sick) sense of humour and on Ha Ha it is no different. Perhaps Sado Methodist is making a good point about how religions brutalise people, or perhaps it was just a good phrase that came to them at the time, it is unclear. There’s a little “Clash-style road story” about Punk Rock Ambulance and The Desire Of Poverty is actually a neat piece of song-writing, looking at why people ruins their lives (and those of others) through drug use and it refuses to take the easy option. Good stuff. GBH on this album sound totally at ease with who they are and what they do and as a result Ha Ha is a rather better record than many would expect.

For their part Leamington Spa’s very own Varukers formed around the same time as GBH but had a little downtime in the late 80s, reappearing at the end of the decade. They have been with us ever since, with singer Anthony “Rat” Martin leading the line (in between a brief time fronting hardcore Punk top dogs Discharge). Emerging two years before the GBH waxing, How Do You Sleep??????? could have easily been from their ’80s heyday, relentlessly fast Hardcore Punk with Metal undertones.

Though not overly burdened with anything frivolous like tunes, there is no doubting the commitment in their hell for studs ‘n’ leather approach and the sound is convincingly fierce. Gun Crazed Kids is a good one, being exciting and the lyrics look at the on-going self-inflicted dehumanisation and loss of sympathy for fellow folk rife in the modern age. Under Attack has some smart stop-start moves, the title track some cutting guitar and set closer Die  (they were always a cheerful bunch!) even packs in a bit of Glam Metal guitar into the cauldron. Overall this album shows a band doing what it is known for very well.

The problem with both these albums I suppose is while there is nothing intrinsically wrong with them (and parts of both LPs are really quite good), the songs recorded here by both GBH and the Varukers are unlikely to supplant say Give Me Fire or Die For Your Government in their respective live sets regardless of their quality. That is the conundrum for any reformed band and I’m jiggered to know a solution other than to keep striving to be better than your past, not just to match it (or worse, mimic it).

But the other side of that particular coin I suppose is that you have to admire both bands hanging in there and for wanting to record new stuff when they could easily just rest on their laurels and bang out the old material for the readies. Rabid fans (no not of the 80s HC band!) will want these if they do not already possess them and given a listen these albums might appeal to waverers as well. Punk Rock’s angry old men continue onwards in any case!