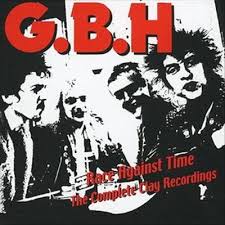 Two compilations from Birmingham Hardcore Punk outfit (Charged) GBH whose titles speak for themselves…LTW’s Ian Canty has Leather, Bristles and Studs but the Acne has now cleared up….

I’ve always had a bit of a soft spot for Charged GBH (do we still have to put “Charged” in front these days?). I can remember back in 1982 when I purchased their first album “City Baby Attacked By Rats”, then it seemed to me that they were the state of the art when it came to Hardcore Punk of the time. I admit that I was a little naïve then and almost totally unaware of the US bands that had equal or even more claim to that title, but in my little world at least they were the last word in both speed and noise. Though their Clay label-mates Discharge had stolen a march on them to set the wheels in motion for UK hardcore, I have to say I preferred the totally Un-PC (anyone for the “Bell-end Bop?), more humourous lyrical approach of GBH (of course Discharge were concentrating almost totally on an anti-war message at the time) and although most of what they did fell into the thrash Punk mode seemed to possess a little more musical invention within that format.

Forming in 1979, GBH really began to make an impression when they signed to (former manager of the Lurkers) Mike Stone’s Clay record label for the “Leather, Bristles, Studs and Acne” EP in 1981. For the period that both these collections document, GBH were one of the more successful Punk bands in the UK and when their debut LP crashed into the Top Twenty of the album charts they were as big as anyone of the same ilk. After the highpoint of what is now termed “UK82” for some reason, the scene fell to pieces, but to their great credit GBH did not change musical tack but stuck to following their original vision, with only a slight detour in a Thrash Metal direction (a scene where they were a key influence). Apart from going through a number of drummers, the line up has stayed intact to the present day and have continued to record and tour.

The first selection that we have here is a straightforward one disc collection of all the band’s single tracks over their prime period in the early 80s. Bluntly, this is made up of the “Leather, Bristles….” 12″ and the “No Survivors”, “Sick Boy”, “Give Me Fire”, “Catch 23”, “Do What You Want To” 7″ inch singles. All of which adds up to a great starter kit for the band and the one the less committed should go for. Despite the hard and heavy image, they could weld their super-fast schtick to some decent tunes along the way. “No Survivors” and “Give Me Fire” both hit the lower end of the national charts and the later also saw the band featuring on TV show “The Tube” playing the song at a rooftop location, as Mr “Boogie Woogie” Jools Holland looked on (thankfully he didn’t try to join in). Presented in a digi-pack, this comp puzzling doesn’t give any band history but it does have all the song-words, ideal of course for the outside chance that one will be invited to a GBH karaoke evening. But seriously, if you know nothing about this band and are interested enough to want to find out more about how they sound at least, this is as good a place as any to begin.

Now we move onto the second (also self-explanatorily titled) GBH release which consists of the entire shee-bang they recorded during their time on Stoke-On-Trent’s Clay label. Which means it contains all the singles mentioned above and the two LPs “City Baby Attacked By Rats” and the decent follow up “City Baby’s Revenge”. The main carrot here for the faithful is a good sound quality 14 song live set on disc three, which I presume was recorded around the time of the second album (this live selection includes a couple from the aforementioned second album on its set-list and Colin mentions “Hellhole” as being their next single, so although but unfortunately there is no actual information of date and location in the sleeve note it is fairly safe to say it comes from 1983). Sound-wise the guitar is a bit down the mix in this live selection, with the bass and drums dominating, but the vocals are very clear and overall it’s a pretty entertaining show with the band obviously on form. The booklet which accompanies features a potted history of the band written by Ian Glasper of “Britain’s Burning” fame. For anyone looking for a concise summing up of GBH’s most successful period it is all here.

Though obviously not for everyone, in their own modest way GBH carved out a unique niche for themselves – at the time of these recordings they put out some convincingly fierce, noisy, high energy Rock n Roll and seemed to have conducted themselves through their travails as thoroughly decent gents as well. For all that, more power to their collective whatnots.