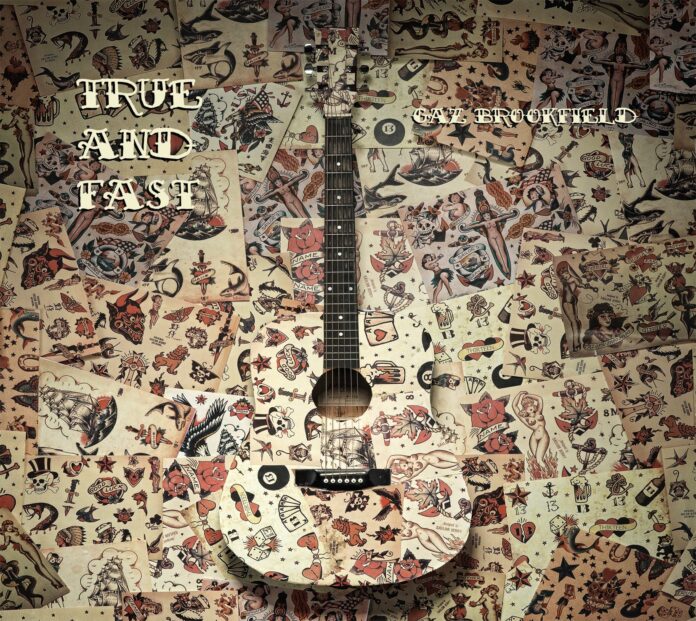 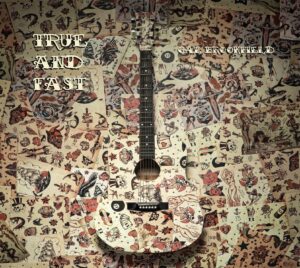 Acoustic Troubadour Gaz Brookfield is back with his fourth studio album. In True And Fast Brookfield treats us to a collection of personal observations on life, love, politics, religion and the music industry.  As usual Brookfield lays himself bare for all to see and Alan Ewart was happy to take a look for Louder Than War.

Gaz Brookfield is one of the hardest working men in the music business.  It is far from unusual to see Brookfield perform 200 or more shows a year as he hauls himself up and down the highways and byways of our green and pleasant land in a never ending struggle to make a living from what can only be described as broken music industry.

Brookfield has built a loyal following, I have yet to meet someone who, having heard him play, hasn’t instantly become a fan.  You can’t help but like a man who works so hard at his art and who is prepared to allow you to look so deeply into his psyche through the medium of his songs.  As someone who has seen Brookfield perform on numerous occasions I was already familiar with some of the tracks on the album, something that in my view makes a review more difficult.

Brookfield’s strength as a songwriter is his ability to take seemingly banal observations on everyday life and turn them into a song.  On True and Fast Gaz tells us about his ongoing struggles with his not so trusty old van Ozzy, so called because it’s “always fucked.”  In typical Brookfield style the seemingly superficial hides a deeper truth as Gaz tells Ozzy, “you mend me when I mend you.”  Followers of Brookfield’s music will know that he has struggled with depression and his life on the road is both cause and cure.

Gaz’s constant touring is a recurrent theme in his songs and he hints at a desire to put down more permanent roots in “Sailor Jerry’s Kitchen” and in the album closer “Cornish Fishing Town.”  The theme is unsurprising for a man who is shortly to marry and yet Brookfield admits that his ideal home would have a “festival back garden” complete with a stage and a fire-pit.

In both “Just A Ride” and “Godless Man”  Gaz contemplates his own mortality and his struggles with religion, not an easy subject for someone brought up in a religious family.  Diabetes Blues reveals Brookfield struggles in coming to terms with the condition, especially given that cider is now off the menu.

Throughout the piece Gaz remains honest, self deprecating and humorous, though he is not above an acerbic side swipe at the government and the music industry.  Solo Acoustic Guy may seem like a bit of self-deprecating humour but it also lays open the injustice of promoters and festival organisers who expect musicians to play for free or for “exposure.”

Brookfield demonstrates his fierce independence throughout the album.  With the exception of the banjo and steel guitar on “Mud and Rainbows” and fiddle parts by long time friend and collaborator Ben Wain, Gaz plays all the instruments himself.  In my view Brookfield is underrated as a guitarist, his ability to mix styles seamlessly is an art and he is extremely proficient at doing so.

True And Fast contains half a dozen tracks that are the equal of anything that Brookfield has produced in the past and both Knights of the Round Table and Cornish Fishing Town are amongst his very best work.  The album is a grower, repeated listens reward us by revealing the hidden subtleties in the songs.

What I find most appealing in all of Brookfield’s work is that he delivers a sometimes damning social commentary, always honestly, often painfully but always in a way that offers hope for the future.  There is a resounding positivity in his work. This is amply illustrated in Diabetes Blues when he sings “so from cider I’ll abstain, i’ll do my best not to complain, and after all there is always single malt.”

True And Fast is a fine offering from Brookfield, another gem of an album from a man whose enthusiasm, hard work and gifted songwriting deserves every success.

Gaz has also released a live album recorded at the album launch of True And Fast.  The 19 track live album contains songs from the album and a collection of Gaz’s best loved songs.

Gaz Brookfield is on the internet here:  Gaz is on Facebook and Tweets as @Gazbrookfield.

True And Fast and Gaz Brookfield’s back catalogue are available from bandcamp and the usual download outlets.

Words by Alan Ewart. You can follow Alan on Twitter at @soundofmysummer or on the internet at soundofsummer.org and you can read more posts by Alan at his Louder Than War author’s archive.