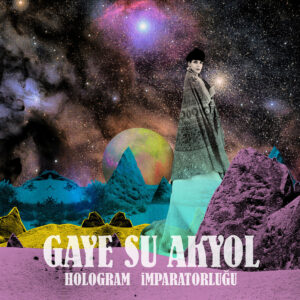 The opening track ‘Hologram’ blasts you in the face with some really vintage sounding Eastern strings fresh out of Steve Reich’s nightmares of him playing in a metal band or something…it’s intense in places and really takes you by surprise. It slowly and subtly transitions into a belly dancing frenzy of immense drumming, crazy time signatures and bursts with energy and sounds almost Jewish at times.

‘Akil olmayinca’ is very reminiscent of Ennio Morricone with it’s almost cowboy-themed melodies and strong male backing vocals juxtaposed against Gaye Su’s haunting and rich vocals. It’s a real boiling pot of East meets West, sensually blended together with a trumpet. It traverses beautifully into ‘Kendimin efendisiyim ben’ not letting up on the Morricone theme but this time adding elements of Tango surf guitar and even little touches of Plone in a strange non-synthlike way to this short and sweet little tune.

I love it when instruments all play the same riff and then it all turns into Ozric Tentacles like ‘Fantastiktir bahti yarimin’ does, swimming back to the swirling and accomplished vocal trickery we’ve been hearing colouring this already enchanting and almost space-rock album.

‘Kendimden kaçmaktan’ has an almost Dick Dale vibe to it with the flamboyant electric guitars blasting out those Phrygian scales and Gaye’s vocals floating all over the top make it exciting and fresh to listen to. ‘Dünya kaleska’ is no exception and without the vocals you would be forgiven for thinking this is an album by some new new-wave American garage band it’s that confusing (in a great way).

‘Eski tüfek’ has an almost Math-Rock edge to it at the start which got me bopping like crazy thinking of Nusrat Fateh Ali Khan with a tremolo-driven, reverberated vintage Gibson. It really goes for it towards the end and reminded me a lot of the 60’s psychedelic space-rock being done by bands like Pink Floyd and Groundhogs.

‘Uzat saçini Istanbul’ has some beautiful melodies, stunning singing and a tone that just draws you in. Nothing about this album is too overbearing and it’s a really interesting listen, especially with that heavily riff driven guitar running up and down the tracks. It even reminds me a bit of Patrick Watson if he were on a trip to Turkey intentionally writing Eastern infused tunes. Wonderful stuff. We get back into those belly dancing rhythms on ‘Nargile’ with an added male vocal singing in unison giving a nice thick, rich vibe to it. Oh and those strings…yummy stuff indeed!

By the time I reach ‘Anlasana sana aşiğim’ I’m starting to hear lots of similarities which isn’t a bad thing and through ‘Mona Lisa’ and ‘Berduş’ I’m still tapping my toes and enjoying it but I would have probably made the album a couple of tracks shorter if not to just have something that made an impact and then left you wanting more. Saying all that though, this is an album full of charm with a curious fusion of styles all blended together to create an engaging, exciting and cool album that I would return to again without hesitation. The production is first class.