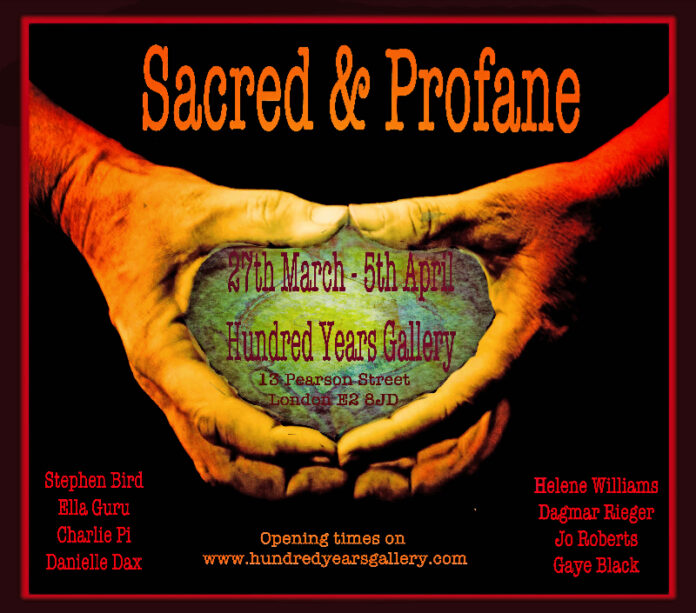 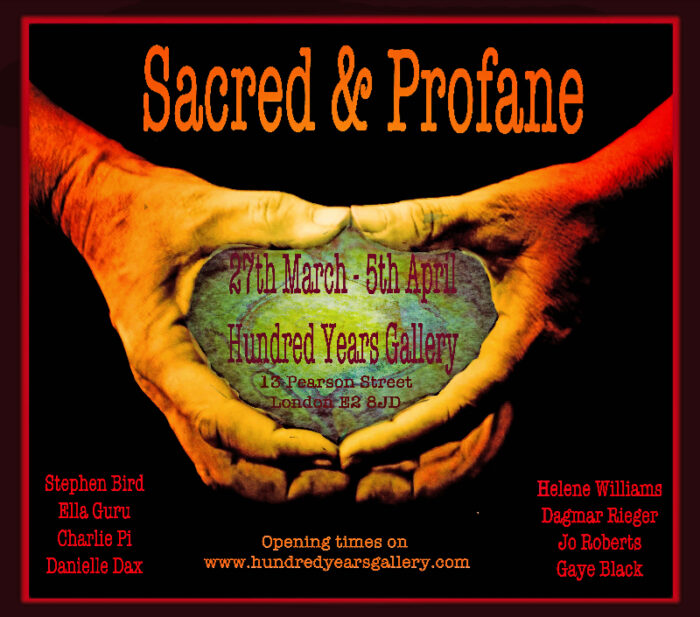 More details about the event from here.

An exhibition featuring an exciting gathering of artists to celebrate the arrival of spring. They are bringing together a variety of stimulating, original work to create a vibrant, elemental environment. This is sensual work, using wild, primeval, multicultural and pagan elements to celebrate the power of nature and of the imagination.

These artists boldly examine life, death, sex, religion and transgression. A mirror is held up to our culture’s taboos, in terms of what is acceptable to represent, to reject, and to use. The work at the exhibition shall be a combination of sculpture, painting, illustration, film, collage and assemblage.

These artists share a common vision. They are aiming to convey the divine aspect of human nature, and it’s dark twin: our animal desires and instincts. Ever since the dawn of human history, we have been making images of supernatural beings and holy creatures. Our oldest surviving images represent urgent ideas about nature, primal urges and the supernatural. As human society has “progressed”, it is worth contemplating that religious HELENE WILLIAMS CHARLIE PI (667×1024)icons still represent some of the most beautiful aesthetic expressions in our various cultures, whether we choose to worship at them or not. Regrettably, lives are still being lost, and wars fought over such icons, and for the right to create and display such religious images, so we should ponder what they represent politically and culturally.

The exhibited work shall be supplemented with sessions of performance and music from Jowe Head & The Demi-Monde, Helene Williams, The Rude Mechanicals, Bird Radio, Rotten Bliss, and Sexton Ming. (See full schedule at the bottom of the page)

Opening on 27th of March from 6.30 : ‘A Shamanic Street Ritual’ a performance by Mark Fuller and Helene Williams. (Mark Fuller, blacksmith and performance artist. His most recent performances have been in East Anglia where he presently resides. SNAP Aldeburgh Festival in 2013: Milk & Music performance with Sarah Lucas and at Whitstable Biennalle 2014: Milking the Coast with Helene Williams )

2nd April: First Thursday open until late 6.30 to 9.30: Cos Chapman and friends. The eccentric professor returns! The guitar boffin at the heart of Rude Mechanicalspresents live improvisation, with prepared guitar and electronics.

Helene Williams, based in Kent, is an accomplished, innovative sculptor who works in fabrics, plaster, ceramics and found objects. She is also a performance artist, and has performed some memorable ritual-based pieces in the Whitstable area

Jo Roberts, whose practice embraces paintings, illustrations and mixed media work. She has recently completed a period as an Artist in Residence in Berlin. She also has an excellent reputation from performing as a solo artist and in her amazing band Rude Mechanicals.

Gaye Black spent three years at art college, qualifying as a graphic designer, before becoming bass player with punk band The Adverts. Since then, she has been exhibiting regularly in the UK, and shown her work in Germany and the USA. She has also curated three exhibitions. Her work uses assemblages of found objects, including organic detritus, often collaged with paint, photos and jewellery, and often encased in resin.

Danielle Dax, the unique musician/performer, produces visionary paintings and kinetic 3-dimensional work. Dax was born in Southend-on-Sea, Essex and spent the majority of her early childhood with her grandparents who encouraged her love of art, nature and the occult. She appeared in two films – Neil Jordan’s – ‘The Company Of Wolves’ and ‘The Chimera’ and was regularly performing with dancers/performers, body paint, hand-painted sets, costumes and the films of Holly Warburton’.