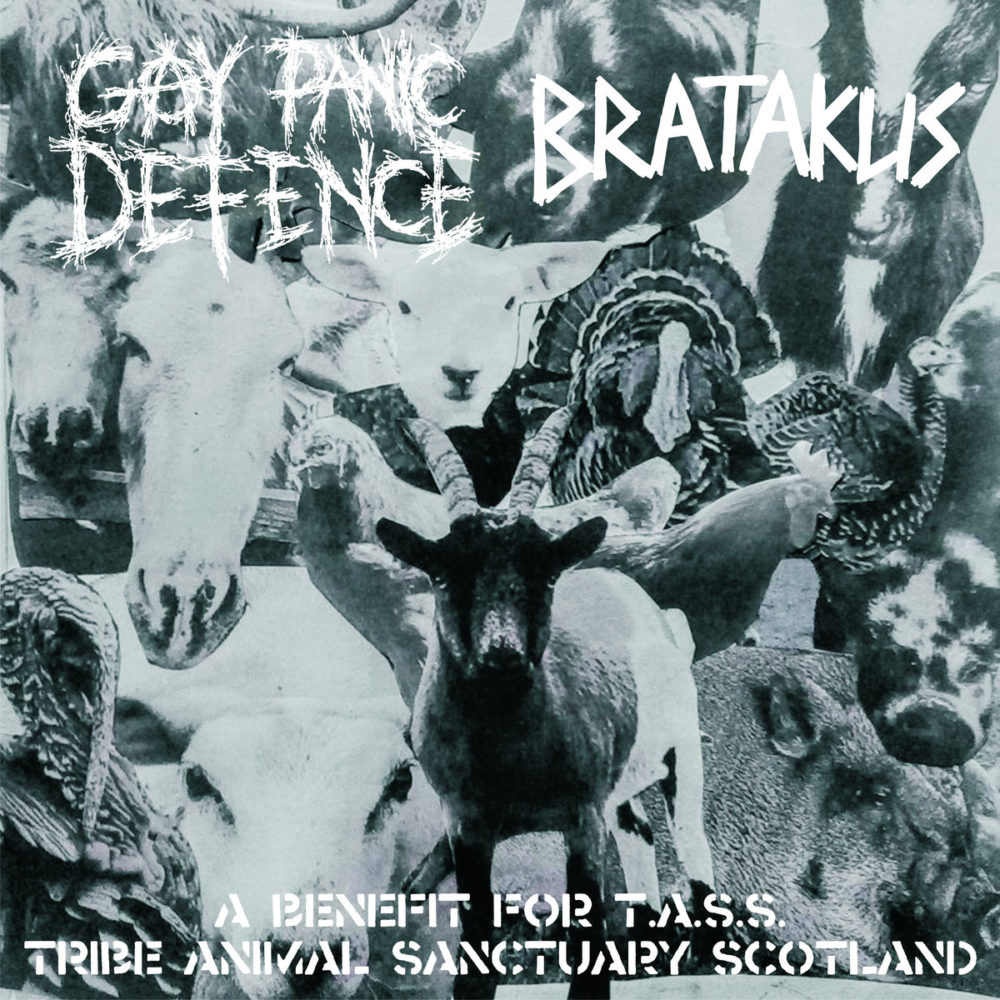 Two Scots vegan punk bands thrashing for the animals prove there is politics in the new generation of punk.

Out of all the hardcore punk releases, why should you bother with this one?

1. What you pay for this EP will go towards a Scottish animal rescue sanctuary (Tribe Animal Sanctuary Scotland). I’m sure LTW head honcho, John Robb will join me in saying that this is reason enough.
2. This release is proof positive of the new generation of political punk bands – see recent LTW blog from Milly Whyles.
3. It sounds great.
4. It’s a great example of the DIY aesthetic done well.
5. It’s only a fiver, you tight-arse.  See 1.

So that’s the key points of the review out the way; let me backfill a little. BTW, it’s mere coincidence that I write this review in Veganuary and in the wake of the Greggs Vegan Sausage Roll media boom.

Gay Panic Defence are a fast, furious shouty racket. Somewhat elusive – I think there are three of them, but I may be wrong. They play a mash-up of chunky hardcore and blast beats with a splash (or should that be slash?) of metal with guttural vocals. There will be better comparisons, but as I’m out of the loop on this stuff (and a little lazy), I’ll say think Drop Dead meets Active Minds and Citizens Arrest. Short and as sweet as toothache, two of their five songs nearly make it to the one minute mark. They punctuate songs about sexuality and animal rights with a few well-placed samples, and open the CD with their interpretation of Bratakus’ I Know Nothing.

The band name, in case you were wondering, refers to the phenomenon of people who have attacked gay or transgender people using “gay panic” as a defence strategy when facing prosecution. From what I have read, it’s along the lines of, “I was afraid they wanted to have sex with me, so I had to attack them rather than say no thanks.” Amazingly, this can even result in reduced sentencing, as if being homophobic is some form of diminished responsibilty or temporary insanity, rather than a form of hate.

There was a time when most punks agreed that our music should be “loud, political and uncompromising,” which is how I would choose to describe Bratakus. Of course, we now have far too many old farts complaining that there is “too much politics” in punk. Bollocks to them! I’ve written about vegan riot grrrls, Bratakus for LTW in the past and for a fair few people. I know their LP was a high point of 2017. Alongside a Gay Panic Defence cover (We Are All Scum), the title of It’s Not A Real Phobia gives a fair clue as to the subject matter.

The final of the three Bratakus songs on this eight-title CD, There’s No Difference, was written and sung by the sisters’ nine-year-old brother, Darragh. Somewhat high-pitched – remember this is a nine-year-old – they still keep up the tempo, so I say fair play. The lyrics are better than you might expect. The roles of humans and animals are switched, with humans in zoos, humans hunted by foxes, and insightfully the song ends with, “You think this is a joke, but that’s the lie you tell yourself. This is really happening in the role-reversal. There’s no difference”.

Like the debut Bratakus CD, the wraparound packaging folds out into an A4 double-sided sheet. One side features information about some of the animals at the sanctuary (farmed animals such as turkeys, cows, hens, pigs and sheep rather than “pet” animals). The other side forms the front and back cover, plus lyrics for each of the songs.

Get the download from Bratakus or Gay Panic Defence

If you don’t want the music you could always just chuck some money at Tribe Animal Sanctuary Scotland directly or find out what’s happening down on the farm on Facebook.