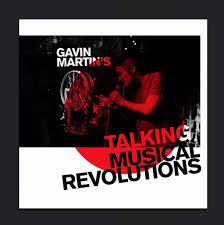 End Of The Trail Records

After a long career detailing Rock ‘n’ Roll in all it’s fetid glory Gavin Martin has taken the unusual step to move out to stage front and release his own music, with Talking Musical Revolutions being his debut album. Most writers would probably just put out a written compendium of their “greatest hits”, but this is something much more interesting.

Starting out with trailblazing Punk fanzine Alternative Ulster (founded with Dave McCullough who went onto write some of the first pieces about the Smiths and many others in Sounds) in 1977, he wrote for the NME in it’s Post-Punk heyday. From there he has established himself as the Daily Mirror’s music critic and written for many periodicals like Uncut and the Independent. Over that time he’s seen the good, bad and great come and go and some of it is documented here.

As might be expected from someone who has earned their living through writing for over 30 years, Martin draws some vividly detailed pictures through his compositions here. Heroes are saluted and villains are given exactly what they deserve. Words come in torrents and being skilled at these things, images are clearly evoked in the mind. The pieces on this album are like chapters in a book – incredibly detailed, knowing and never deviating from the prime aspect of telling the story how it was.

All this is backed by sympathetic and apt music. The single that preceded this record, The Pistols Of Sex does a fine job of demonstrating how important that band became to the people in the provinces after their briefly fashion-based clique in London had disappeared “In Bangor, Bethnal Green and Bristol came the shots of the Sex Pistol”. The prose is not backed but some rent-a-punk by numbers music, but by a driving and explosive Post Punk sound, giving it an edge.

On Thatcher And Savile, Martin skilfully picks apart the establishment that let that particular monster roam this country like he owned it, his appalling crimes brushed under the carpet by his friends at the centre of the black heart pumping through the corridors of power. This track is powerful and filled with righteous anger at the people that were supposed to be making sure justice was done etc instead manipulated the system to see it wasn’t. They made others suffer appallingly, so “one “of their own” could live so brazenly and horrifically and they still have not answered for this. Martin takes them to pieces here. My Daddy Went To Belsen is the heart-rendering story of Martin’s late father’s harrow experience at the Nazi death camp after war had ended. The appalling crimes that man does to his fellow man are a clear theme here.

Probably my two favourite tracks on this album though are The Revolutionary and Long Hard Road To be Free (For Marvin). The first of these deals with Ulster’s own Blues Rock hero Rory Gallagher and clearly shows what an important force he was for freedom in Northern Ireland during those troubled times. You can feel the real passion that Martin clearly has for the man, it’s touching and affecting even to someone with only a sketchy knowledge of Gallagher’s work. More than just a musician, Rory became a totem for the youth there, but there was also a man behind that with his own problems. It’s a work of art this, the Gospel style backing music working in tandem with the words to great effect.

Equally as moving is Long Hard Road…. which skilfully takes us through the sad saga of the downfall of one of Motown’s finest sons, Marvin Gaye. Not pulling any punches about the man’s addictions or shortcomings, Martin takes us to the heart of a tortured artist right up to the sorrowful ending. This is set to the kind of slow pace Soul strut that Gaye himself often favoured.

Gavin Martin has come up with a debut album that is set apart from most of modern music, not that it sounds dated, just out of the ordinary. There’s no easy comparison as we’re not talking about Sleaford Mods’ style potty-mouthed ranting or anything like that. It did kind of set in my mind a passing similarity to the albums that John Betjeman recorded for Virgin in the 70s – Banana Blush and Late Flowering Love – in that the voice and music were separate but perfectly complimented each other. Anyway for now Talking Musical Revolutions works as a social history of popular music, a fine piece of music-meets-poetry and prime example on how to draw a poignant picture with words – a very skilful accomplishment altogether.