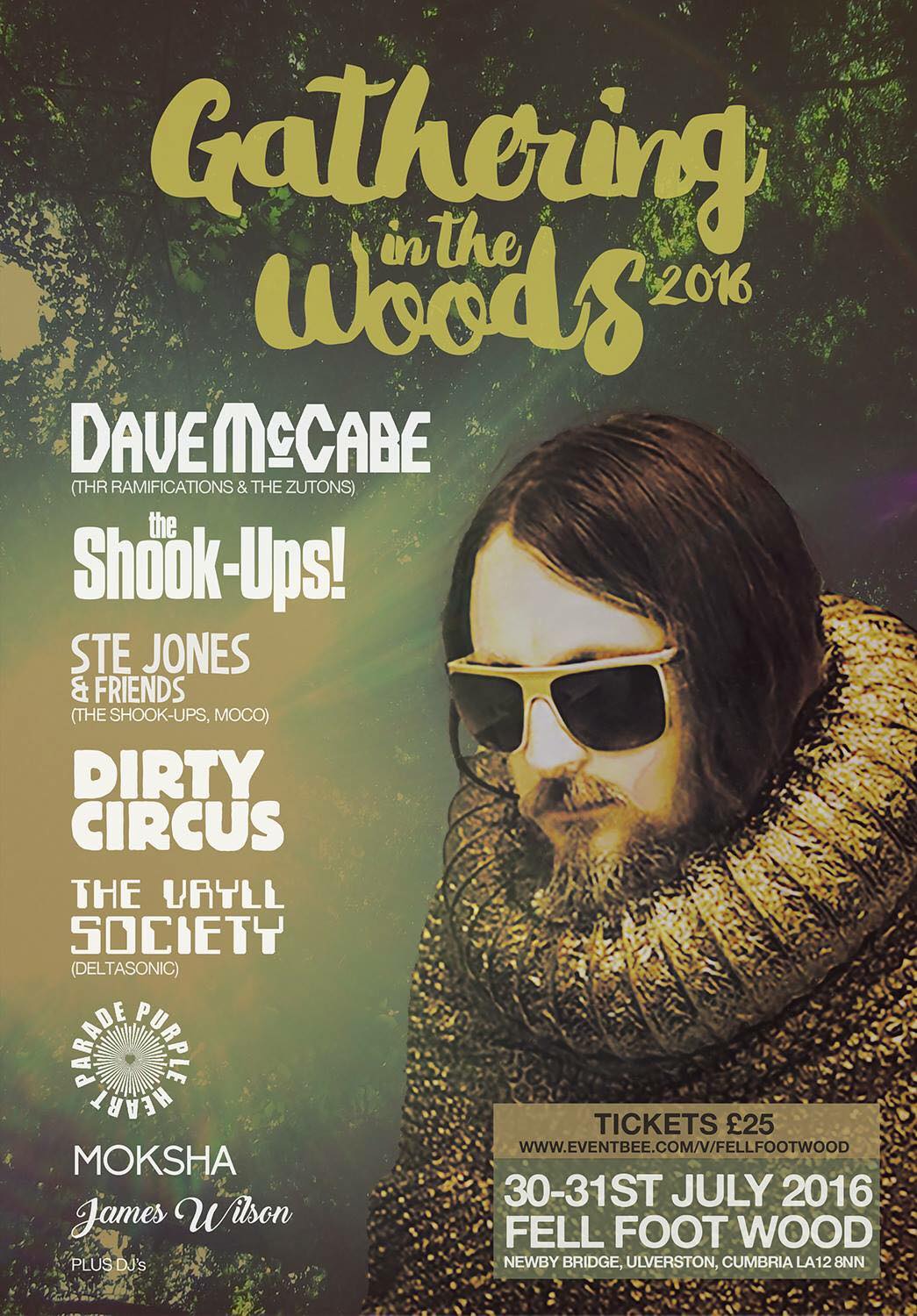 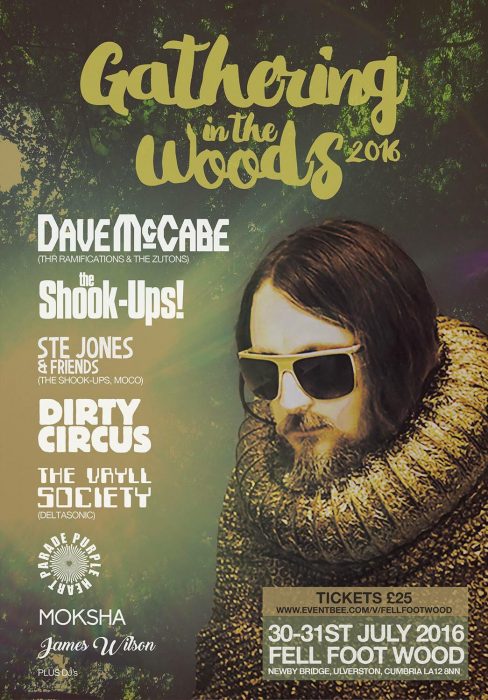 Gathering in the Woods festival is a showcase of Wigan’s best music set in the heart of the Lake District, taking place this Saturday July 3oth 2016. Now in its 3rd year, launched by Tony Wilkinson and Dylan Harris (Lupine).

Check out this intimate little festival, (only 150 tickets) set in the beautiful setting of Fell Foot Wood in the Lake District, featuring some great bands, only £25 including camping and you can bring your own food and drink. However if you prefer you can sample the delicious fresh cooking on site (with Vegetarian options) plus a well stocked bar. For those wanting some chilled out treatments they have a massage company on site offering Indian head massage, Thai massage, head neck and shoulder massage, reflexology.

The festival aims to not only bring together the best of what Wigan has to offer, but includes some well known artists, the big coup this year being former lead singer with The Zutons Dave McCabe,  joined by the highly tipped Vryll Society and Manchester’s Purple Heart Parade. Wigan’s acts include Dirty Circus, Moksha, James Wilson, Ste Jones and friends and the Shook Ups, returning after their raucous headline slot last year.

Dave Mcabe: Former lead singer in the Zutons who had a huge success in the mid 2000’s with their 3 albums and various hit singles including Valerie, Pressure Point, You Will You Won’t and many more. Dave McCabe is now back with a new band, The Ramifications. In contrast to the guitar based sound of the Zutons, his new solo material takes inspiration from the likes of Kraftwerk and Depeche Mode.

The Vyryll Society: They have been locked away in their subterranean rehearsal space for more than a year, creating a complex body of work, to stimulate both the soul and mind. Long days of liquid jams and crafted song writing, laced with touches of Funkadelic, Aphrodites Child and Krautrock has seen a rich ocean of sound come to the surface. Signed to Deltasonic Records.

Purple Heart Parade: Manchester’s burgeoning post-industrial bubble was the starry embryonic sac for PURPLE HEART PARADE to spawn their shoegaze fantasies, with Louder Than War dubbing them “a band destined for the stars” and The NME professing admiration for their “squalid feedback”, whilst publications such as “Metro” and broadcasters like the BBC have all been purring at the Mancunian cosmic waves.

The band’s performances have seen them gain interest from highly esteemed peers, with noted admirers of the band including the likes of Nick McCabe, Mark Gardener, Simone Butler and Sean Lennon to name but a few.

The band return to the festival after their triumphant headline slot last year. Lead singer Stephen Jones will also perform a separate set, billed as “Ste Jones and friends”. He is due to move to Valencia shortly after the festival so this could be your last ever chance to see The Shook Ups.

Dirty Circus: They were loud, confident & aggressive and made a seismic mark on the Northwest music scene a decade ago. Now they’re back with their big, hard-hitting electro-indie tunes with attitude that ruffles feathers wherever they go. Their recent comeback gig earlier this year was a triumphant return to a packed out Old Courts venue in Wigan.

Moshka: Instrumental five piece Moksha are fresh out of the studio after recording their first EP together. Their psychedelic sound brings together a wide range of influences from post rock acts such as Mogwai and Explosions In The Sky. Layer laden and rich in texture their music is sure to create the perfect portal to the Fell Foot Festival experience.

James Wilson: Previously of Monsta (One Little Indian) and Victorian Dad (Skinny Dog), James is now a solo instrumentalist fusing elements of blues, classical, folk and percussion. James has toured extensively throughout the UK and through the help of writer, producer and organic agriculturor Jon Bonfiglio, was also a regular fixture at Kuiperfest, an eco arts festival set in the foothills of the Mattarana in Northern Spain.

Tickets are priced at £25 and available until Friday here:
Check out the site here: https://www.fellfootwood.co.uk
Facebook group for more info here:

Well, what are you waiting for, you only have till Friday to get your tickets for this festival, hurry its going to sell out fast.