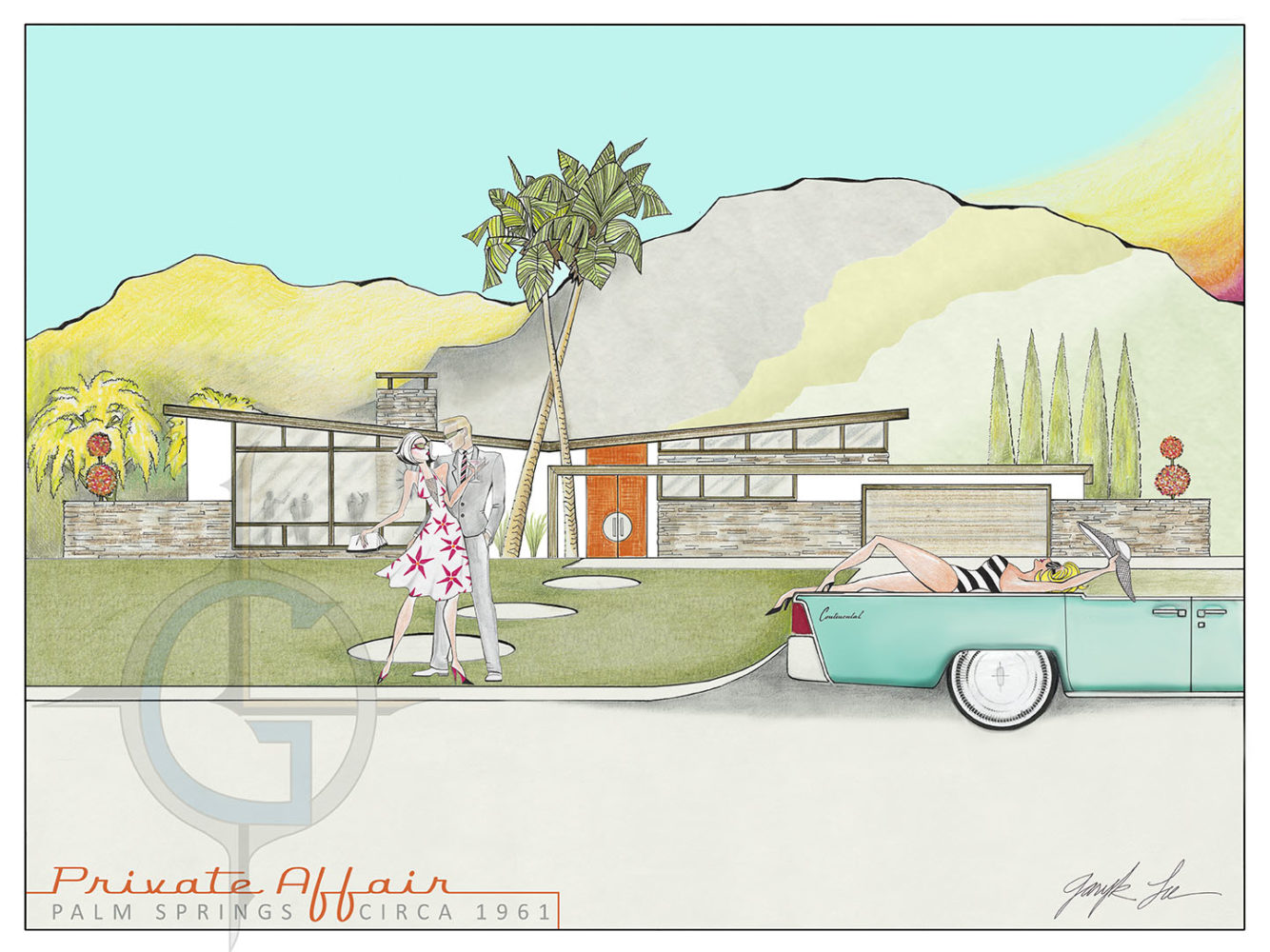 Talented and unique artist, fashion mogul, producer, and creative master, Garyk Lee is about to launch his new expressions globally. Well thought out, whimsical pastel impressions of Palm Springs, his home base, already fill the galleries and exclusive gift shops in the area.  Garyk Lee is a well-established artist as well as a huge fashion and designing influence. 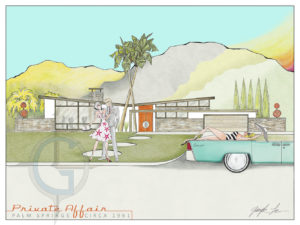 Garyk Lee is a multi-dimensional character and personality. He has the capability of putting his heart and soul into several projects at a time and doing them all well. Somehow, he is complicated within his talents, yet patient enough to be understood clearly. He combines his love for architecture and fashion to create some of the most impressive art of today, and simultaneously creates concept fashion designs and even a television series in pre-production.

I had an intimate and candid conversation with Garyk Lee, and couldn’t resist sharing some excerpts from our heart to heart. ..

Louder Than War: Garyk, where are you originally from?

I grew up in a little oil town in Oklahoma, with about 30,000 people. It was the corporate office for Conoco Oil Company and housed a large refinery. My dad was an engineer which was his first job out of college. We ended up in this little town, and he just did really well. So I was there all my growing up years until I was done with college and then I said I just couldn’t stay there anymore. I was not a typical Oklahoman, according to what my interests were. Recently it’s so funny, there were several girls that I really liked in my high school. There was only one high school, and three or four of the girls that I really liked ended up coming to Palm Springs.

I love your artwork to death…I want one with a New York influence.

I want to start doing different areas of the country and representing the architecture of that area. For New York I already have an invasion, appearing in the windows of the apartment buildings. It’s very perspective peering down into the windows where you could really see the life that’s going on. Then around the building parameter, down on the life on the street, focusing on the apartment and lofts. I plan on starting that soon. In the Northwest, I want to capture that craftsman architecture…

How about South Beach?

That would be really fun. It’s time to start doing this. I always work backwards, but I have a show coming up in October over here for modernism, which has become so popular.

When did you realize that you could draw or paint?

When I was three years old. Of course you know growing up in Oklahoma in the Bible belt meant that I sat on a pew on Sunday mornings in church and to entertain myself I would draw. So I was just constantly drawing. When I was in kindergarten the teacher called my parents up to class because I had drawn a house and the corral and a red barn. The house was up on a hill and she thought my parents drew it for me. She said that she didn’t know of a five-year-old who could draw in perspective. So they started realizing that I had an eye and knew what I was doing. So they always let me just draw. My father would bring stacks of printed paper from the office and I would just draw on all of the backsides. I still have a lot of those old drawings. My brother was the athlete and he would throw a ball with my dad and I would sit in the house drawing.

So you grew up drawing and….

The thing is I always loved fashion. I was always drawing fashion. From the time I started drawing until  the time I was ten that’s all I ever drew. Then when I was 10 years old my parents took me to the World’s Fair in Montreal and I was in awe with the architecture. It just blew me away. That building Habitat 67 was built for the World’s Fair. It was cubism apartments that were stacked on top of each other. It was like 27 stories high but it was pretty wide. They were just cubes stacked randomly, and it was really this unconventional building that was exhibited at the World’s Fair. It’s now a historic site of condominiums. That intrigued me so much that when I got home from that trip that summer, I was just drawing and designing buildings. I always wanted to be a fashion designer but although I love fashion at about 12 years old I stopped doing fashion because telling people that I wanted to be a dress designer wasn’t going over too well.

What was it like growing up gay in a small town in Oklahoma?

I didn’t even know I was gay. Especially back then when no one talked about it. I would get bullied to some degree because I was different, but I had friends. I really didn’t come out until I was out of college at about 24, when I moved to LA. I majored in architecture but I didn’t like the engineering part. It just wasn’t for me, but I loved the drawing. I ended up really doing fashion as my career for most of my adult life.

So you did do fashion?

Yeah… I really started in Oklahoma City designing for myself. I had a label and I was doing one of a kind designs. I could see that people were liking what I did. I got myself on a lot of local talk shows. After two years of that I ended up moving to Los Angeles. I kind of got into modeling and dancing and tried to see if I could dabble in acting. Then my parents left Oklahoma and we’re living in Saudi Arabia…. my mom got pretty bored with that because it was very difficult for women so she ended up coming to Los Angeles. I was designing for a little sportswear company and she saw the potential and helped me open up my couture salon on Robertson Boulevard. I was there for about five years and then moved to New York thinking that I really belonged in New York City. It was tough.

What did you call it, your couture?

It was Garyk Lee, just my name. It was really a great experience I did some really neat runway shows. Then I ended up back in Palm Springs. I wanted to do a retrospective video of my many years in fashion…So I created a pretend muse, that I didn’t know was watching over me all these years. So, she comes to me and surprises me and she’s my muse. She kind of takes me on this trip of my career. I love putting humor into fashion or art. A woman who I had worked with before had recently contacted me about doing some comfortable sexy lounge wear. So, I blew her away with my designs, but I can actually take these fashion characters that I created for the lounge wear and draw them into art pictures. So, for the website I’m going to animate three models and they are going to be different sizes.   I created a New York style loft but it will be in Los Angeles. That’s the interior so I can have a runway and a lounge for people to hang out, so when you go to the website you feel like you’re going to a cool lounge.  I’ve got the garments designed as well so hopefully with-in the year we will announce our launch.

My whole life everyone said that you had to focus on just one area. And I thought that to be very boring. So about 4 or 5 years ago I started creating a concept for a television show out here, because I met all many very talented actors, daytime drama stars. So now we’re pretty far along, we’ve got a film trailer, and then I partnered with writer who created the 80’s success, Max Headroom. I worked with him before and he has done such a creative job on this show. We have the pilot script. I’m building the website for that which will go out to the potential investors.  It’s very timely with what’s going on today. As it progresses I will announce more about it.

You really are a creative soul. We will revisit that TV concept shortly. In the meantime, I love your name…who has that name? It’s like the best name on the planet.

Growing up with the name Gary Lee Johnson I knew no one would buy clothes from someone with that name. So I dropped the Johnson and added the “K”, and that’s been my name forever.

Check out https://www.garyklee.com  for up to date information on his career as a world renown creator.