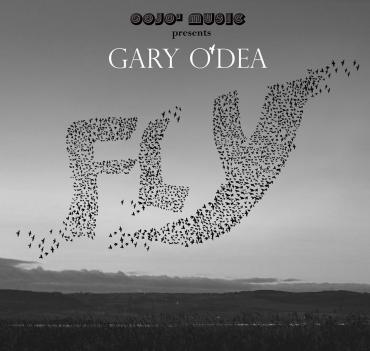 For someone who’s been on the music scene since the 1980’s, Gary O’Dea remains an artist comfortably ensconced  in the warm cocoon which is the West Midlands music scene.  He’s one of those jobbing musicians  who occasionally pops his head above the trenches and following a 3 year sabbatical, his return to the circuit in 2011 seemed to reignite the flame. Mike Ainscoe takes a listen through his new album ‘Fly’.

It appears that the break has given Gary the chance to rediscover his mojo (or should that be gojo?). In reworking some of his back catalogue on  ‘Looking Forward By Thinking Back’ the  re-launch/re-introduction has had the thumbs up from the likes of Janice Long and Sean McGhee –  looking good so far. Teaming up too with Eddy Morton for this release (who makes a significant musical contribution and on the  engineering/production side) seems to have been a smart move in helping Gary realise the vision of his self penned material.

It may be the experience from working both solo and with bands, but the new material appears in the form of a variety of songs and arrangements in styles showing he has a few strings to his bow  – and just like one of those tins of seasonal biscuits, there may be some which are going to be immediate enough to be snaffled  up while some may sit a while waiting to be appreciated.

From the intimate solo material at the start of the album, it feels like he’s kind of introducing himself again slowly before gradually introducing different elements into the mix. ‘Angel’ and ‘Take The Money And Run My Dear’ a quality opening hit; strong and convincing and just the sort of start to an album which will provide the hook. Four tracks in,  the simple acoustic style he’s opened with starts to become more ambitious in the arrangements. Maybe a realisation or acknowledgement  that a whole album in the acoustic guitar vein might be too challenging and there’s more to Gary O’Dea than a voice and guitar.

It’s probably the curse of the solo musician in trying to offer up something  which goes down a different road. ‘Build It Like A Rock’ shifts the style into a more laid back lounge feel while ‘Interlude’ sees the harp making an appearance in a more bluesy style, there are times when you get a sense of what Paul Weller did when he went solo acoustic. ‘Things Are Gonna Change’ sees the subtle use of the Birmingham Clarion Singers Socialist Choir making their second and more significant appearance, the opening keyboard sound giving the start of the track a Springsteen-y feel and a song which is perhaps the most effective of the more elaborate arrangements.

By the time you hit the title track, a jazzy shuffle,  just like that box of seasonal biscuits, despite the resolve to try something new, you return to the tried and trusted tastes of your preferences and come back to the fact that the songs which stand out and show Gary O’Dea  in the best light are the ones with just him and a guitar with a set of words. Less is more, simple is best – let the quality of the songs come through – all a little clichéd maybe but when you hear Gary do his thing armed with just his guitar then you know it makes sense.

‘Fly’ is available on Bandcamp here

Gary O’Dea and Gojo Music can be found online at www.gojo-music.co.uk. He is also on  Facebook  and tweets  as @gojomusic1