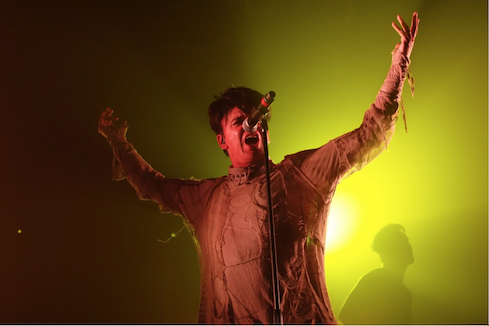 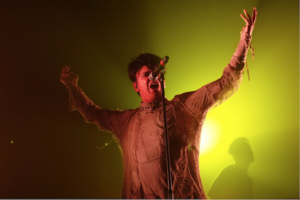 words and photo by Maria Meli

Dystopian is an overused word. It has lost some if its power, yet, dystopian is the best way to describe Gary Numan’s Savage album and supporting tour. Numan, born Gary Webb, has given it back its dark, bleak, oppressiveness. He’s given it more as well. With time, his music has progressed from a futuristic synthesizer sound to a full-assault industrial-Goth meld, especially over the last two albums, Splinter (Songs from a Broken Mind) and Savage (Songs from a Broken World). The first he wrote after a long-term bout of depression and the shadows seeped into Savage. This was the second circuit for Savage. The first, in 2017 when the album was released, made its way to Toronto’s Opera House on December 4, 2017. He set loose his scored doomsday ritual again on September 18 at the Phoenix Concert Theatre.

Numan understands the power of theatre. The band took the stage without introduction, all dressed in cataclysmic rags and tribalistic face paint. Numan never spoke or addressed the audience between songs.  The storm strains of “Everything Comes Down to This” were the catalyst for the show with its static noise reminiscent of computer breakdown and Numan singing, “… Something is broken, twisted, pushes away / No one is listening, what have we done? I’ve heard it in here, the darkness, and lonely again …”  His moves punctuated the acid rain pummelling of guitars and keyboards while Steve Harris (guitar) and Tim Slade (bass) also danced while wielding their instruments like talismans. After the canon shot of the opening song, they moved into the happier cadence of “Metal” from his first solo endeavour, The Pleasure Principle. The songs swung mainly between his early work and his last two albums.

He was bathed in murky light, mostly blues and reds, and a lot of smoke as he lithely moved, bent, swayed, stretched his arms in expansive motions, came to the stage’s edge with beams of light behind him, and moved back to be enveloped in smoke. Like an apocalyptic high priest wrapped in mystique, and his band lower officiates, he evoked a type of religiosity with his whispering and wailing, moving and moaning, and singing lyrics such as, “You’re welcome to stay in my bed of thorns … I am walking through the dust / Pulling out splinters / Of things that never last …” The inflections he used were, and always have been, unique and very expressive. On “Pray for the Pain You Serve” he asked, “Can you see me / When the wind blows through my soul?”  Later, when he protractedly proclaimed “No Mercy” his inflections made it sound like a divine condemnation. Some singers easily trill through vibrato. Numan liltingly buzzed a nuanced roboto.

“Here in the Black” with its symphonic volleys, soaring chorus, percussive timing and Numan’s limber moves, was endearingly dirge-like and surprisingly uplifting, despite the sombre overtones. “When the World Comes Apart” oozed abandonment. The inspirations for these songs were difficult times, but Numan’s lyrics and layering, along with his showmanship, created a web of music and movement, that could be interpreted as reflecting personal misery or struggle, introspective spiritual yearning, or a striving for something better in the world, depending on the viewer’s state of mind.

Eight songs from his 17-song set were from the last two albums, heavy with darkness and biblical references. His music and show evoked rayless, abandoned forests and parched wastelands. It was poignant though and his lyrics are poetic and timeless. He used metaphors like, “I belong here where the shame ends.” At times, it was as if he was calling out from inside a machine, because the first world is often a machine, possibly hurtling toward ruin (another of his motifs). He performed “My Name is Ruin” which can be described as dance beat sci-fi. As the last strains of the second encore dimmed and the lights went up, Numan’s response to the applause was a wordless smile and a wave, then he was gone.

He lives in Los Angeles and has said that he would like to move into writing music for films. “Bed of Thorns” was written for Ghost in the Shell, a futuristic film starring Scarlett Johansson, based on a Japanese book and anime. His use of sweeping orchestral elements in his music shows that he is capable of composing for films. His performance at the Phoenix also shows what a talented artist he is and what a treat it is to see him live.

His North American tour winds up in his hometown on October 6 and then moves to the U.K. for seven dates in November.

Everything Comes Down to This (Splinter)

Bed of Thorns (Ghost in the Shell and Savage)

Down in the Park (Tubeway Army – Replicas)

Pray for the Pain You Serve (Savage)

My Name is Ruin (Savage)

Here in the Black (Splinter)

Me, I Disconnect from You (Tubeway Army – Replicas)

When the World Comes Apart (Savage)

A Prayer for the Unborn (Pure)