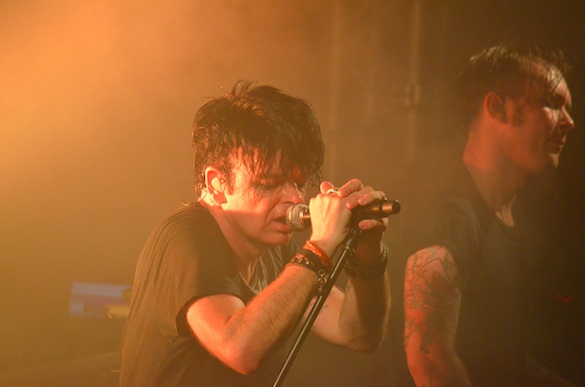 Gary Numan, as befits a man with a 30+ year career, generally appears at arenas – intimate for Gary will be a 1500 capacity city centre venue; as such when I saw that for this current short UK tour he had specifically chosen smaller less well known venues in towns less accustomed to visitations from genuine musical pioneers I grabbed the opportunity. Numan himself had insisted upon an intimate club tour to give fans the chance to see him up close and personal in honour of a very successful year of touring his critically acclaimed album, ‘Splinter (Songs From A Broken Mind)’ which LTW colleague Paul Scott-Bates rightly described as “nothing short of a triumph”

I last saw Gary Numan some 34 years ago, a stone’s throw from Chester just over the Welsh border when in September 1980 he brought the ‘Telekon’ tour to the huge Deeside Leisure Centre and delivered a mind-blowing set built around Numan’s fourth album, the second under his name – Gary at this point was firmly affixed in the android pose, dressed in a black leather jumpsuit adorned with the double red stripe…I seem to recall an awful lot of dry ice and Gary waving around something that resembled a cut down light sabre…since then Gary has gone from pop star status to near bankruptcy, has endured relationship upheaval, bouts of depression, and somewhat bizarrely has seen his musical output be cited by all manner of internationally renowned artists as an inspiration…the other thing Numan has done is persevere; his records no longer bother the mainstream charts but through dogged determination and relentless touring Numan has developed a devoted fan base; perhaps it’s from both his own life experiences and the affection of these fans but somehow Numan has reached a level of musicality and performance that made this gig something special to witness. 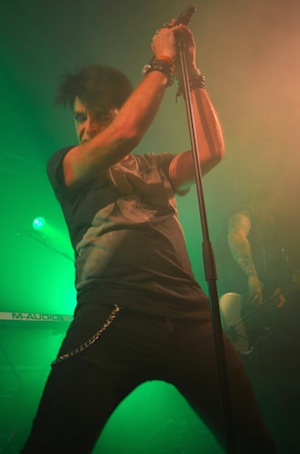 ‘Resurrection’ from the ‘Dead Son Rising’ album acts as the stage intro, whilst Numan leads his band onto the tight Live Rooms stage, it’s apparent that he has kept himself in good shape; dressed in tight black jeans, black boots and a black/grey print T-Shirt, he picks his way through clouds of billowing dry ice before launching into a blistering performance of ‘I Am Dust’ from the recent ‘Splinter’ album, cavernous bass threatening the very structure of the venue – Numan is no longer concerned with presenting a persona, he is here to deliver his material with utter passion and commitment…he wraps himself around the microphone stand, momentarily confined before breaking free in a shower of back lit laser light, limbs flailing all the while his voice holding steady as he reaches for the vocal peaks…’Metal’ sounds like it was only recorded yesterday, this is a Numan classic lifted from the ‘Pleasure Principle’ album, its frightening to realise that this wasreleased way back in 1979! Numan is clearly not content to merely deliver his past hits, each and every one of these tracks has been reworked, reinvigorated, as such ‘Metal’ sits comfortably next to the intense ‘Everything Comes Down To This’ – watching him on stage it’s clear that the likes of Trent Reznor and virtually the entire EBM scene owe their careers to Gary Numan.

Numan doesn’t engage in banter with his audience, in fact he looks abashed when as each song concludes a huge section chant his surname, his only acknowledgement being a genuine smile, we get a few tracks from ‘Splinter’, touching base with ‘Here In The Black’ as Numan briefly retreats behind a keyboard to deliver shards of mechanised noise, the pace is thankfully reduced during ‘Down In The Park’ a brief respite from the coma inducing lightshow, though by now the heat is beginning to take its toll on the cyber-goths decked out in full length leather coats and New Rock boots. Numan himself delivers an intense yet relaxed performance, he is focussed on his performance; this was clearly the aim of this tour – strip away the stage show excess, give the fans a dynamic uplifting display that rightly concentrates upon the music…Numan himself is now pin-balling the stage, he looks like a man reinvigorated; he’s even head-banging at one point!

‘Cars’ precedes the industrial chaos of ‘Pure’ – pummelling drum beats, machine noise and distorted wailing guitar drawing you into the darkest of Numan’s lyrical repertoire, ‘Splinter’ follows, drawing from the East to remind the followers of Nine Inch Nails and the like just who started all of this, sticking now with the ‘Splinter’ album we get ‘We’re The Unforgiven’ and the majestically anthemic ‘Love Hurt Bleed’ before he concludes the set with ‘A Prayer For The Unborn’ though he was never going to be allowed to leave it there, a few minutes later returning with an initially stripped back ‘I Die You Die’ rapidly followed by ‘Are Friends Electric’ – a track that never grows old, but as with ‘Metal’ Numan has revisited the track, reworking it with audience chanting into am almost quasi-religious mantra. Numan concludes with the brooding noir that is ‘My Last Day’ – the entire stage washed in blue light, the lights lifting as Numan again retreats behind his keyboard, the song building to a huge climatic finale, before once more Numan and his band exit the stage.

This was a show that revisited all points of Numan’s career, yet nothing seemed out of place; Numan is as relevant now as he ever was.