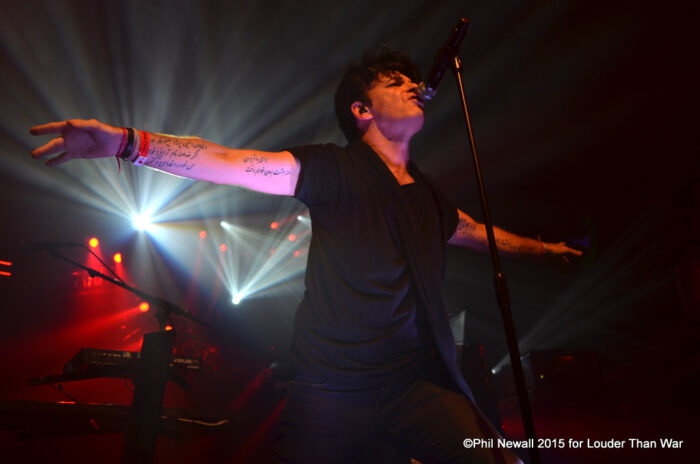 Gary Numan is currently riding the plaudits bestowed upon perhaps his most accomplished work ‘Splinter (Songs From A Broken Mind)’ – a darkly powerful album, that combined cutting edge electronics with classic Numan song writing; the album returned Numan to the UK Top 20 for the first time in 30 years and demonstrated that Numan is not willing to simply rehash Rewind style those classic Tubeway Army chart hits; as such I was a little concerned when I saw the format for this short run of dates – Numan intending to revisit the ‘Replicas’, Pleasure Principal’, and ‘Telekon’ trilogy of albums…I really should have known; there was no chance of him dipping into nostalgia, tonight’s astounding performance saw Numan revisit, rework and energise the music that sound tracked the teenage years of much of the audience.

The expansive Academy stage was shrouded in darkness, visible through the shadows was a montage of the three albums covers centre pointed by four huge angled lighting rigs; through oceans of dry ice Numan led his band out to a sell-out crowd, the majority of which were repeatedly chanting “Nuuuman, Nuuuman” in a manner more akin to a sporting crowd…Numan himself is not one for stage banter, instead he picks up his guitar and as the intro theme fades into the gloom he launches energetically into ‘Replicas’ the title track from the final album to be delivered under the Tubeway Army moniker, and the album that was responsible for transforming Numan’ life from that of cult performer to a subsequent UK, European and worldwide name, the stark mechanised drum sound of the original recording has been replaced with an immense drum sound, the instantly recognisable keyboard refrain has grown into cathedral style wave of sound that floods the cavernous venue; Numan wrapping himself around his microphone stand, for such a mechanised sound there is something darkly sexual, almost organic in its nature, as the track drops away the nagging riff of ‘Metal’ rises only to be dwarfed by a bass sound of such proportions the entire venue is shuddering, Numan’s icy vocal delivery is surprisingly strong, between verses he traverses the entire stage, before seizing the mic stand raising it aloft then crashing to the floor.

‘Remind Me To Smile’ is the first visit to the ‘Telekon’ album – for many ‘Telekon’ represents the pinnacle of Numan’ creative urges, the electronics being softened, less austere – personally I always enjoyed the more machine driven processed beats, so when the distorted refrain of ‘Me I Disconnect From You’ rings out I am transported back in time, to a time when carrying a Tubeway Army album to school ostracised you from the masses…but wasn’t that always the aim? 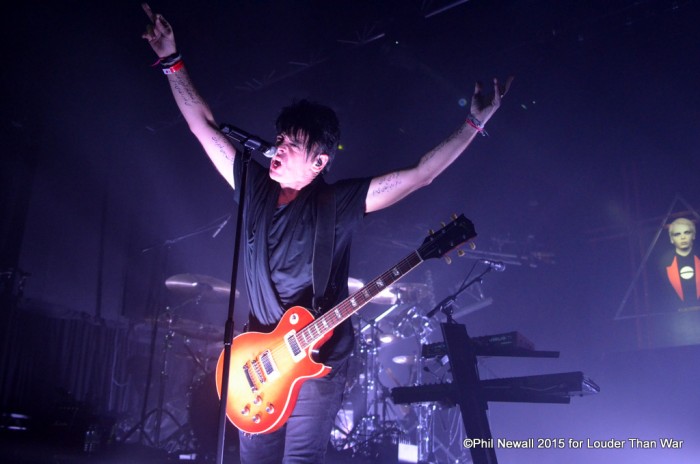 ‘Films’ has risen to almost glacial proportions and reminds us quite why Numan has since been feted by the likes of Trent Reznor, the song a perfect synthesis of human emotion and machine delivery, similarly during ‘Down In The Park’, the familiar synth chords silencing the audience, the backdrop flickering as we all sing “You can watch the humans trying to run…” Numan responds, almost spitting out “Death, death, death” – for music once described as emotionless Numan is pouring his all into this performance, his arms twisted, sinews straining – dramatically different from those TOTP appearances all those years ago…’Do You Need The Service’ is perhaps the most traditional ‘rock’ song of the night, bass heavy with a reliance on guitars to the extent we even get a guitar solo and breakdowns, we are brought back to the electronics with a blistering combination of ‘We Are Glass’ – the stage sun spots lowered right to audience eye line, as Numan literally hangs from his mic stand before launching forward punching the eye in time to the beat, the lights washing over the entire crowd, and then iconic ‘Are Friends Electric?’ rains down…the track could easily have become a burden to Numan, however its apparent he has not let it define him, he has continually refined it to the point that its performance has become a communion call for himself and his devoted followers…he subtly reiterates this very deliberately – looking out and gesturing to the entire audience, before tweaking the lyric to “you see THIS means everything to me”

‘Cars’ follows and in similar style Numan has further refined the sound, clearly the memory of a No.1 hit is that…just a memory, the song is supreme to Numan and he has taken it from keyboard driven pop smash into a dangerously dark and powerful burst of adrenalized energy, the perfect precursor to ‘I Die You Die’ – is that a mosh pit front of stage!!

Returning for a well-deserved encore of ‘Everyday I Die’, ‘My Shadow In vain’ and the magnificent ‘Jo The Waiter’ which upon release preceded all of tonight’s set, delivered true to the original, semi acoustic before concluding with its sudden finish.

Whilst Numan himself baulks at the thought of nostalgia, you can’t help but indulge occasionally and tonight was one of those moments when you could gorge on it.