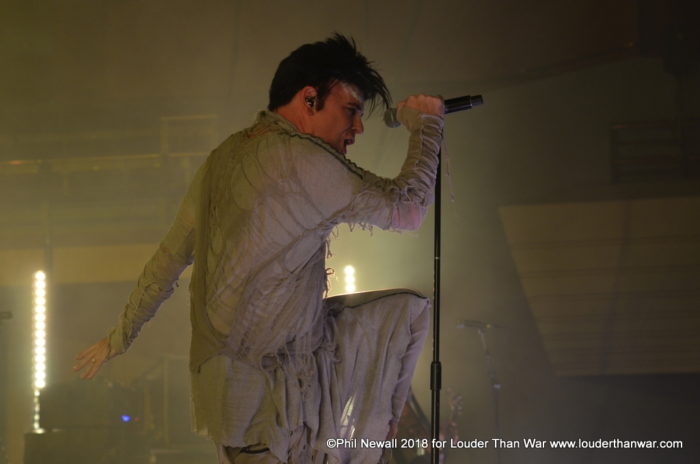 Many artists have experimented with orchestrated variants of their music – some to great success, others less so; I would rate Midge Ure’s ‘Orchestrated’ as a triumph for he didn’t just add layers of strings over the original pieces, he completely reimagined the tracks and had the material performed by an orchestra, the forthcoming Killing Joke ‘Symphonic’ project has been over two years in the making but again sees the source material played entirely by an orchestra, with the added advantage of the St Petersburg Symphony Choir.

Echo & The Bunnymen took a slightly differing route and have been accompanied by the Liverpool Philharmonic Orchestra, Sigur Ros adopted the same tack for the album ‘Með Suð Í Eyrum Við Spilum Endalaust’ utilising The London Sinfonietta chamber orchestra and a choir.

Numan alongside the fledgling Manchester based Skaparis Orchestra for this series of performances seems to have settled for somewhere at the mid-point, and tonight within the magnificent, and acoustically optimal surroundings of the Bridgewater Hall he elevated the occasion with the addition of the Kantos Chamber Choir delivering a truly compelling set built around his current ‘Savage’ album with a few old favourites added.

The stage layout saw The Skaparis Orchestra conducted by Simon Robertshaw, albeit minus brass and woodwind, in an arc to the rear of the compact stage, the Kantos Choir are positioned on a dais shadowing the orchestra; Numan and band to the fore in their traditional layout, the Orchestra are dressed in tour T-shirts, some with ‘Savage’ face paint whilst Numan and his band are in the now familiar post-apocalypse Savage outfits. 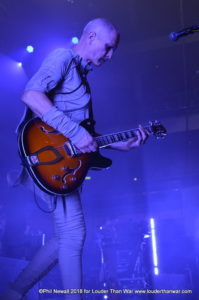 Opening with ‘Ghost Nation’ it was obvious from the outset Numan had invested a great deal of time into ensuring these performances were something special; eight tons of lighting rig washed the stage in an array of complementary colours whilst five enormous rear screens projected images of the ‘Savage’ promo clips; Numan had worked alongside Robertshaw to ensure each element complemented the other; as such the sound was magnificent, Skaparis adding tonal nuances as they illuminated tracks like ‘Metal’ and ‘Bed Of Thorns’ which took on a stronger more beguiling eastern tone, Numan himself cavorted around the stage weaving between guitarist Steve Harris, and Tim Muddiman.

‘Films’ could have been written with orchestration in mind, the strings and additional percussion adding depth to the originals dark majesty; ‘Everything Comes Down To This’ is slick, muscular, and despite the aggression of the track is given a level of subtlety only spoilt by an array of audience voices repeatedly chanting “Numan, Numan” at every opportunity…sadly, this continued throughout the evening… ‘Down In The Park’ saw those familiar synth lines buoyed by the Skaparis strings, stretched out, menacing, complimenting the banks of stark blue lasers now piercing the dry ice. 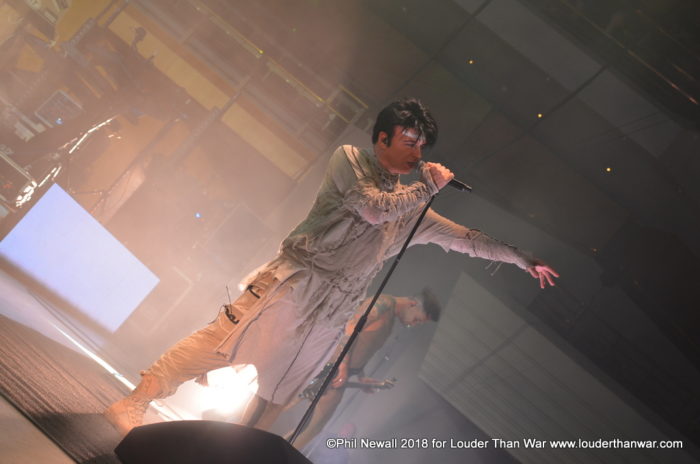 The grace of ‘Broken’ was evocative, despite the shouting from a few in audience, before buckling beneath a cavernous bass bolstered by dark cello; similarly evident during ‘Here In The Black’ which took on new levels of foreboding, Numan’s own stage antics saw him narrowly avoid mishap as he collided with Steve Harris, recovering into ‘My Name Is Ruin’ sadly his daughter Persia was not onstage, though this allowed the Kantos Choir to shine; I was pleased to hear ‘Jagged’ which in this context morphed into a razor sharp behemoth; ‘Mercy’ was enormous, percussive pulses, scorched earth bass and the ascending voices of the Kantos Choir, this really was something to behold, whilst ‘Are Friends Electric?’ smouldered, the orchestra fully understanding the power of the space within the song; Numan at times having to concede the vocals to the entire audience as he was visibly overcome with emotion before accepting the applause and leading his band from the stage.

Returning to encore with four further tracks; the darkly atmospheric ‘This Wreckage’ the additional strings amplifying the tracks brooding melancholy, the perfect lead into ‘The End Of Things’ which transformed into a glowering soundtrack to a yet to be made dystopian film epic, and ‘A Prayer For The Unborn’ – perhaps the highlight of the night; strings shimmering in the darkness, Numan wrapped around his mic stand ahead of the thunderous reverberating sounds; this was spine tingling stuff. 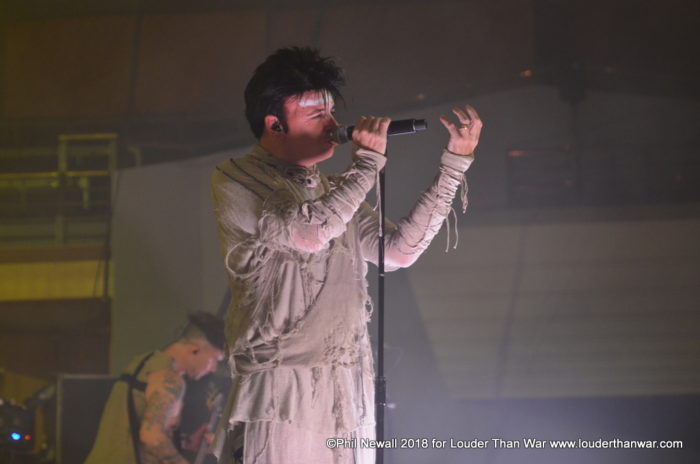 Numan took the time to thank both Orchestra and choir before introducing ‘It Will End Here’ the lead track from the current ‘The Fallen’ EP; he hadn’t provided either with the music so this one was left to his band, further demonstrating that Numan is far from prepared to rest on his laurels; he is continuing to develop musically, forging ahead on his terms.

Numan at Bridgewater Hall was a moment to remember, every track delivered with precision, yet retaining a dark intensity; despite a career stretching back some 40yrs, Numan is perhaps only now hitting his prime.