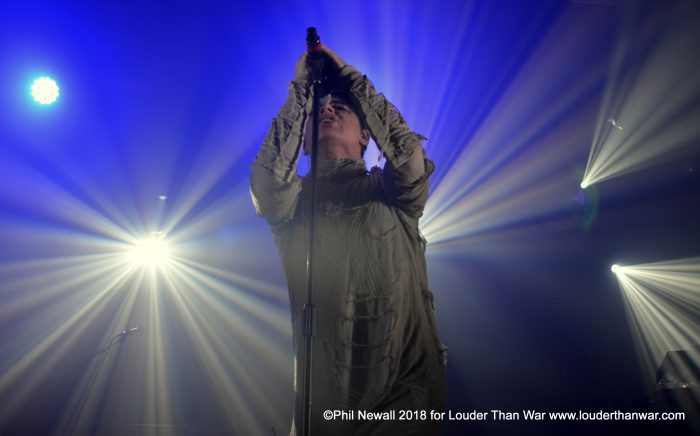 Well, that was some climax.

The android who fell to earth, whose live stage presence is now closer to Iggy Pop’s feral abandon than the alluring period alien of his Top Of The Pops period tops out the Saturday night headline slot to the biggest crowd the much loved new festival has seen.

Two years of touring, Savage, his biggest-selling album for years saw Gary Numan play the last date on the album tour and exit the stage at the now firmly established and popular festival in a flurry of powerful techno electric industrial noise and skree.

This is no greatest hits set but a reaffirmation of restless creativity pushing forward with a hyper-modern sounding 21st-century concert that even when it revisits old songs reevaluates and changes them, tweaking their sound, changing their dynamics and making them sit with the current muse and sound and making those classics sound and feel right now.

Unlike many of his contemporaries, Numan is still fast-forwarding into the future and has smartly embraced his imitators and fans like Marilyn Manson and Nine Inch Nails and added and enhanced their take on what is increasingly been seen as his groundbreaking music.

In the post-punk period, Numan was looked on unfavourably by critics who called him spectacularly wrong. Of course, success has always soured a reparation and Numan was Adam Ant massive in the period, a genuine pop star with huge hits and a mainstream presence which was pretty remarkable considering just how left field much of what he was doing was. He was an electronic music pioneer and his otherworldly songs were at least a decade ahead of the game.

In the in conversation, I conduct with him with his before his set he himself looks baffled at this success decrying any notion of genius in music and celebrating an instinctive twinge of when an idea works and creating the magic stuff out of thin air.

He talked about creating the alien personae to deal with stage fright and, maybe unwittingly, reflecting his now documented Aspergers. His initial mega success saw Numan as a ghostly presence in the pop party with a series of huge hits that were key in breaking electronic music into the mainstream. It was a sound forged by chance after his initial post-punk was twisted after finding mini Moog in the studio when he was recording songs with the Tubeway Army and moving away from the guitar/bass/drums of their earlier period.

For a few years, the mass success seemed effortless but then came the inevitable slide and a paranoia about writing hits that saw him slip into second-guessing his own music. It was only when he met his now current wife, Gemma, that he began to get on track after she cajoled him into following his own creative intuition and built up his confidence instead of hiding behind a myriad of other musicians.

The second wave of Gary has continued to this day with a darker and more dystopian take on his style and an embracing of the industrial music that already owed him a huge debt.

And that brings us to tonight – the Savage album has been his biggest for years and seen him in a late period flourish. The set combines a melodic mystery and a machine like power and is still a futuristic take on the keyboards combined with high decibel guitars that has become his staple for years.

It’s a powerful combination and the band can really rock out but retain that mysterious allure of those keys that makes them still sound future perfect. The singer is now in touch with his human and physical side and thrashes around the stage with an energy that is so opposite of his original public personae and it’s a captivating site.

He still sings in that distinctive burr of a voice, sounding somehow detached and engaged at the same time. It’s his trademark and quite like anything else. Primarily a songwriter his music is crafted and the live sound is perfection. There is not one flaw or chink in the armour and combined with a scaled down and yet still pulsating light show this is the best permanence that many long term watchers have seen from him as that powerful bond between Numan and his loyal fans is melded yet again.

Where he goes next will be fascinating.