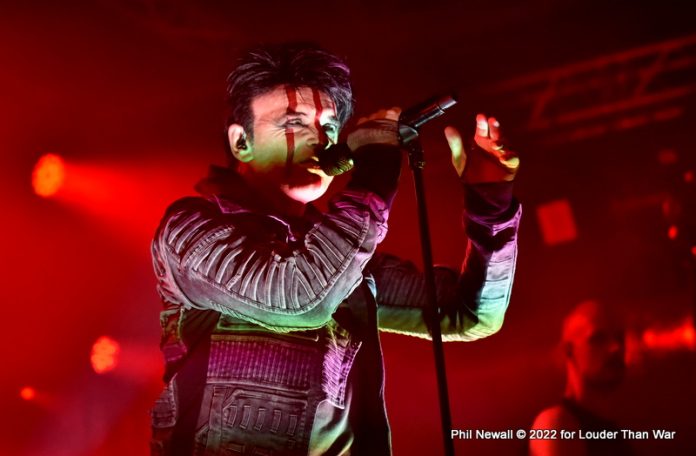 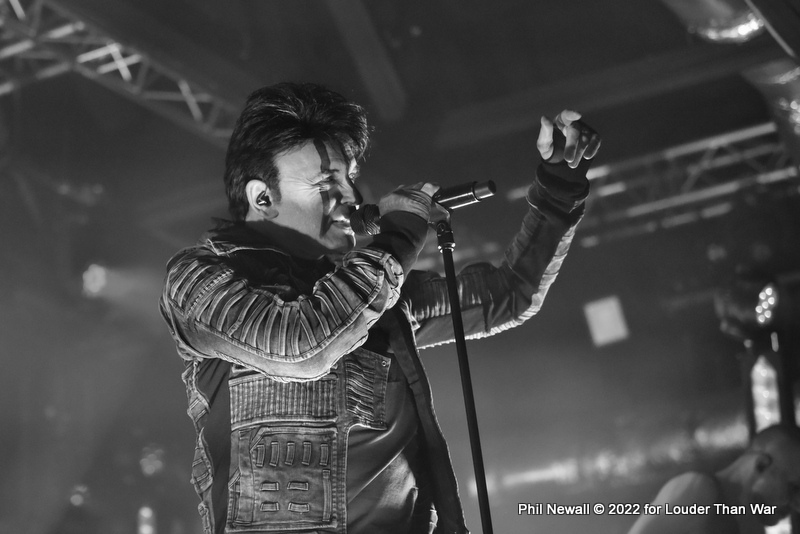 Gary Numan brought his Intruder tour to a hot, and tightly packed Liverpool; Phil Newall was there to catch the set.

Gary Numan released his nineteenth album, Intruder (LTW Review) back in May 2021 in the midst of the Covid pandemic, all planned touring schedules to promote the album were shelved, and the tour finally starting in the USA earlier in February 2022 – though this then took a wobble when the touring party, including Numan, were hit by Covid. Now, finally, in the UK and with a high profile return to Wembley as part of the schedule, Numan brought Intruder to Liverpool.

The O2 Academy has a fairly tight stage, despite this Numan’s crew had been able to back light the space with a huge video wall which displayed a blazing vision of hell to reflect the overall theme of the album, column lights illuminate from the wings as shadowy figures step to the fore; a hugely appreciative roar greets Numan who is dressed in a Bladerunner 2049 styled outfit, he has the now familiar three red stripes daubed across his face, to his right guitarist Steve Harris (limited to a solitary centre strip) is dressed in a long black skirt, similar to that of bass player Tim Slade who seems to have taken the bold step of having his slashed to the waist.

Intruder literally ignites Numan, he traverses the stage, menace in his sights as he clings to the mic stand, his voice is strong, crystal clear above the swathes of synths, and rumbling drums
whilst Harris and Slade combine into a hugely effective rhythm section, which as we time-hop some 43 years back to Me, I Disconnect From You sees them at their strongest. Despite the decades of separation, both pieces of music nestle comfortably against each other. Numan cavorts around the entire stage, Steve Harris and Tim Slade engage in what looks to all to be some sort of dystopian jousting. Despite the obvious well-rehearsed theatrics, as the song fades to its close Numan playfully taps Slade on the backside to the amusement of the entire band – its clear this is a band at the top of their game, fully enjoying every moment of the performance. 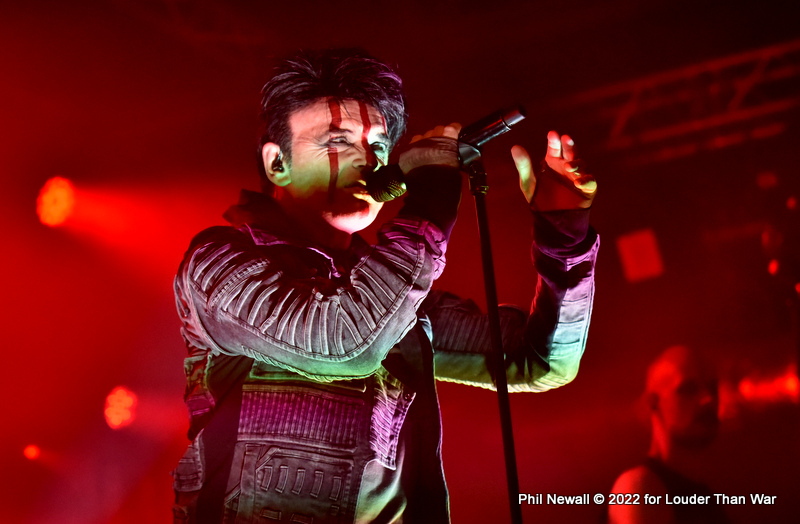 Halo, lifted from the 2006 Jagged album sounded suitably ominous: cavernous bass threatening the very fabric of the building, whilst those guitar slashes perfectly matching Numan’s distinct voice. Metal has transitioned into a grinding industrial assault on the senses, the backdrop displaying cluster bombs dropping, searchlights arc out from the stage, Numan is in full throttle, pinballing the stage, he crouches down, head lowered scanning the audience, similarly during Is This World Not Enough and the lower paced Films, Numan despite never actually speaking is able to connect with the crowd.

Resurrection, see the entire band leave the stage whilst the samplers set the tone before segueing into a perfect genre defining Down In The Park, the confusion, the sense of hopelessness is all present in those swirling synths. Dead Sun Rising and Cars preceded the pulverizing My Name Is Ruin, Persia’s image and vocals fill the backdrop, Numan himself turning to watch his daughters image – rumour has it she will be appearing on stage at Wembley; this is the darkest material Numan has crafted in years, despite his entire career being based upon musical technology, there is a very welcome primitive feel to his material which the mosh-pit raging crowd are joyously reacting to. The set closes with a remarkable I Die You Die, a song that has switched from a shiny synth pop gem to a foreboding industrial behemoth. 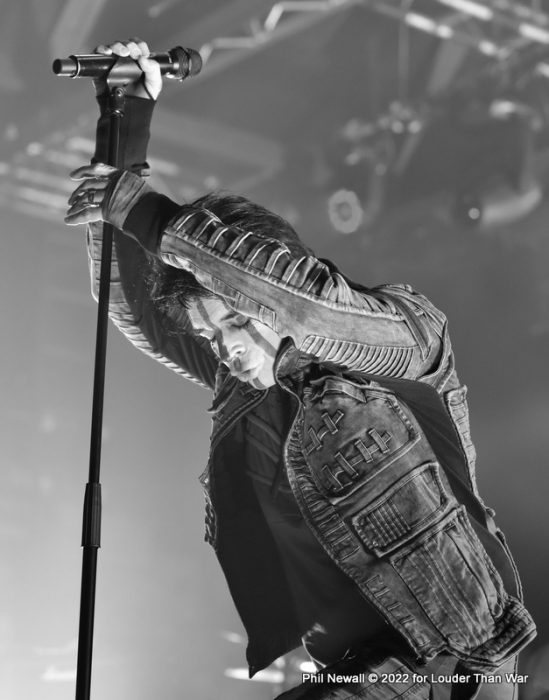 Encoring with The Fall and the timeless Are Friends Electric, Numan has delivered a perfect set, drawing from his entire catalogue, he and his band provided both a visual and musical spectacle that you should ensure you catch.