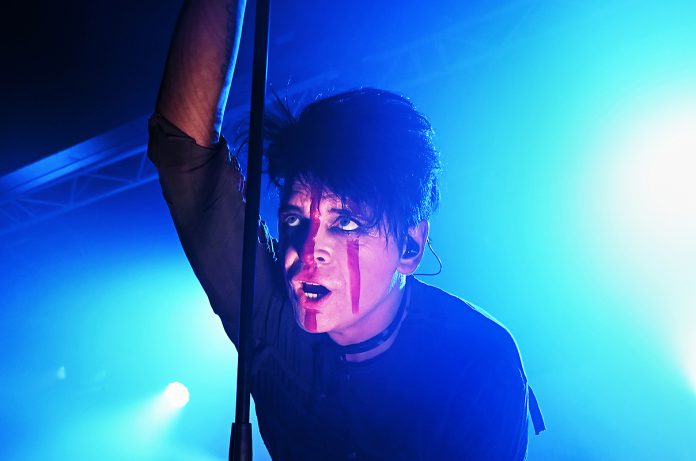 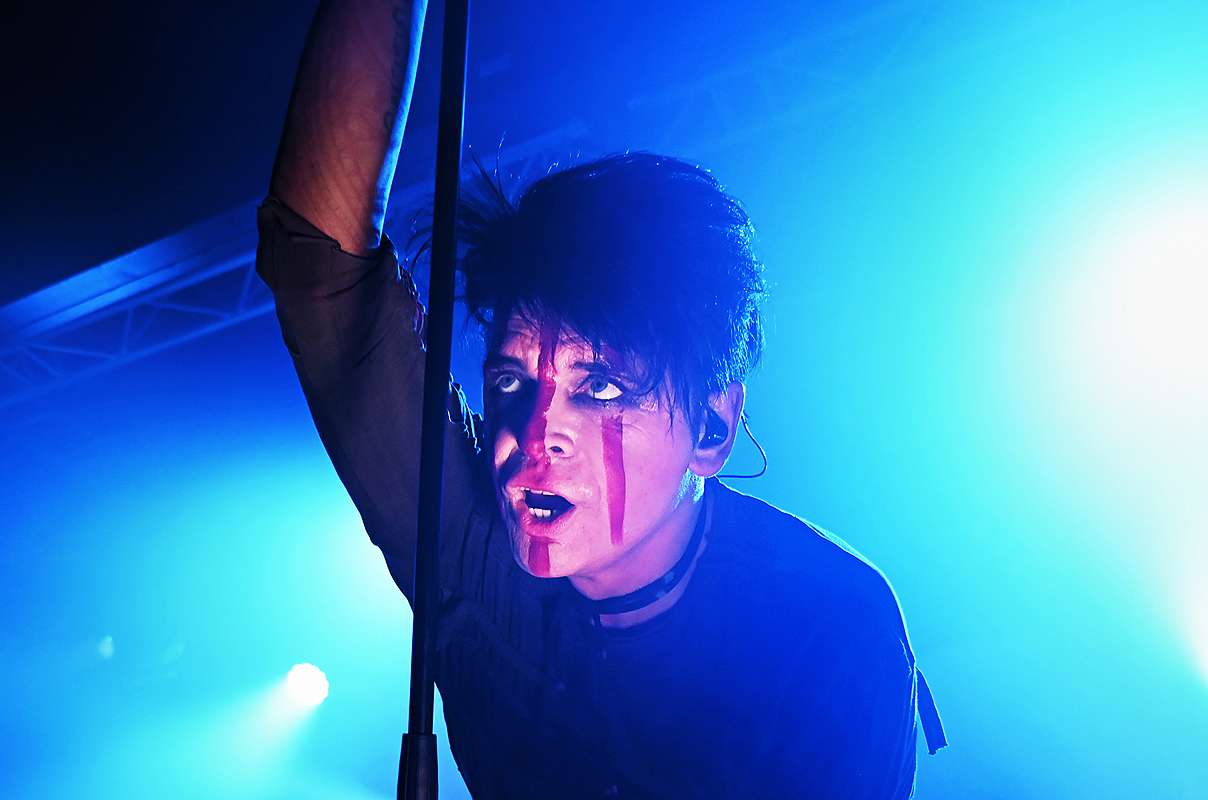 Louder Than War catches up with Gary Numan for a live photo review as his Intruder tour arrives at O2 Academy, Liverpool. He doesn’t disappoint, delivering a performance that just oozes with the pleasure of being on a stage.

The stage darkens to the sound of sombre electronica and a chant of “Numan, Numan” springs from the crowd. Backstage projections flicker to life and the band stroll on stage. There are roars of approval as Gary Numan appears. He briefly acknowledges the applause before launching into Intruder. The title track from his current album opens with swirling keyboards before hammer like mid paced electronic beats kick in. And then the unmistakable sound of his voice rings out. It’s deeper in tone but some of his phrasing has changed little in over 40 years. Lyrically the song plunges headlong into Numan’s current concerns. Political betrayal and societal blindness to impending environmental disaster are to be recurring themes throughout the evening. 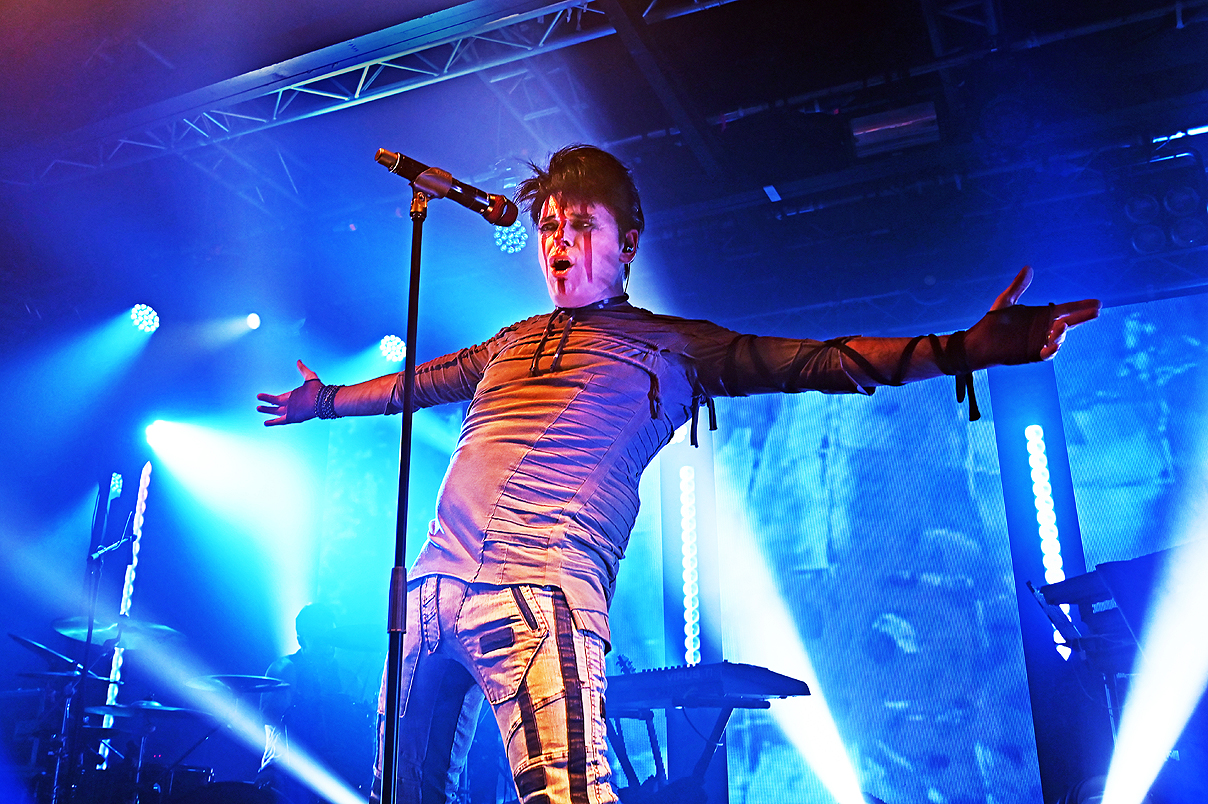 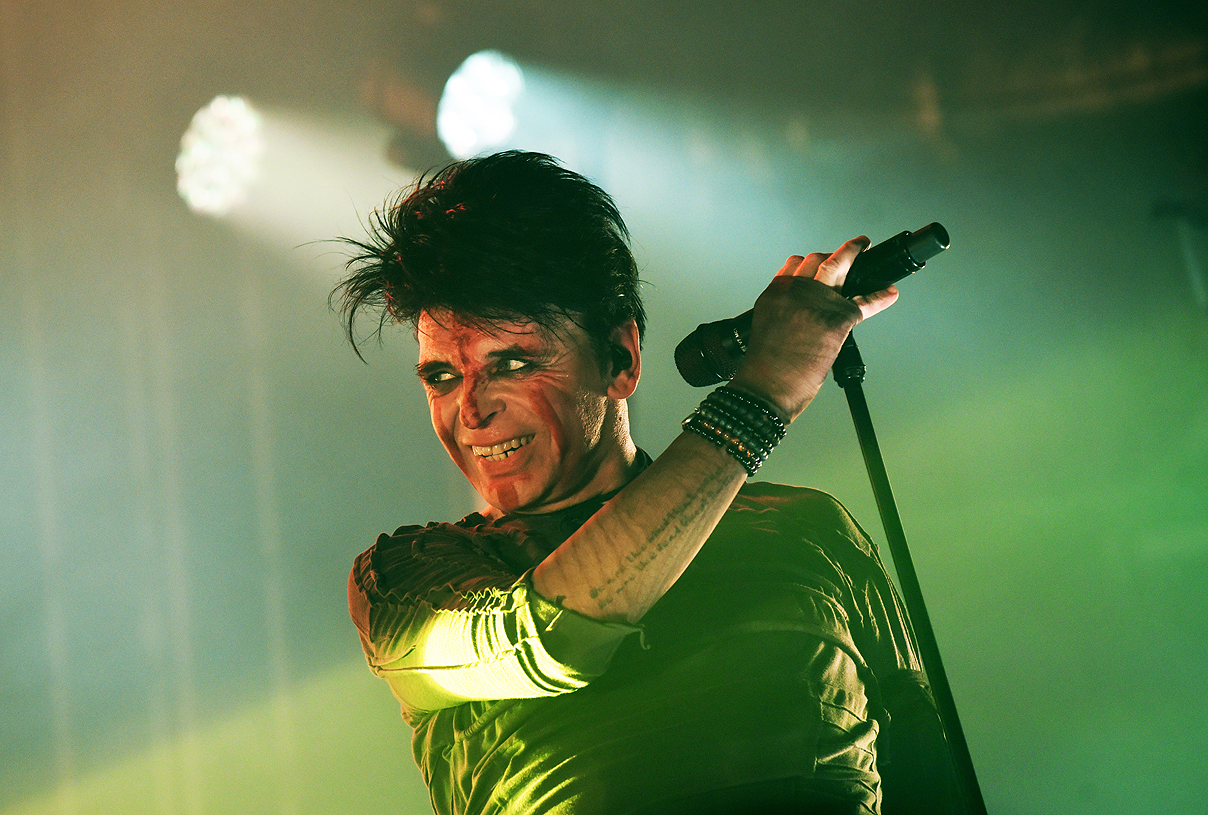 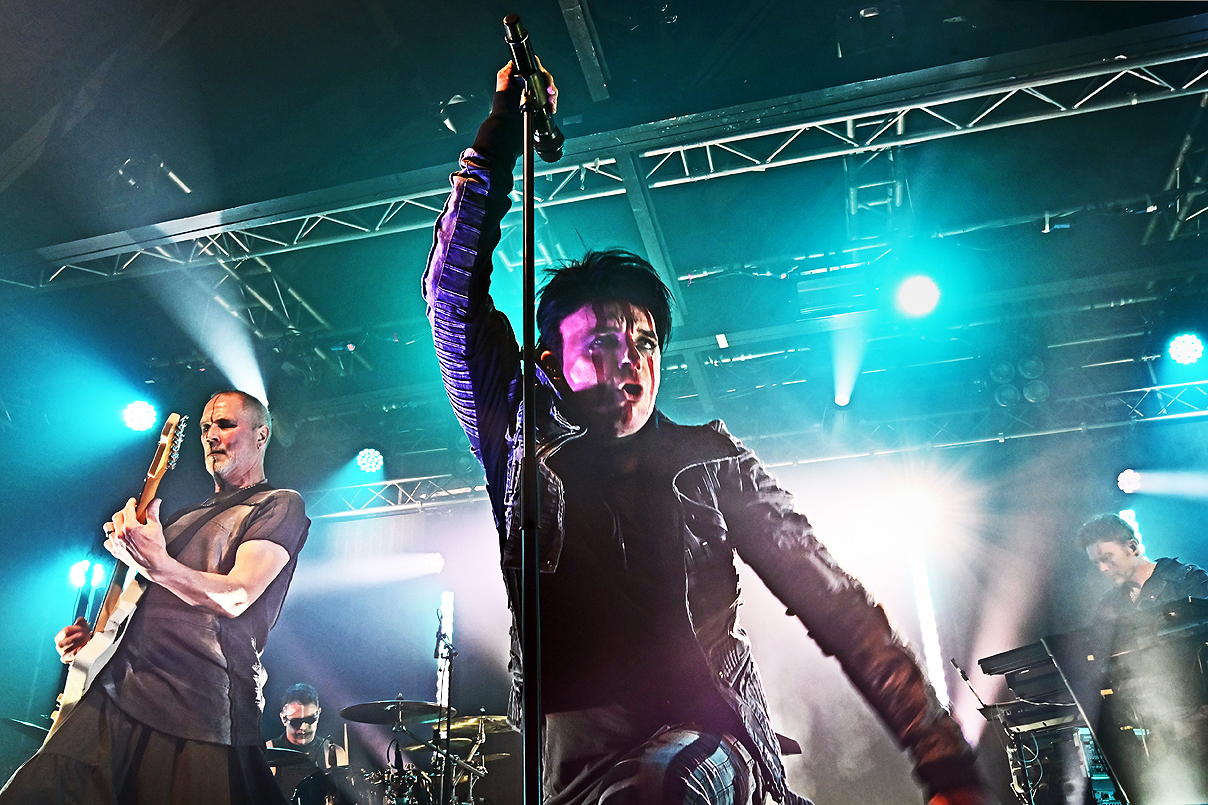 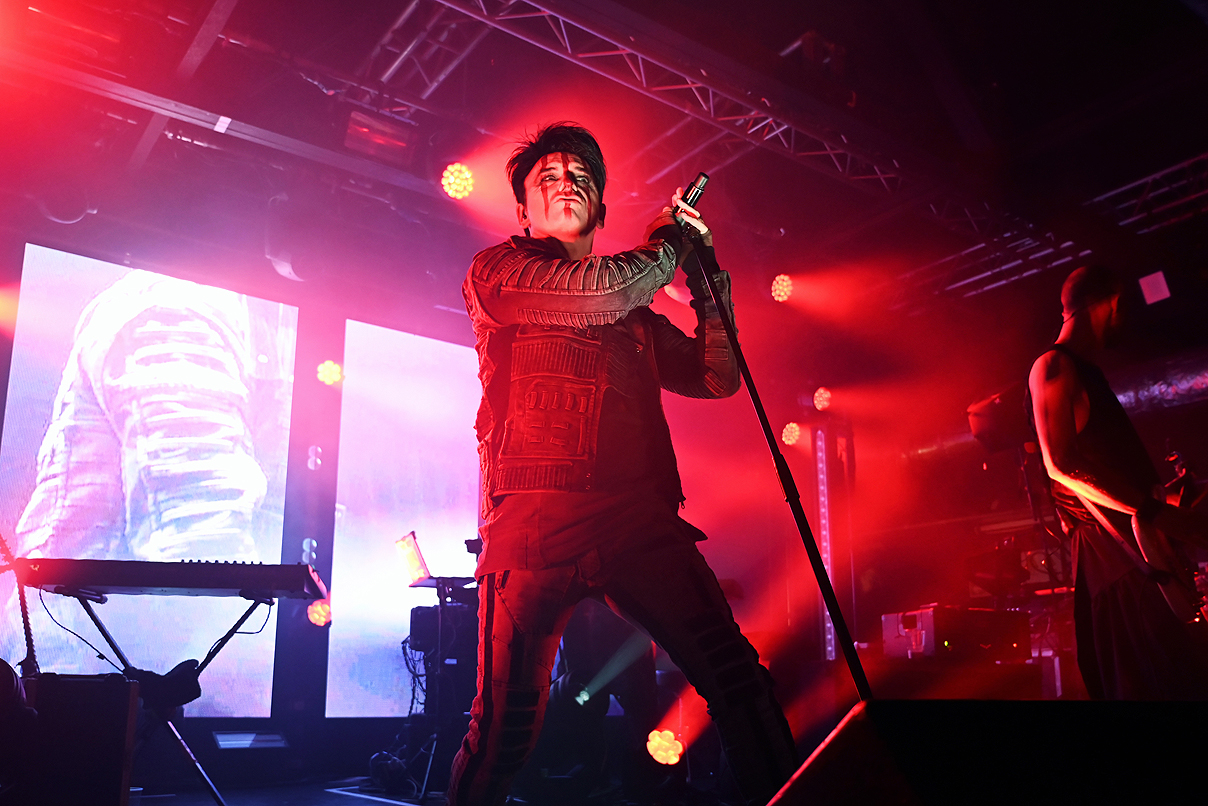 It isn’t long before a pattern emerges. There are plenty of tracks from the current album Intruder together with other more recent compositions. Interspersed between them are classics from the past. Some are delivered in forms quite faithful to the originals but others are initially unrecognisable; redrawn in his current darker, rockier style.

Numan is the perfect frontman. Visually, he’s an irresistible force. His face, painted white with red slashes, becomes increasingly smeared and smudged with sweat as the performance progresses. Yet it’s his perpetual movement that really captivates. He’s not exactly dancing, his movements not entirely choreographed, but they’re mesmerising and sonically perfectly attuned. Throughout the night the band play in front of a row of ever-changing screens. They’ve been designed for much larger venues at, Brighton, Plymouth and Wembley to be visited later in the tour.  It’s a pity that the diminished rig and production is somewhat compromised in the small low ceilinged Liverpool Academy. 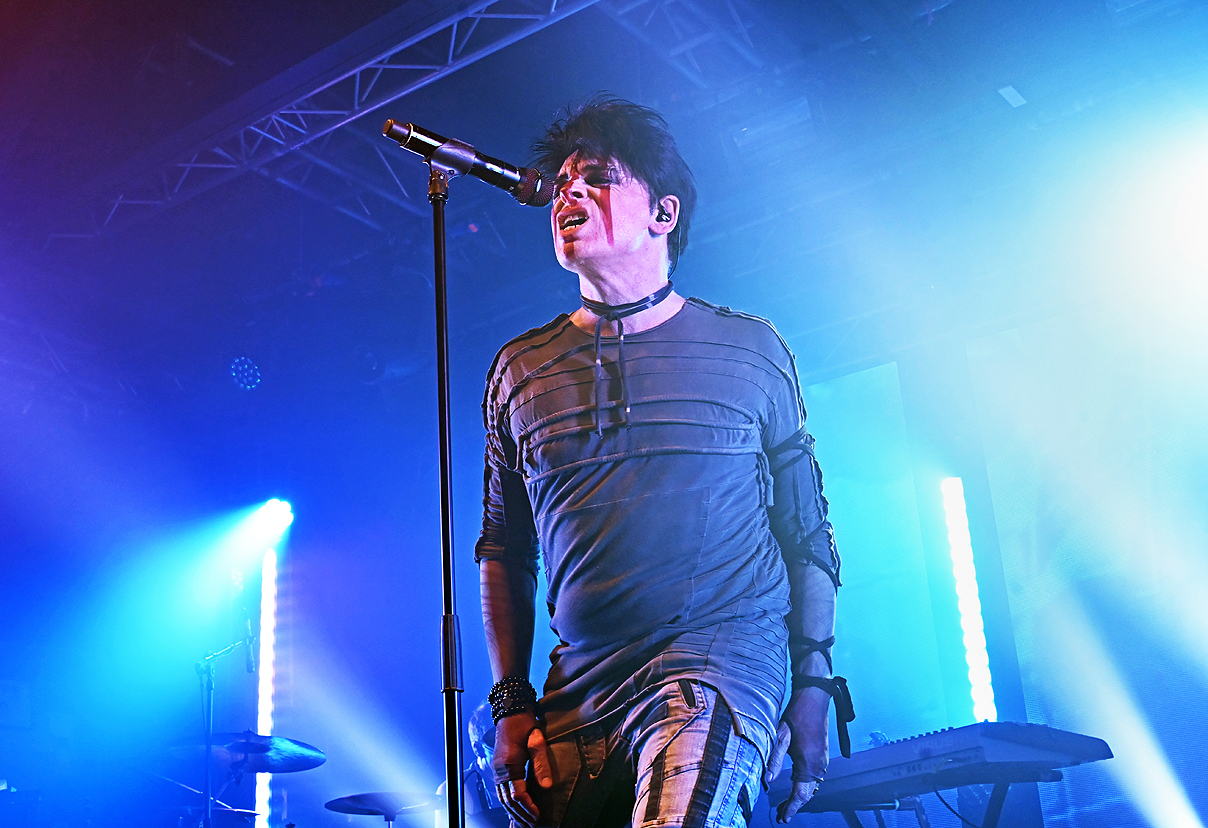 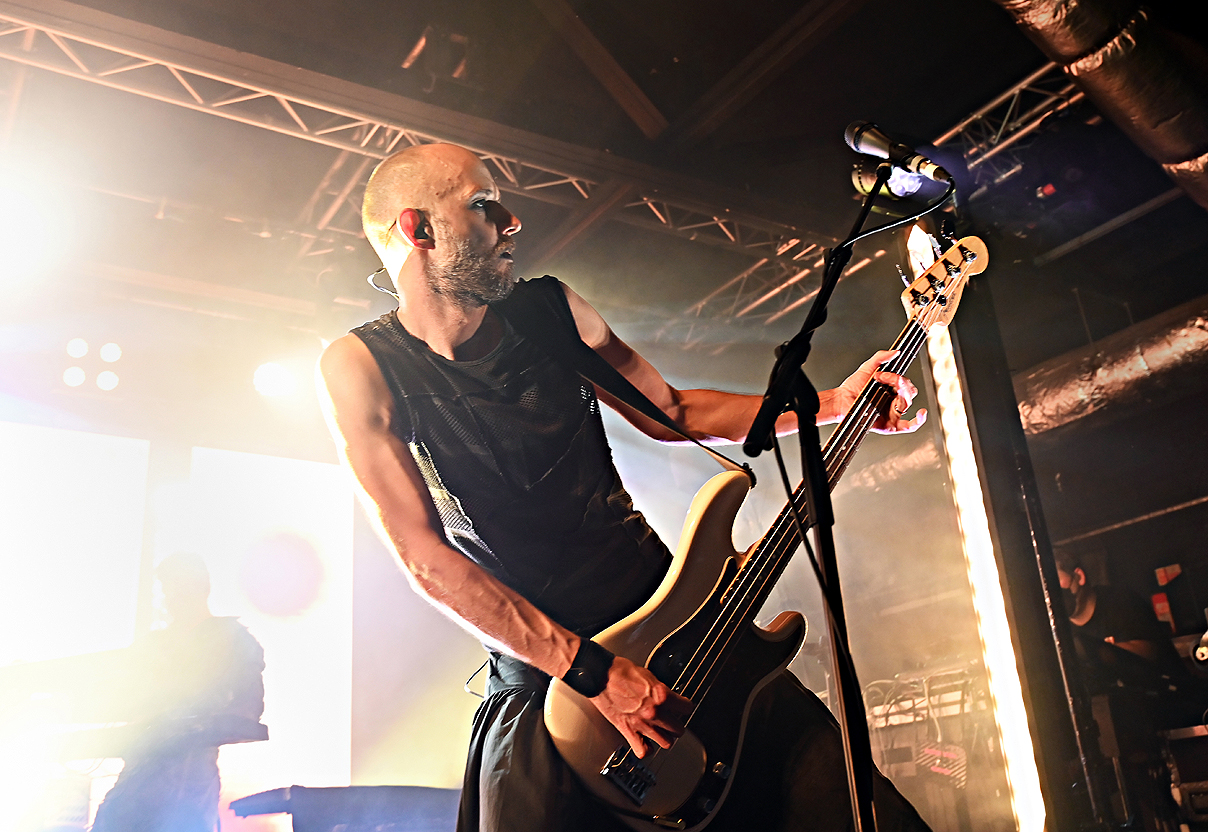 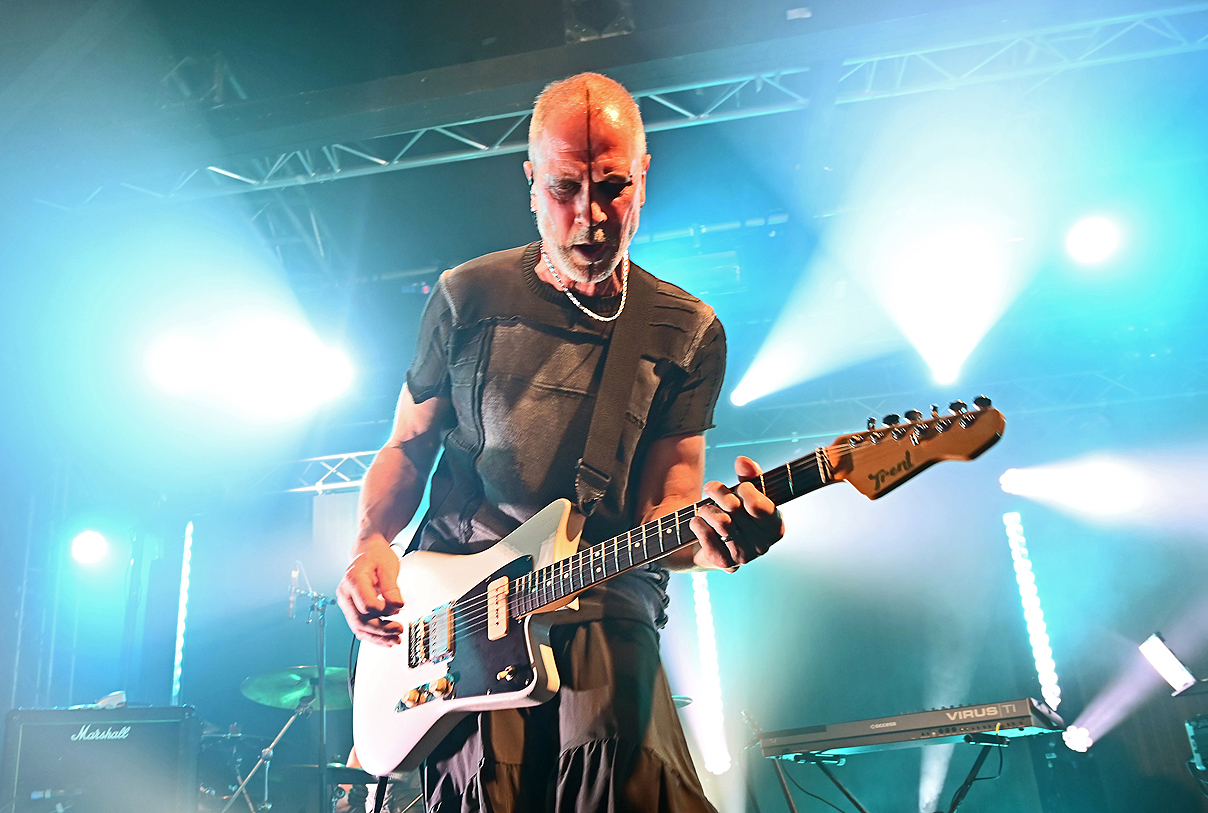 After playing for close to 90 minutes they close with I Die: You Die. It’s great to hear it transformed from the twee poppy original into something far darker and more befitting the song’s title. Inevitably they return to encore with Are Friends Electric. Its opening sees a sea of arms raised, arching forward; fingers pointing. It’s clearly meant as a signal of appreciation but for a brief moment, it has undertones of malevolence, reminiscent of thugs chanting at a football match. The moment quickly passes, overwhelmed by euphoria as the crowd soak up the song they’ve been waiting for. Then all too quickly Gary and the band thank us and they’ve gone. We’ve had a great evening sprinkled with tracks from across Gary Numan’s career. I’m sure that seeing the full stage production in a larger venue would have been impressive but that would have detracted from the energy and intimacy of a packed Liverpool O2 Academy.

What really made this gig special though was the band. Musically they’re faultless, with guitar and bass also acting as great visual foils for Numan. Above all though, this was a group of musicians who are really enjoying playing. For all the dark sounds and sometimes doom-laden lyrics, my abiding memory will be of the huge grins that beamed from Gary Numan and his bandmate’s faces. Grins that got wider as the evening progressed and spread infectiously around the room. This wasn’t a band at work, going through the motions. This was a band doing what they love.

Words and photos by Trev Eales. More work by Trev on Louder Than War can be found at his author’s profile. Trev’s photography portfolio is here