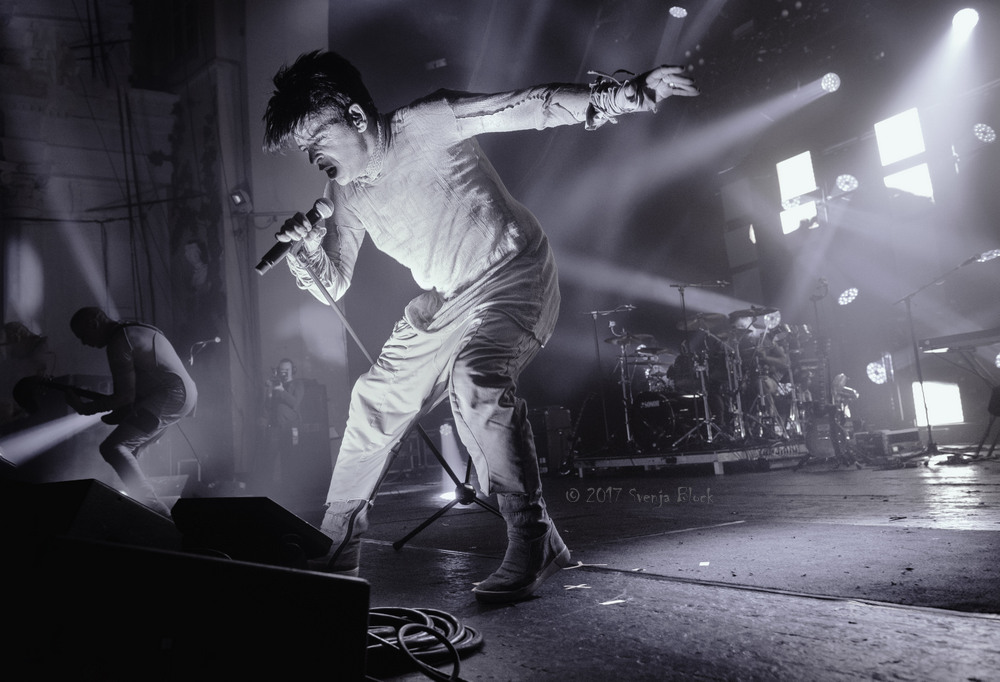 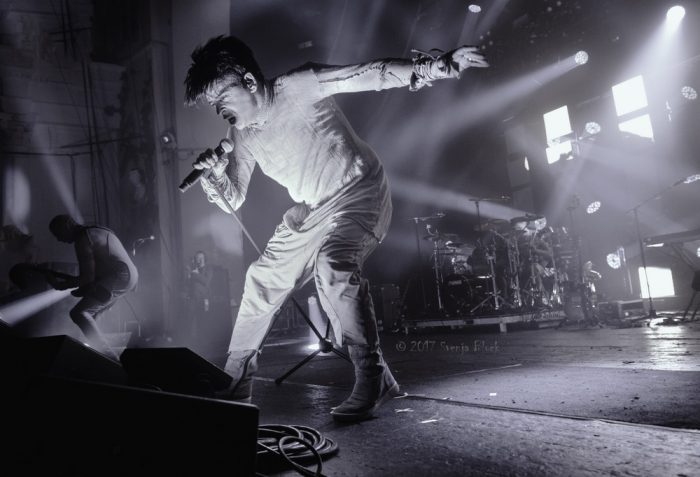 Gary Numan, the mysterious visionary and master of electronica, brought his Savage Tour along with his new album into London over the weekend. Kristiina Treganna Malinen was anxious to see him perform. (Also check out the in depth review from John Robb from The Membranes on Louder Than War here)

The beautiful, Art Deco style Brixton Academy has seen many acts on its stage since 1929 when it was built, but if its walls could speak, then I am positive they would shiver, stating how stunned they are about the show they witnessed yesterday.

This commission was taken by someone who didn’t know an awful lot about the artist she was going to write about.  I obviously took a bold dive straight into the deep end of the pool and went to my first ever Gary Numan gig after carrying out research about his past and more importantly to where he is at today. His brilliant new album, Savage (Songs From A Broken World) has been on heavy play in our household and at my work this week and I’d like to take the opportunity to declare that I’ve grown really fond of it.

Gary Numan himself said in the interview he did with PRS, following his receipt of the Inspiration Award at the 2017 Ivor Novello Awards , that dwelling in the past doesn´t interest him. He is more interested in the moment, and in the future.

The Inspiration Award is something he surely deserves, being one of the pioneers of electronic music by having published 20 albums in the last 38 years. 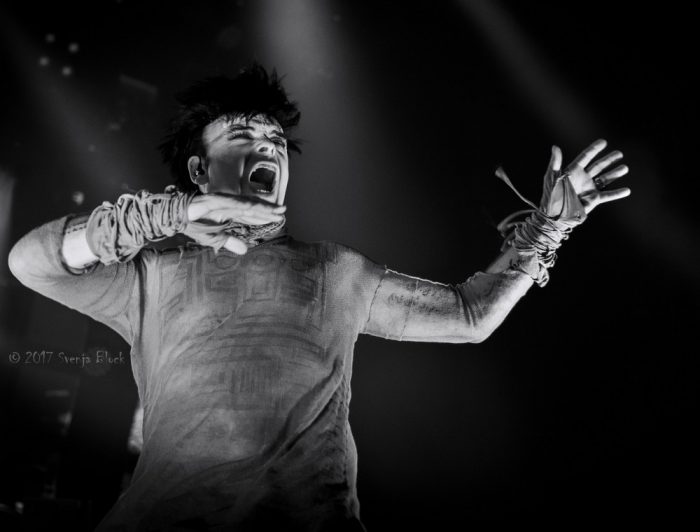 The packed Brixton Academy seems to love the supporting act Jayce Lewis, who is familiar from Numan’s previous tours and has been praised by the man himself as the best supporting act he has ever had. The young Welsh artist has also gained some recognition from Steve Strange, who actually made his final recordings together with Lewis before he sadly passed away in 2015.

I am watching the supporting act from behind the crowd, standing at the back of the beautiful venue and it is surprisingly loud, and though as a keen music supporter and concert goer I am used to it being loud, this seems – errr – loud-er.

Jayce Lewis´ performance is good, alright, but admit to being impatient and wanting to see what I came here for – Gary Numan.

The master enters the stage at 9pm and opens with “Ghost Nation” from his masterpiece SAVAGE. The wall of sound is massive instantly, absolutely amazing, but by no means too loud anymore. The audience know the lyrics and sing along to the chorus – their mobile phones are already out in force ready for the challenge of capturing a lasting moment of what’s going to be a night to be remembered.

Numan’s career has lasted 38 years so far (I just wrote it before), but somehow the man looks barely 38 years young (has he discovered the fountain of youth?). Here he is, determined, focused, observant, happy and keen to release his pioneering visions of creativity. Opposed to all the people in the audience that are dressed in their gothic black, he is wearing light coloured garments against his black, spiked up hair which provides a striking contrast. 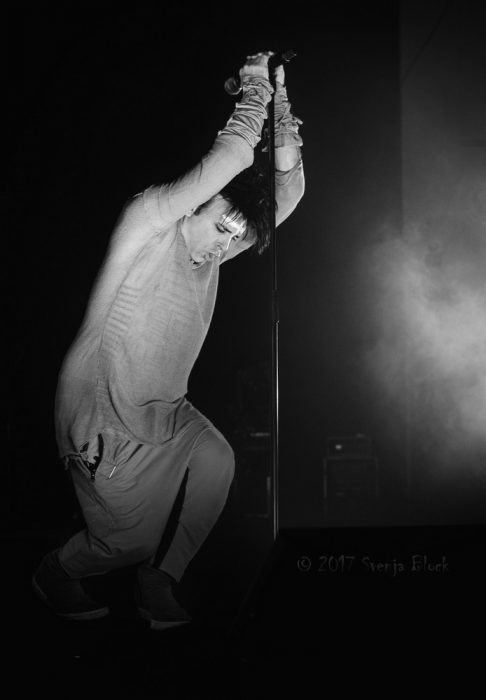 The show continues with ‘Metal’, a song originally taken from The Pleasure Principle album, and famously covered by Nine Inch Nails in 2000. ‘The Fall’, published in 2010 follows and at this point we are taking a time leap to ‘I´m An Agen’t’  from 1980. Interestingly, it all sounds fluent, even timeless, as if it could easily all be from the same era.

The Tubeway Army song ‘Down In The Park’ came out in 1979, before Mr. NUMAN launched his solo career and has since been covered by Foo Fighters and Marilyn Manson. It’s a classic piece that gives the fans in the audience  an opportunity to reminisce about past times and make them even happier if possible because people are all smiles, dancing and singing.

The most touching moment of this gig for me arrived during ‘My Name Is Ruin’ (the recent single from the newest album Savage), when Numan is joined on stage by his 12-year-old daughter Persia, who can be seen in the official music video of the song. She is singing the backing vocals and her proud father is smiling – not with just the whole of his face but with his whole body. Her mother, Gemma Webb is seen on the balcony watching the performance and looking down at the audience. People are in awe. In my opinion, ‘My Name Is Ruin’ is one of the best music singles to come out in 2017.

After this we finally get the eponymous ‘Cars’, probably the most iconic song this man has ever written and I would bet there are not many people who have never heard it before.

The audience is expecting nothing less than ‘Are Friends Electric’ to be delivered as an encore – it’s another legendary Tubeway Army hit from 1980 that made Gary Numan known to the general public for the first time. I like to point out that he looks happy. He feels happy. We actually hear him talking to us in between songs and from what I understand this is unlike him.

I was dancing with the fellow Numanoids in the flashing lights,  the neverending sea of changing colour themes… joy is contagious. The joy of experiencing something unreal (Unreality TV, anyone?) and sharing it with a huge crowd of other equally fascinated people. It makes you electric, like the friends you just made – maybe just for the night, but what does that matter? The connection was there and it was strong. Ugh! – I have spoken.

Savage Songs From A Broken World is out now via BMG.

More info on Gary Numan can be found on his official website: https://garynuman.com

All photos © Svenja Block. You can find more of Svenja’s photos at her Flickr, Facebook and at her Louder Than War author’s archive