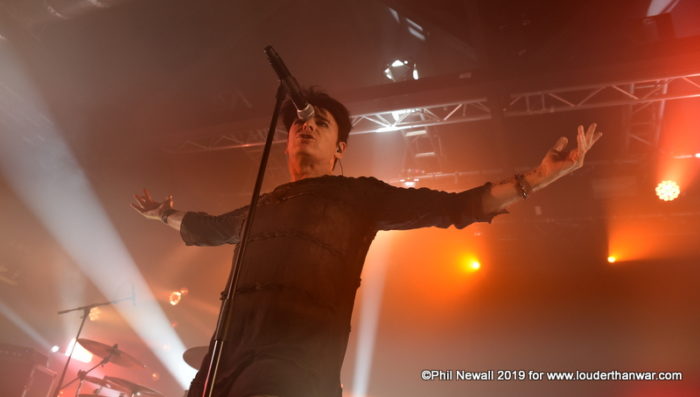 Gary Numan (read in depth interview here from 2018)  brought his 40th anniversary (R)Evolution tour to Liverpool, the tour marking the transition from the band name Tubeway Army to Gary Numan in 1979.

Tubeway Army had released ‘Replicas’ in April that year, the album shifting 100,000 upon release and the single ‘Are Friends Electric?’ took Numan to both No. 1 in the UK charts, and into the nations living rooms courtesy of multiple Top of The Pops performances.

Some 4 months later ‘The Pleasure Principal’ was released under the Gary Numan name, the album taking the No.1 position as did the single ‘Cars’, a feat repeated in several countries, so I guess Gary has fond memories of the year.

Having previously (heavily) toured 2017’s ‘Savage: Songs From A Broken World’ and already announced the follow up ‘Intruder’ I guess Gary was at a bit of a lose end, so it was time to hit the road!

The pre-tour Numanoids online chatter was rife with rumours as to the potential make-up of the set, without a current album to promote many hoped he would revisit some of the darker recesses of his huge back catalogue; it did however remove him of a theme, so the Savage post apocalypse outfits were gone, the band instead dressed entirely in black, with guitarist Steve Harris wearing makeup that made him look either beaten up or early stage zombie.

Numan himself was in blue jeans and a long loose-fitting black top, as ever that huge mop of blackened hair threatening to cascade down his face as he launched into a cavernous ‘My Name Is Ruin’, immediately Numan is traversing the stage, he stoops, explodes upwards, huge dramatic postures perfectly choreographed to the song as the stage is lit by a wall to wall backdrop displaying his daughter Persia from the ‘Ruin’ video who provided the recorded backing vocals. 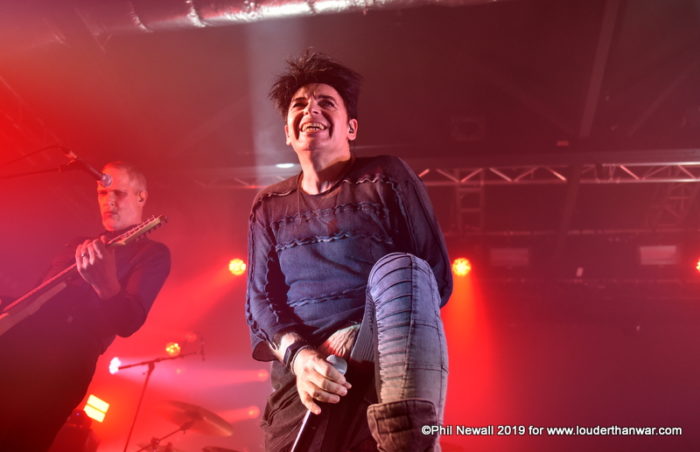 Numan then takes us on a potted history of his career, we get an industrial behemoth rendition of ‘Remind Me to Smile’ from the Telekon album, ahead of ‘Ghost Nation’ lifted from Savage; despite the near four decades between these tracks its remarkable just how well they sit together, similarly with ‘Metal’ an ominous grinding riff that has the capacity audience bouncing along; Numan traverses the red washed stage, whilst Steve Harris and regular bass player Tim Muddimann drive each other forward, Numan at one point retreating to his trusty Virus synth, the sounds shimmering over the dystopian maelstrom.

We are taken back to 1997 as ‘Absolution’ is delivered in front of a video wall displaying recent world atrocities including 911, barrel bombs in Syria, public executions, warhead launches, and concentration camps; what was noticeable was just how effective Harris’s live guitar can be, this is something I believe Numan should rely upon more often.

‘I, Assassin’ is arguably the album that turned many away from Numan as he explored a funky groove-based sound, here tonight whilst the song retained its identity it was treated to some added bite, taking on a darker and welcome menace.

We were brought back up to date with ‘The Promise’ from the Fallen, before revisiting ‘Cars’ which was delivered in front of a video backdrop showing the original 1979 promo clip with Numan performing in a red jumpsuit, its not Numan’s favourite track but here tonight with the added industrial bolt-ons it sounded huge, similarly with ‘Here In The Black’ with a lyric he almost spat out… his voice during ‘A Prayer For The Unborn’ was equally impressive; am I the only one who thinks Numan should rely less on pre-recorded lyrics that he adds live flourishes too?

He does sing live, but no one can move around a stage with the energy Numan puts in and get every single phrasing and vocal nuance pinpoint accurate, no matter the distance he is from the microphone the voice never dips. I know he is determined to deliver as near perfect performance at ever gig which explains his reliance on technology, but he should have confidence in his own voice, and the ability of his band to deliver.

Finishing with a rousing ‘Are Friends Electric?’ a track that largely brought synthesisers into the public consciousness and despite the 4 decades retains its magic.

Encoring with ‘Voix’ a mid-career piece that is from the generally ignored ‘New Anger’ album, I was pleased to see how well it had been adapted to his current sound, this ahead of a stunning ‘Down in The Park’ with its ice cold synth line sending shivers down the spine. 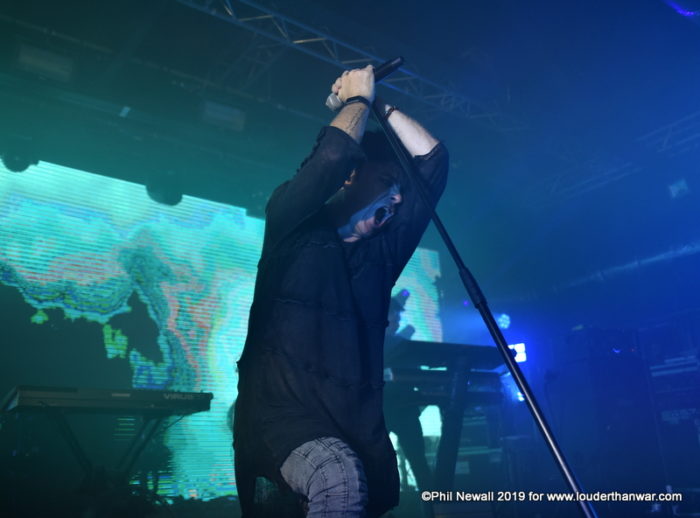 Numan then took the opportunity to thank the audience, before introducing a “rough as fuck” ‘Intruder’ the title track from the forthcoming album; suitably bleak and nightmare sounding, with clear nods towards Hans Zimmerman and Benjamin Wallfisch ‘Blade Runner 2049’ soundtrack, it was raw, passionate, played with a level of trepidation that gave it real energy.

He ended with semi acoustic fan favourite ‘Joe The Waiter’ which again forced Numan to rely entirely on his own voice and was the greater for it.

Numan remains a man on top of his game, his influence resonates today, and is readily credited by the likes of Trent Reznor, early techno DJ’s and on to Little Boots; his music continues to develop, to evolve and as such remains entirely relevant, and after four decades that is impressive.