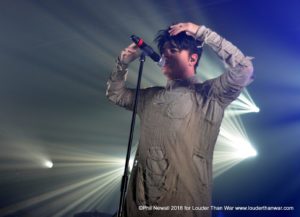 Gary Numan returned to Liverpool as part of the second wave of his ‘Savage’ tour, having initially showcased the chart topping album prior to its release at a troubled 2017 gig held at the Liverpool Exhibition Centre; there was nothing wrong with Numan’s performance, he was however hampered by being expected to perform in a venue designed for annual Tupperware conventions, which by anyone’s reckoning is a far stretch from the dystopian world of ‘Savage’.

The Academy provided a more traditional, and welcome rock ‘n’ roll environment, the stage swathed in clouds of dry ice as the short intro music built, immediately exciting the sell-out crowd. Numan stepped out dressed in the now familiar ‘Savage’ stage outfit; he is flanked up front by guitarist Steve Harris and bassist Tim Muddiman, an LED glow emitting from a row of large rear screens illuminating the entire band, which as the intro faded launched straight into Savage opening track ‘Ghost Nation’ before taking us back to ‘Halo’ from the 2006 Jagged album.

Numan himself is pin-balling the compact stage, weaving between both Steve Harris, who seems intent on toppling from the stage and Tim Muddiman who has turned the playing of his guitar into an act of violence such is the savagery (sorry) deployed as he rips at the chords; for the classic ‘Down In The Park’ Numan prefers to wrap himself around his mic stand as the entire stage is colour washed in blue and purple hues interspersed with solar strobes illuminating the band. 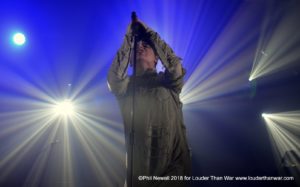 The sound is fantastic, I was stood to the front (audience) stage left, a rich sonorous vibe wrapped around the crowd, particularly benefitting both the soft vocals that enrich the eastern vibe of ‘Bed Of Thorns’ as that builds climatically, and the stabbing keyboard refrain of ‘Pray For The Pain You Serve’.

Numan, not known for his displays of emotion was clearly breaking his own rule; whilst he says little to any audience, the smile across his face was clear to see, the subtle interaction between the entire band displays a group well on their game.

Numan’s current band are possibly his strongest and most cohesive in many a year, and are well able to deliver his vision, be it material from ‘Savage’ or ‘Haunted ‘ as we were returned once again to the Jagged era; that opening riff sounded immense, which perfectly set us up for ‘Mercy’ then ‘Love Hurt Bleed’…sadly his daughter Persia wasn’t able to appear in person for ‘My Name Is Ruin’ though her image was projected from the screens as Harris and Muddiman effectively jousted across the front of the stage, which at times amused Numan as a telling smirk emerged from beneath the jet black hair. 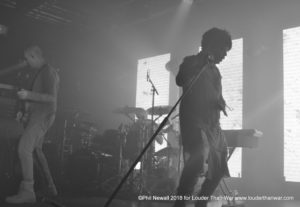 ‘Cars’ the track that Numan luminaries including Trent Reznor have credited as being a guide is delivered as a twisted, ferocious behemoth; Numan is not shy in expressing his dissatisfaction with the track, but here and now due to the re-workings, it has become a dark, bleak glimpse complementing the lyrical theme which fast forwards us to ‘When The World Comes Apart’, the stage ablaze of myriad colours, Numan’s voice soaring above the pummelling drums and swirling synths.

The set closes with ‘Are Friends Electric’, a track which for many other artists would have become a lumpen albatross, approached with almost dutiful foreboding, no such nonsense for Numan; similarly to ‘Cars’ he has transformed the once synth driven glimpse into pop’s future into a colossal proto industrial masterpiece that both he and audience gorge upon.

A clipped “thank you so much” sees Numan leave the stage, returning minutes later to give a surprising and impromptu remark thanking the Liverpool crowd for their enthusiasm before closing with ‘Prayer For The Unborn’ and the epic ‘My Last Day’. 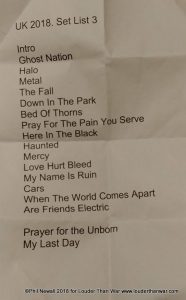 Gary Numan delivered a genuinely perfect blend of both past classics and current material, interspersed with references from his entire 40yr career; and that is the key.

Numan could have so easily retreated to the likes of the Rewind circuit and soaked up the royalties, instead he continues to create, to evolve, to push the boundaries from Android to Savage – we all wait patiently for the next chapter.