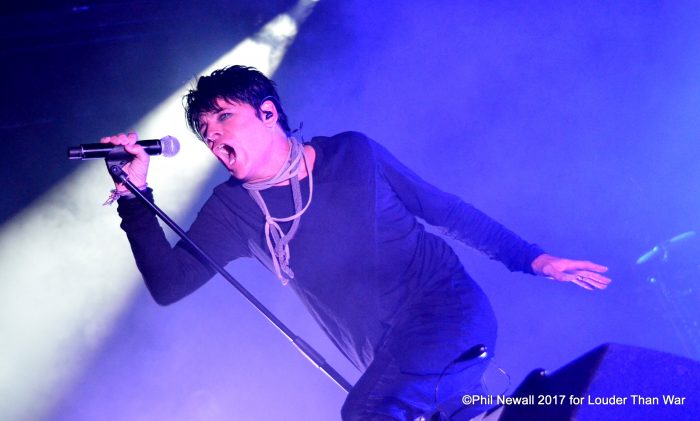 Ahead of the September release of new album ‘Savage: Songs From A Broken World’ Gary Numan announced just four UK dates; these dates would be the first opportunity to hear some of the finished material from the album; as such expectation was high and these gigs were going to be busy. This Liverpool date was packaged under the ’50 Summers of Love’ banner and complimented a show by Brian Wilson the following day; the promoters electing the Liverpool Exhibition Centre as the venue, the first live music event at the LEC.

Why am I detailing the venue? Because as a venue for a Numan gig it fell way short of what the black clad masses expected or deserved; you entered depending on which ticket you had; standing or seated. I’ll take a chance and suggest that when pre-sale opened months ago there was a feverish rush for standing tickets, you then get the opportunity to get closest to the stage…plus Numan grinds out some of the heaviest riffs around – not best appreciated from a sedate chair, your feet firmly affixed to the floor; so, having secured a standing ticket you were ushered in – the room is a huge multi-purpose cavernous box divided by heavy curtaining, resulting in a chicane effect to actually get in were you were confronted by the stage in the distance, naturally people made towards it only to find it firmly barriered off, in-front of this was perhaps 30 rows of seats right down to the stage front; the least likely ticket now providing literally the best seat in the house!!

As the lights dipped and the smoke billowed from the stage we were uncomfortably stood in an air conditioned sanitised box; despite this the familiar crowd chants of ‘Numan, Numan’ provide a lyric to the darkly ambient intro which welcomed Numan and his band onto the stage before launching into ‘Everything Comes Down To This’ from the 2013 ‘Splinter’ album, the stage is washed in blue, Numan entirely in black contorts himself around his microphone stand as the machine textures build around him, that distinct vocal delivery that can only come from Numan, before he explodes across the stage as the tracks metallic signature riff ricochets around the venue – Numan is contorted on the stage, back arched reaching upwards before dropping to the floor crouching as if ready to pounce, Numan continued to reference his past offering up both a glacial ‘Films’ and ‘Metal’ from The Pleasure Principal ‘Metal’ has been transformed into an immense mechanised wave of sound which as it faded Numan stepped to the front of the stage.

He is not known for stage banter; and what we got wasn’t banter; raking his arms across the seated area he spat out “this is shit” before instructing those seated toward the front of the stage; sadly those already stood, fenced off, had to look on as a huge crowd surged to the stage front as Numan without introduction showcased ‘Bed Of Thorns’ from the forthcoming ‘Savage’ album, a sensuous piece that hinted at the Eastern influence evident throughout the album; Numan himself adopting more sinuous movements as he slowly spun around the stage between piercing shards of white light leading us into ‘We’re The Unforgiven’ the pace building throughout.

Despite the shortcomings of the venue layout the sound is thankfully magnificent and allows the full layering of Numan’s material to shine; this was particularly evident when he led his 12yr old daughter Persia onto stage who provides the mystic tinged backing vocals on ‘My Name Is Ruin’ the lead single from ‘Savage’ – what she lacked in stage presence, she utterly dwarfed with her vocals which soared across the thunderous bass before joining her father for the “my name is ruin, my name is vengeance” chorus, this might have been a Numan gig with all the usual alien, and robot connotation but this clearly a very personal moment for Numan who hugged his daughter tightly as the track faded out. 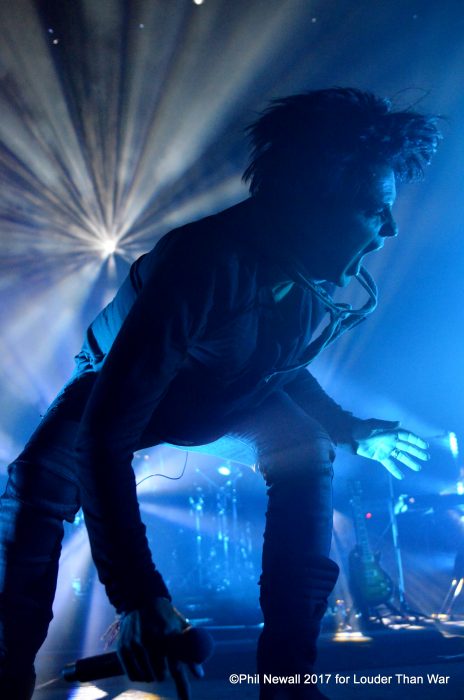 ‘Here In The Black’ hit hard, its ominously dark, the vocal barely a whisper, trampled over by a rubbery synth, and monolithic slabs of guitar driven by a metronomic drum beat that saw Numan pin-balling the stage, his arms above his head as if drawing on other forces before returning us to ‘M.E’ again from The Pleasure Principal with that immense riff borrowed to great effect by Basement Jaxx for ‘Where’s Your Head At’

The set closed with ‘Cars’ which over the (many) years Numan has re-modelled from the perfect pop that gave him his first solo No. 1 hit into a menacing noir behemoth that whilst being some 38yrs old still sounds like the future.

After returning to the stage to encore with a spine tingling ‘Down In The Park’ there was only one way Numan could fully close the set, the genre defining ‘Are Friends Electric’ and this audiences favourite robot prostitute song, Numan drops his guard, a faint smile revealed as he sings “And now it’s time to leave… you see this means everything to me” fully empathising the ‘this’ as he gestures to the faithful.

Despite the abysmal venue layout, Numan triumphed and effortlessly showed why he remains as vital now as he was when he first emerged; it shouldn’t be this way – after close to 40yrs he would be forgiven for enjoying the fruits of his labour, however that is not Gary Numan, he is clearly driven and we excitedly await ‘Savage’ the next chapter in this journey.

‘Savage: Songs From A Broken World’ is released on the 15th September 2017